RED: Lucid Nightmare skips opening cutscenes, title sequences, main menus and the humdrum of company intros. It immediately whisks you away to a quiet bedroom, where you stand before a neatly made bed. The calmness there builds an ominous vibe, as if hitting the sack is a potentially catastrophic event. Remember, the game is called Lucid Nightmare. Obviously, this first-person adventure doesn't screw around, and wants to get down to scaring you senseless right away. In order to accomplish that, our heroine needs to sleep. So you click on the bed to initiate a new game and slip into slumber.

You fall through the floor while a wide variety of images pass you. Derelict hallways, dungeon-like set pieces and creepy children float by as you continue to slowly plummet. The game's spooky theme plays all the while, reminiscent of popular psychological thriller shows. It melds with the scene's simple visuals and use of color to create an eerie atmosphere that should tell horror game lovers they're in the right place.

Eventually, you reach the point where you assume control of the protagonist, Mercedes, and can experiment a bit with RED's intuitive mechanics. If you've played any first-person title since Slender, you should be pretty familiar with the control scheme presented. Meanwhile, the masked child you saw while falling stalks you through a labyrinthine series of hallways and chambers. Worse yet, she's got a knife. Great, another game with knife-wielding children... You suspect that any minute she'll find a way past one of the barriers holding her at bay, and then she'll plunge that huge blade right into your chest, probably with a sinister giggle or two. 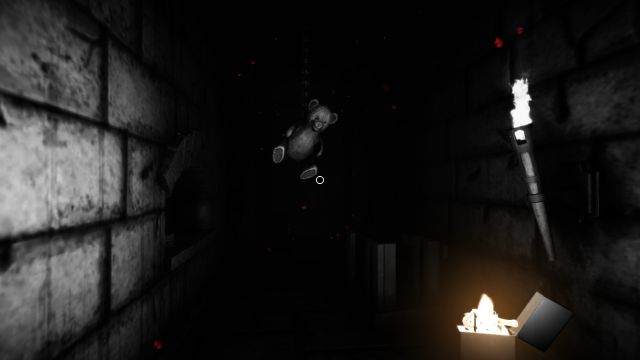 That's when you decide you don't want to press onward, but you must. You don't want to open doors or throw switches because you're almost certain that any major action will trigger a jump scare or chase sequence. However, RED's mysterious, dream-themed premise compels you to continue. The urge to understand the nature of these nightmares and how they tie into Mercedes' life proves too strong to be denied. So you press onward through the trepidation, aware that any moment the little girl will come for you. You reach a critical point and brace yourself for a painful death, but...

You find yourself at a desk, rather than dying on some cold stone floor. Documents surround you, all of them concerning missing persons. Your next step in the campaign is to speak with an investigator named Apollo via laptop, but if you're like me, you'll explore your digs first and try to ignore that sinister figure you saw walking past your back window. The first thing you might notice stands at odds with the opening sequence's terrifically simple presentation. Just outside your wide windows, a little off your property, lies a series of huge, flat textures that serve as the forest. I know RED isn't a AAA title, but it's hard not to notice those giant, flickering, tacky textures every time you creep past a window.

You might've also realized you can't strafe during the non-dream segments. If you look down, you'll notice... 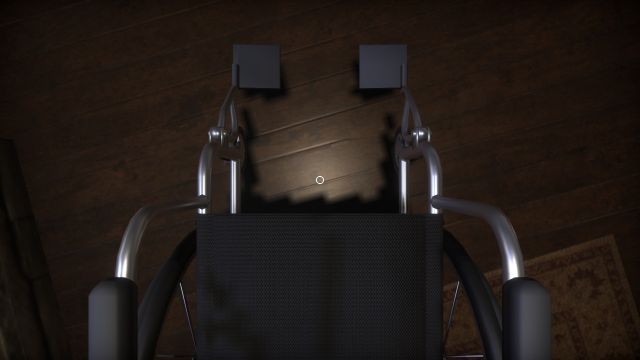 You're in a wheelchair. Imagine that level of depth this can add to any first-person adventure game, especially of the horror variety. It's cool to see some disabled representation, to be sure, but new, terrifying situations that horror games haven't explored are now on the table. One thing about this feature, though: 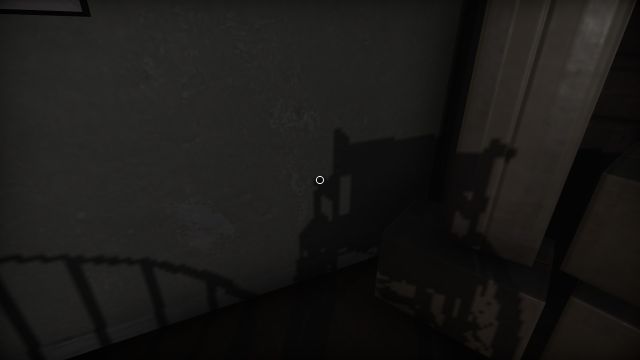 Only your wheelchair casts a shadow. Maybe there's a deeper reason for this, but it's nonetheless both unintentionally creepy and a tad cheesy. Flashbacks to the early '80s ghost flick "The Changeling" might come racing towards you.

RED doesn't beat you over the head with character development. It skips the now cliched type of opening segment, where a few paragraphs outline the game's setup and offer some background on your character. This title doesn't force feed you information, but puts you on a slow, steady drip instead. You catch bits and pieces regarding Mercedes, her disability, her father, her previous career, etc. Portions of her past crop up during chat conversations with Apollo, which consist of very terrific, natural dialogue over computer direct message sessions, complete with genuine small talk.

Segments with Apollo also allow you to view photographs and listen to any intel he's collected about his case. Based on what's presented, you can then ask him to look further into certain details. For instance, a missing child seems to be clutching a mysterious doll. Apollo might be up for burning the midnight oil to gather facts surrounding the object. You might also hear your companion speak about other disappearances, such as pets, travelers or homeless people. Could there be something spiriting away these innocent civilians? Maybe Apollo can find out... 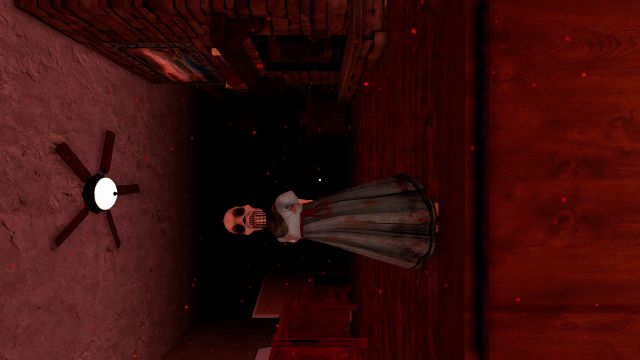 From this point onward, you advance through a pattern of segments: aid in the missing persons investigations, roam around your house, return to the nightmare. The in-home sequences grow steadily more eerie, thrusting you into situations where you blow a fuse or find yourself inexplicably locked in a room. Dream sections similarly grow in intensity, as the masked girl and her cohorts no longer have obstacles to block them. They approach you through pitch black halls, sometimes psyching you out and other times legitimately moving in for the kill. Your only defense against these fiends is a flashlight that can temporarily stun them. Of course, you need to limit your flashlight usage, because batteries are finite.

It all comes to a head during one dream maze, where multiple girls come at you, plus you need to find a key, plus the figure you saw outside your house occasionally pops up, plus traps all over the dungeon threaten to stymie your efforts. In a final, heart-pounding segment, you nab a key and race towards the exit while monstrous giggles and roars cry out from the darkness. You run blindly through tunnels, shining your light in random places and hoping you manage to paralyze your foes before they can chop you up. You struggle to remember the path back to a pair of double doors that serve as the egress, and feel the panic rise all the more as you step on a bear trap. You look down to open it, only to hear an apparition approach you. You ask yourself at that point: do I shine my light around the vicinity, or do I stop to undo the trap and risk getting butchered while I pull it open?

After only a few maze sections, you hit a finale of sorts and a dreaded To Be Continued... ending. If you look on RED's store page, it says outright that this is only chapter one of an episodic adventure. For me, the final play time was a little over one hundred minutes. RED: Lucid Nightmare definitely has me interested, but I can't hide my disappointment over its lack of content. Even for a first episode, I felt like I barely got my feet wet. I've played a lot of games that ended that culminated in "to be continued" or that served as "episode one" or "chapter one," but had no follow up. I don't want RED to be one of those games. Yeah, it's a terrific start to what could be a great episodic horror experience, but its primary chapter only offers so much material to get things started.

If you enjoyed this RED: Lucid Nightmare review, you're encouraged to discuss it with the author and with other members of the site's community. If you don't already have an HonestGamers account, you can sign up for one in a snap. Thank you for reading!

© 1998-2022 HonestGamers
None of the material contained within this site may be reproduced in any conceivable fashion without permission from the author(s) of said material. This site is not sponsored or endorsed by Nintendo, Sega, Sony, Microsoft, or any other such party. RED: Lucid Nightmare is a registered trademark of its copyright holder. This site makes no claim to RED: Lucid Nightmare, its characters, screenshots, artwork, music, or any intellectual property contained within. Opinions expressed on this site do not necessarily represent the opinion of site staff or sponsors. Staff and freelance reviews are typically written based on time spent with a retail review copy or review key for the game that is provided by its publisher.