The cyberpunk genre is rarely as well presented as it should be, partially because most developers themselves havent the slightest idea how to present it in the first place. Sometimes, theyd opt for an overly-complex hardcore approach, confusing newcomers with countless rules, ideas and staples of the niche genre, thinking that we should, as fans, already know what the hell they are talking about. Failing that, the other extreme has a go at weaving a good futuristic story but fails miserably since beneath the shiny neon-tinted wrapper, you find a rotten core based upon shoddy understanding and with it a terrible experience, forever to be damned and its name uttered with the greatest of loathing.

However, from time to time there is a gem hidden amongst the crap. Sometimes theres something, hiding out there that youve never heard of it, that youve never seen written about on countless magazines, or splattered all over the internet. Maybe, just maybe, there's something to be said about a title that falls through the cracks.

Dreamweb is a game youve probably never heard of, and are all the poorer for it. 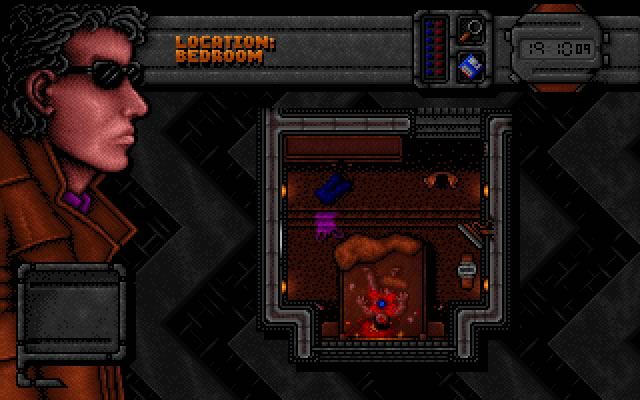 In Dreamweb you play the role of Ryan, a young man working as a bartender. Nothing really sets him apart from the other people in his bleak future, except for the fact that for the last few months, Ryan keeps having disturbing dreams. Dreams that seem far too vivid to be chucked away as nothing more but an imagination running wild. The dreams keep telling him that he is the chosen one, the one that has to protect the world from evil by destroying the seven harbingers of calamity. Due to these dreams, Ryan keeps slipping in reality and ends up getting fired from his job. Being a worthless bum and drain on society he, like many others, spends his days watching what's on television, only to find a scrambled reception telling him that the first of the evil harbingers is in town.

Like every sane person who hears voices in his head, dreams uncanny dreams and can see stuff on television thats not there, Ryan decides to listen to the voices, to follow his destiny. It would be a much shorter game if he sought mental help instead.

The journey is viewed through the bird eye perspective and follows the man through various locations, ranging from his girlfriend's place, to abandoned churches or crackling television stations, all the time guided by the voices in his head and the prophetic dreams that tell him where he needs to go next. But saving the world is no easy task considering most of the evils that Ryan needs to exterminate are high ranking people with their own private armies of bodyguards, personal militia provided with measures far above that which a single man can go through alone.

For instance, one of the people Ryan has to kill is a famous rock star. People in such a position are usually accompanied by an entire cadre of highly trained personnel responsible with keeping the said person alive. So Ryan has to find out what hotel the star is checked in with and make his own reservation to be close to his target. At some point in the evening, he can find a way to the penthouse elevator, eliminate the bodyguards at their weakest moment and find his way upstairs to discover the rocker enjoying himself in carnal delight with one of his numerous groupies. A bullet for each, and the mission is done. Perhaps an innocent had to get hurt in the process, but Ryan is a realistic man. Sacrifices need to be made for the greater good, no matter how queasy they make him feel. 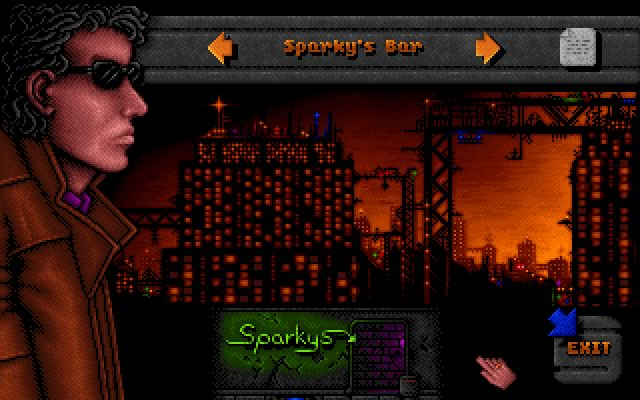 There are many situations where you have to make a decision that goes against every social norm that youve been taught, further lessening Ryans slippery grip on reality, easing him further into a quagmire of sex, scandal and violence. All set against a backdrop revealing in the inspirations set by Blade Runner, Shadowrun and playing out like a dated Fahrenheit done right. Made in the early nineties, its one of the first games to incorporate graphical sexual themes, and a main character that is by no definition of the word, a hero. Hes not a knight in shining armour, armed with a flaming sword in hand and God as his protector. Hes not Neo to be able to control the Matrix in any way he sees fit. Hes a normal human being who has to get his hands dirty to get a job done in a disturbing setting that completely blurs the line between right from wrong.

After such important events, you will be transported to the Dreamweb, a place between realities where Ryan will have to face the voices that issue further orders to the man before returning to his normal life.

The games even bundled with a booklet called Diary of a Madman, which chronicles Ryans slow descent into madness he suffers before the start of the game, which even further asks the question if there really is something sinister behind this all, or if Ryan is simply a man crushed under the weight of his mortal mind. A broken and crazed individual on a personal crusade for his own twisted view on the greater good.

In the end it is up to you to conclude whether Ryan truly did enter the Dreamweb where he was given the task of saving a world, or if he's just a homicidal maniac suffering from extreme schizophrenia that decided to cut a bloody path through the world.

If you enjoyed this DreamWeb review, you're encouraged to discuss it with the author and with other members of the site's community. If you don't already have an HonestGamers account, you can sign up for one in a snap. Thank you for reading!

© 1998 - 2022 HonestGamers
None of the material contained within this site may be reproduced in any conceivable fashion without permission from the author(s) of said material. This site is not sponsored or endorsed by Nintendo, Sega, Sony, Microsoft, or any other such party. DreamWeb is a registered trademark of its copyright holder. This site makes no claim to DreamWeb, its characters, screenshots, artwork, music, or any intellectual property contained within. Opinions expressed on this site do not necessarily represent the opinion of site staff or sponsors. Staff and freelance reviews are typically written based on time spent with a retail review copy or review key for the game that is provided by its publisher.