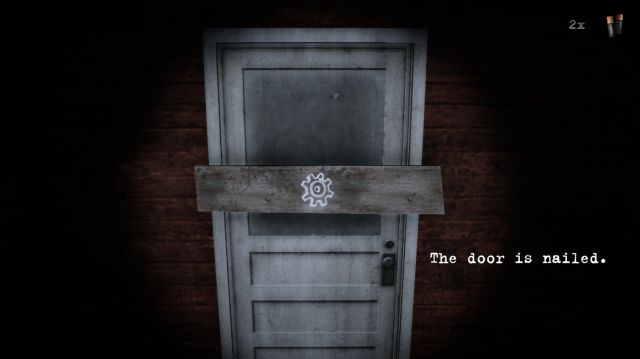 The opening phase of a horror story serves as a hook. Those early scenes are the tale's chance to capture the audience's attention and keep it watching, reading or playing. Even the most terrible films and books follow this structure, and succeed in convincing their audiences to trudge through torturous content in an effort to finish the story. I've sat through countless bad horror movies that started off with passable preludes, all because I wanted to see where their slightly intriguing setups would lead. Sometimes, though, you come across an intro so thoroughly devoid of character that you have to force yourself through the whole shebang without even the slightest incentive to do so. Even if the proceedings aren't terrible, a botched beginning renders immersion difficult. Indie point-and-click Behind the Door comes to mind...

Its campaign kicks off with a clumsily translated series of lines that outline the premise of about eighty percent of Steam's horror games: old house, bodies found, ghosts. Meanwhile, you learn only one thing about our hero: his name is John. Yup, this game is so vanilla that our protagonist has one of the most common names in the English language, and exhibits no other standout qualities.

Except that John is apparently not very bright, and neither is his boss. Our man travels to the aforementioned creepy old house in the middle of nowhere, with obvious plans to break and enter. Strangely, John never stops to think that maybe whatever killed those people is still present in the house. The opening dialogue between him and his boss suggest that they're both skeptics, so you'd think he'd blame a gas leak or something logical on the killings. The point I'm getting at is that John has no good, logical reason to come to this house, and his motivation is just flimsy. We haven't even gotten past the opening cutscene, and already the wheels are coming off the bus. 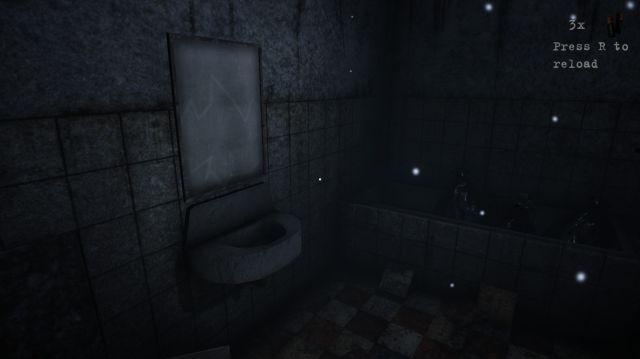 Oddly enough, the police aren't conducting an official investigation of three dead bodies, so the journalist is free to waltz right in as he pleases. Oh, but John didn't bring any tools, and the front door is nailed shut. He could've solved a handful of the campaign's puzzles using common items that anyone looking to break into a house would've grabbed before leaving. However, absent-minded John forgot his pocket knife, tire iron, toolbox and lighter. At least he remembered a flashlight. Yeah, I know this all sounds like nitpicking, but you'd think someone on the writing team would realize this and craft more complex puzzles that John wouldn't be able to solve easily.

But then again, they also could've offered us a more believable protagonist with a motivation that makes sense...

Unfortunately, almost all of the challenges John faces are simple as can be. The dude can't get into the shed, but the lock on the door appears to be rusty and weak. The answer to this riddle lies mere feet away. Later on, John encounters a buried door, and finds a shovel only a short ways down the hall. A drawer in a study contains a picture that looks precisely like the painting downstairs, and you know straight away what you need to do next.. John even says, "Hey, that picture is the same as the painting downstairs," beating you over the head with an obvious clue that leads to a "hidden" event item.

When Behind the Door tries to offer more thought-provoking puzzles, it still falls flat. You come across a door with rope tied around its knob. By this point, you should have a gas can and a lighter. It doesn't take a genius to figure out you need to fill the can, douse the rope and set it ablaze. Once again, the game tries to throw you for a loop by telling you the knob is now too hot to twist. That issue's nothing a mug and the only place in the whole house that has running water can't fix... 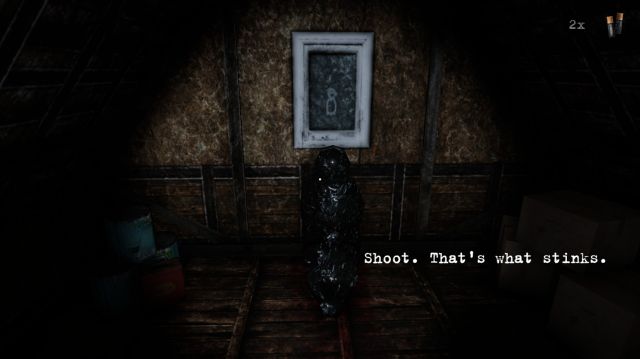 Meanwhile, no story unfolds. You poke into a handful of rooms and glimpse a lot of standard haunted house material, but discover nothing special about the abode or our hero. Nearly all of this campaign consists of puzzles that involve locating an event item and placing it somewhere else. You can pretty much clear the whole affair by clicking all over the place and occasionally summoning your inventory.

Regardless of the yarn Behind the Door attempts to spin, the game should still offer a few memorable chills. However, its interactive and narrative bits are so dry that you can't help but disengage yourself from the experience. Even if you were to become fully invested in this point-and-click, you would only find more disappointment and plain, cliche content. Phantasmal footsteps thump across dark rooms, and a mysterious assailant occasionally knocks on the walls. Mirrors shatter, a cross flips upside down and lights are suddenly extinguished. Of course, we also can't forget the bloody foot and hand prints that materialize out of nowhere, and written messages telling John to GET OUT. Most of these tricks are beyond standard. They're so old and worn out that even bottom-tier directors and writers won't touch them. 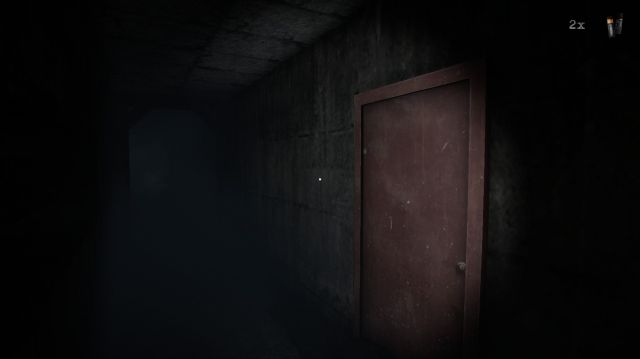 This title won't thrill you with its attempts at terror, but it prides itself on one thing: its ending. The mobile version of Behind the Door sports two endings, with one that promises a sequel. The PC iteration, however, is more uncompromising. There's only one ending on offer, and it tries really hard to set itself apart from the sigh-worthy content leading up to it. Where everything else was safe, harmless stuff, the ending is a little more brutal, albeit brief. Sadly, though, once it commences you only end up staring at the screen and thinking, "So that's it? That's the best you've got? I slogged through all of those banal puzzles for this?"

Behind the Door's campaign lasts about thirty minutes, though you can finish it in half that time, assuming you know where all of the items are located. In other words, you're looking at a horribly unoriginal point-and-click horror title, stacked with about fifteen minutes of vapid content that you can get almost anywhere else. Behind the Door isn't awful, but it's so plain and joyless that it isn't by any stretch a worthwhile haunted house simulator.

If you enjoyed this Behind the Door review, you're encouraged to discuss it with the author and with other members of the site's community. If you don't already have an HonestGamers account, you can sign up for one in a snap. Thank you for reading!

© 1998 - 2022 HonestGamers
None of the material contained within this site may be reproduced in any conceivable fashion without permission from the author(s) of said material. This site is not sponsored or endorsed by Nintendo, Sega, Sony, Microsoft, or any other such party. Behind the Door is a registered trademark of its copyright holder. This site makes no claim to Behind the Door, its characters, screenshots, artwork, music, or any intellectual property contained within. Opinions expressed on this site do not necessarily represent the opinion of site staff or sponsors. Staff and freelance reviews are typically written based on time spent with a retail review copy or review key for the game that is provided by its publisher.