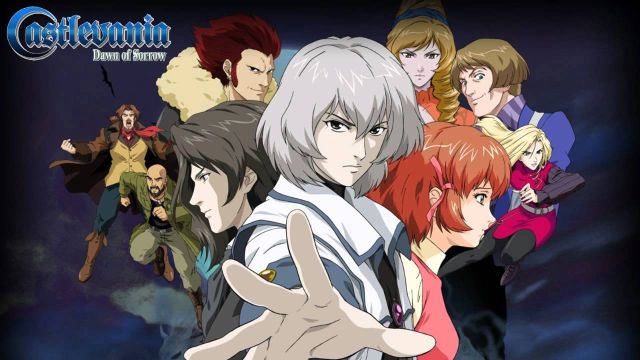 Dracula is dead, slain by the vampire hunter Julius Belmont. It took a millennium, but the morning sun has finally, truly vanquished the horrible night. However, not everyone rejoiced. As we all know, a little crazy can ruin a good thing. The villainous cult leader Celia Fortner took it upon herself to resurrect the dark lord by awakening his powers from within their current host, Soma Cruz (the protagonist of Castlevania: Aria of Sorrow).

Celia's plans involve more devious details, but Soma aims to put an end to them and rid the world of Dracula permanently. So he returns to the vampire's castle to battle this new menace in a Metroid-style adventure entitled Casstlevania: Dawn of Sorrow. Castle Dracula consists of a handful of themed levels, each with intertwining hallways and chambers. You don't receive much guidance from NPCs or objective points that appear on your map. Rather, you leap into the labyrinthine structure yourself, only returning to key regions and dead ends when you've acquired the means to press onward and survive.

Once again, you explore familiar grounds, battle an army of demonic and mythological creatures and randomly absorb their souls when you defeat them. As with Aria, each soul grants you various powers and abilities when equipped. Some act as sub-weapons, providing you with the ability to toss deadly implements, ranging from disembodied bones to massive spears. With more a powerful soul, you can even summon a cloud of locusts to swarm your enemies, handy for fighting off multiple airborne nuisances. Other souls act as passive abilities, thereby boosting stats or granting you protection from various conditions. Some also bestow special abilities unto you, allowing you to reduce falling speed or double-jump to clear wide chasms. 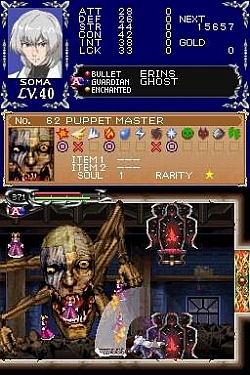 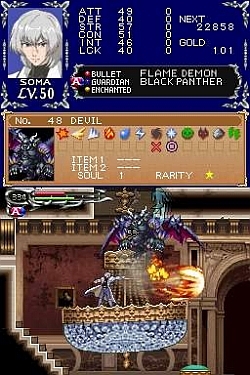 We've been there before, though. Dawn needed to expand upon its predecessor's concepts, lest it run the risk of needlessly retreading content. Konami's most obvious move would've been to retool the previously described soul system, but they left it mostly unaltered. Instead, they expanded other fronts, and Dawn was much better for it. For starters, this installment comes with improved visuals. Dawn is a visual treat in comparison to its antecedents, and not just because it plays on a more advanced platform. Not only are the graphics crisper and more well defined, but there are multiple background layers. You don't only see the snowy foreground and a wall in the distance, but a whole field and a forest blanketed in frost. Later in the same region, you can spot a distant village, complete with detailed houses and vehicles.

Dawn's stages are nothing new, thematically. By now, we've explored wizardry labs, clock towers and subterranean departments numerous times. However, familiarity in this case is no biggie, especially with the gorgeous stages this sequel offers. For instance, I love the watery tones used in the region called Subterranean Hell. The area's algae-covered rocks and virgin blue waters create the impression that this grotto was left untouched for millennia, and still has yet to be fully corrupted by Dracula's forces. You also have the Silenced Ruins, decked out with recognizable white walls, earthy draperies and massive windows. Yes, the stage is a huge throwback to the original game's primary level, unfortunately fallen into disrepair. It's as though the castle itself shuffled this iconic locale to the furthest corner of the premises to be forgotten, where it withered and decayed. Visually, it's a beautifully haunting, somber and modest, level to behold.

Dawn's breathtaking visuals aren't limited to environments, either. Enemies throughout the game look nastier and more devilish, and even perish in grander style. Offing ghosts, for example, causes them to erupt in a dazzling array of indigo sparks and wisps of smoke. Other creatures burst into displays of fireworks, crumble to meaty bits or explode in clouds of colorful gore. More than anything, spectacles like these are a terrific touch, and show that Konami put a lot of care into developing Dawn. 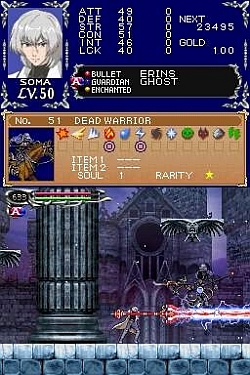 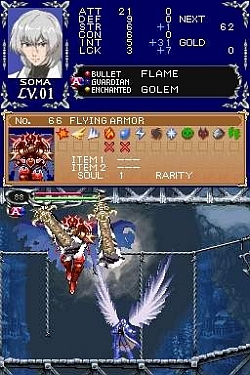 The game's improvements don't cease with its graphics, either, as it also features a killer soundtrack. The song "Pitch Black Intrusion" ushers you into the campaign itself, perfectly setting up the game's Gothic atmosphere with its synthesizer-like sound. "Platinum Moonlight," while not as exuberant as the previously mentioned cut, is another track that bolster's the game's dark and mysterious atmosphere. That and its opening section totally smacks of Black Sabbath's "Planet Caravan." There's also "Cursed Clock Tower," which immediately fires up with a frantic pace, as if the track is trying to instill in you a sense of urgency.

Boss battles in the previous game were not as enjoyable as they should have been, and definitely needed more love from the Konami. A Castlevania game should never have limp boss encounters, but that's partially what we received. Thankfully, Dawn takes bosses in a completely new direction, pitting you against horrific, challenging demons. As you enter, the track "Portal to Dark Bravery" builds in epic style, while another BGM called "Into the Dark Night" immediately kicks the pace up to eleven. That's when the Freddy Krueger-like Zephyr appears and freezes time, right before dropping a dozen or so knives on you. Or you battle a fire beast called Aguni, the living embodiment of another villain's powers. This guy floats above you, pelting you with waves of fire and crushing you with his massive palms.

During another segment, you cross paths with an imprisoned monster called Gergoth, who remained forgotten in the castle's depths. Though he broke his chains, his manacles remain clasped to his feet. Unfortunately, he spent so much time in the dungeon that he went blind and began to rot, as a grotesque display of protruding bones and ragged meat dangles from his gut. He attempts to crush you with a Mario-like leap, but also fires a tremendous laser from his mouth, because why not? Perhaps the strangest battle, though, places you opposite an anthropomorphic locust called Abaddon, who calls upon thousands of insects to pick your meat from your bones. 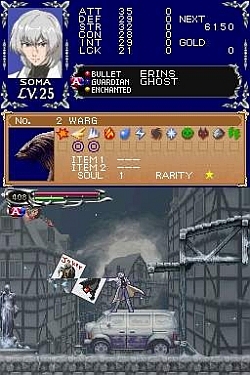 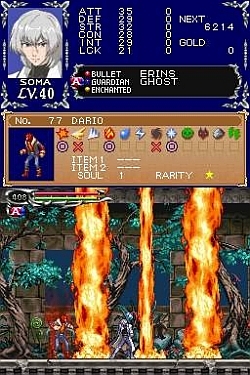 Plainly put: you cannot kill these beings. Celia pulled out the big guns this time around and summoned immortal creatures that can only be sealed away for a time. Whenever you defeat a boss in Dawn, it doesn't immediately wither away. A diagram appears on the screen, and you have but a handful of seconds to utilize the DS's stylus to draw a sigil to send the demon screaming back to the cold abyss. I don't know about any of you, but I've always found the idea of sealing monsters rather than outright killing them fascinating, and I'm glad to see it worked into a video game. Granted, Dawn's sealing system isn't perfect and requires some practice before you get it down pat, but it's an intriguing feature that the franchise sadly never explored again.

Dawn of Sorrow is likely the closest portable games will ever get to aping Symphony of the Night. Franchise chapters before and after didn't quite have the same level of grandeur as this one, though they do come close. Mostly, the game looks, sounds, plays like any 'Metroidvania' game ought to, and in possibly the best way. I get the feeling that this was the kind of game that the GBA iterations strove to be, and finally Konami nailed it. Unfortunately, Dawn's descendants were not quite as terrific...

If you enjoyed this Castlevania: Dawn of Sorrow review, you're encouraged to discuss it with the author and with other members of the site's community. If you don't already have an HonestGamers account, you can sign up for one in a snap. Thank you for reading!

© 1998-2022 HonestGamers
None of the material contained within this site may be reproduced in any conceivable fashion without permission from the author(s) of said material. This site is not sponsored or endorsed by Nintendo, Sega, Sony, Microsoft, or any other such party. Castlevania: Dawn of Sorrow is a registered trademark of its copyright holder. This site makes no claim to Castlevania: Dawn of Sorrow, its characters, screenshots, artwork, music, or any intellectual property contained within. Opinions expressed on this site do not necessarily represent the opinion of site staff or sponsors. Staff and freelance reviews are typically written based on time spent with a retail review copy or review key for the game that is provided by its publisher.