Konami must've figured they were on a roll. Shortly after they released Circle of the Moon, they unleashed another Metroid-style whip-lashing adventure, only this time starring an actual Belmont. Castlevania: Harmony of Dissonance allows players to assume the role of Simon's grandson, Juste Belmont, on a quest to rescue his childhood friend Lydie from the bowels of Castle Dracula.

Wait, haven't we been down this road several times already? I mean, Castlevania titles aren't known for their robust stories, but post-Rondo of Blood titles tend to include at least creative and entertaining premises. Evil cults, Dracula's powers awakening in teenagers, greedy merchants, desperate minions trying to resurrect their lord... That sort of content. However, Harmony marches in with the "let's rescue a maiden" storyline that pretty much every franchise older than the first PlayStation has covered. The concept lacks imagination, and it should come as no surprise that Harmony does as well.

I've played through Harmony three times, and yet I still struggle to remember the events that transpired during its campaign, the bosses and enemies I encountered and whole set pieces. For the most part, this is due to Harmony's lack of a truly standout features. There's little to distinguish it from its ilk, especially since its mechanics and world design are essentially the same as any other Metroidvania. Even the presence of a second identical castle to explore originates from an earlier title, Symphony of the Night. 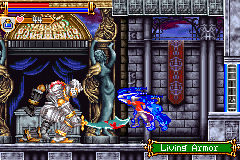 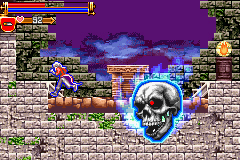 Retread doesn't stop there, either. Juste's dear friend Maxim also joins him in the search and eventually disappears. He later returns as the "master of the castle," another device robbed from Symphony. On top of that, we later learn he's actually possessed. How novel. A friendly character turns heel after coming under the influence of a wicked spell... Again, both Symphony and an older portable game called Castlevania II: Belmont's Revenge come to mind. While I don't expect Shakespeare from a Castlevania game, I'm not a fan of blatant, unimaginative rehash.

Thankfully, Harmony boasts mostly solid mechanics. Granted, Juste utilizes a peculiar jump, but not to the the extent that you can't acclimate yourself with the game's physics. Beyond that, he moves quite fluidly, especially when using either of his dodge commands or his Mega Man-like slide ability. The game processes Juste's actions timely, making for exciting combat and a lot of close shaves.

For the most part, the mechanical end of the game is transparent. I didn't find myself cursing missteps or blaming control response for my mishaps, especially when I was thoroughly engaged in exploring Harmony's vast castles. Harmony provides a plethora of hidden nooks and crannies packed with worthwhile treasures. Unlike Symphony, you don't discover a slew of useless weapons and outdated armor. Rather, I found that most of the armor I stumbled upon was actually useful at the time I nabbed it. It's as though the developers predicted the route players would take when progressing and planned equipment placement accordingly. Plenty of Metroidvania titles get that concept wrong, so I can only imagine that it's a tricky facet for developers to nail as soundly as Konami does here. 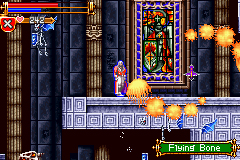 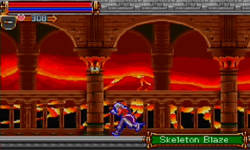 Exploration gives way to new rooms, fresh enemies and especially badass boss encounters. Harmony's rogues gallery may not be the greatest, but it still thrusts you into rugged and wild battles. One that had me on the edge of my seat featured a creature simply referred to as Devil. This guy took a hell of a beating before he finally fell, and he nearly took me out many times in the process. I spent just about every restorative item fighting him, and definitely exhausted my uncurse potion supply. Mostly, I had a hard time avoiding his burning fist attack. Harmony's other boss battles were decent enough, but weren't as entertaining as encounters from other titles in the franchise. Sure, it was nice revisiting some old friends like Cyclops, Minotaur and Legion (aka Granfalloon), but nothing about these conflicts particularly stood out. Mostly, I wiped these abominations out with a modicum of effort and moved on.

Castlevania: Harmony of Dissonance is by no means a terrible game. It's solidly built and a pleasure to explore, and it's quite engaging. For instance, there were a few times where I had to consider where to go next, which required me to examine the map and see which route possibly led to events that furthered the campaign. I especially had to study it for unexplored gaps that might aid me to that end. The only unfortunate misstep this game makes is that it isn't as memorable as its brothers. Sadly, Harmony is the middle child that will be remembered only by those who cherish it. The rest of us, especially those who like the game, will have to replay it several times throughout our lives to remind ourselves why we considered it such a solid title in the first place.

If you enjoyed this Castlevania: Harmony of Dissonance review, you're encouraged to discuss it with the author and with other members of the site's community. If you don't already have an HonestGamers account, you can sign up for one in a snap. Thank you for reading!

© 1998 - 2022 HonestGamers
None of the material contained within this site may be reproduced in any conceivable fashion without permission from the author(s) of said material. This site is not sponsored or endorsed by Nintendo, Sega, Sony, Microsoft, or any other such party. Castlevania: Harmony of Dissonance is a registered trademark of its copyright holder. This site makes no claim to Castlevania: Harmony of Dissonance, its characters, screenshots, artwork, music, or any intellectual property contained within. Opinions expressed on this site do not necessarily represent the opinion of site staff or sponsors. Staff and freelance reviews are typically written based on time spent with a retail review copy or review key for the game that is provided by its publisher.