Imagine a world quite unlike the one you live in. A world filled with children's laughter, a world where nothing but a plethora of positive sensations exists. A world of love, a world of peace. Perhaps a fool's world, but an idealistic one.

Did you imagine that? Good.

Now erase this Eden from your thoughts, replace with complete opposites, and you might find yourself picturing the world of Drakengard. Love? Long gone, devoured by ambition. Peace? Destroyed by a vicious civil war. And it is through this war and conflict are you instantly introduced to what Drakengard openly is. A depressing example of "wrong" versus "worse". Enter Caim, the champion of the "good", and the protector  and, perhaps even more importantly, the brother -- of a woman whose power alone is enough to protect the world from the dreaded Empire who will stop at nothing to defeat the Alliance and make certain their goals are met.

Now, Caim is not your typical hero. He does not wield a sword of Light that can cleave a galaxy in two. He also does not use power beams that can dig holes in the moon's face. He is your typical Square-esque angst-filled 'hero' -- and I do use the term 'hero' extremely loosely as the maniac is only seemingly happy when swinging his not-so-sharp sword through some Imperial swine in a series of painful way. As you will learn very early in the game, there are reasons for Caim's unquenchable anger against the Imperial dogs, anger that was strong enough to make him sign a contract with his in-game partner and pact beast. A mighty dragon that is only happy to help our hero make charcoal of his numerous foes. However, to make a pact, Caim must sacrifice something... and in his case it was to be the power of speech. Due to this, during the game you will hear only Caim's thoughts through the dragon, spoken by dragon.

Other characters that will join you will have to make similar sacrifices. One particular character, a very crazy elf, sacrifices her womb. One of her hobbies is eating babies.

This varied cast travels through a game divided into missions -- the order of which will open new paths and conclusions for your party. When you start the actual game you will see your character placed on an enormous plain with a legion of enemies rushing towards him, something slightly reminiscent of Koei's now already legendary Dynasty Warriors series. However, unlike within the aforementioned manly brawler, your character will not be half as agile as his rival counterparts, but will rather move like he has a broomstick lodged very deep and painfully in his colon. 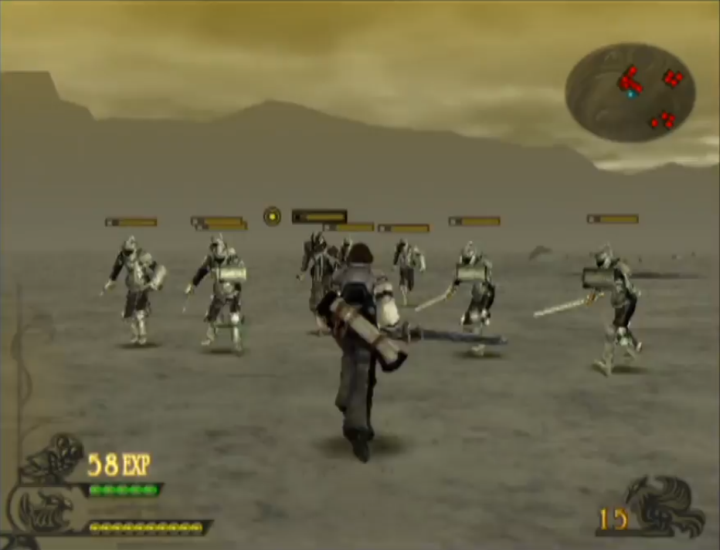 Throughout the game you will use the stiff-feeling Caim, his stiff-feeling chums, and, most importantly, the extremely powerful, if not stiff, dragon he made his pact with. About half your time will be spent on the back of your dragon, scorching the ant-sized enemies in a torrent of fire, as well as taking out warships and various flying pests with the odd well-placed fireball. Needless to say, you will deal with the enemies much more... efficiently in this manner. One fireball alone is enough to destroy a whole pack of enemies.

To counteract the ease in which your beast flame-grills his foes, Caim is obviously holding onto his fiery steed like a pansy, meaning that a mere arrow or two directed at the dragon will cause Caim to fall to the ground. In another attempt to avoid napalm death from above, a number of enemies cunningly wear armours resistant to fire, meaning you will only warm them slightly before dislodging from the dragon and introduce them to your sword/spear/axe/club/stave/dagger.

A wide choice of arms is present; in fact, Drakengard prides itself with a wide assortment of weapons that Caim can use, ranging from swords and axes all the way to spears and clubs. Every single weapon will grow in level -- and with that in killing proficiency -- as you slaughter enemies mercilessly. And every time a weapon gains a level a historical fragment of the tool of death is revealed. An interesting touch, certainly, but once you get ten weapons that look pretty much identical, you may find it more prudent to rely on just one or two preferred weapons. The game is easy enough to pass with the default, after all, and this is an option which many will take since some of the rarer blades are pretty hard to obtain. 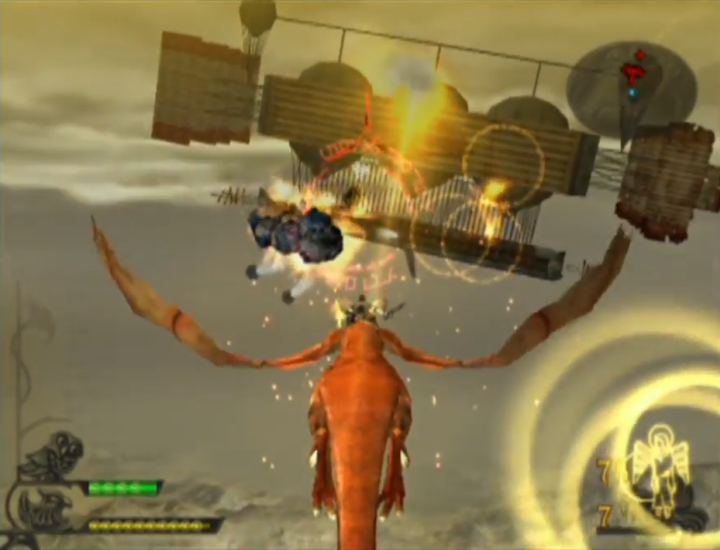 As you travel from one mission to the other, bludgeoning, maiming and goring, you will fail to be amazed at your surroundings. Glancing at the areas you walk, or fly, past will confirm that everything seems to look exactly the same. Broken up with the odd tree or an overused and poorly animated river added here and there, you would be forgiven in believing that the background is on a permanent loop. After you see nothing but fog around you as far as the eye can see for a handful of levels, and you are walking over the same greyish-brown surface which I can only assume the earthen ground, you will rejoice at even that single, reappearing tree when it makes one of its many showings.

One more thing that is almost as monotonous as the level design of the game is the sound. I am not talking about the music in the cutscenes, nor about the voice actors, some of which did a pretty decent job. No, I am talking about the mind-numbing, droning music that plays throughout every single level you are in. And trust me, if you are going for the secrets, some of these missions can take well over an hour to complete, which, when paired with that gratingly identical music all the time, will make you quite edgy. Throw-your-speakers-out-of-the-room edgy.

The presentation soon picks up though, thanks to the spectacular cutscenes that have the usual Square flare. And just like in most of Square's games, many of the people will invest in the game mainly to see every single scrap of CGI -- which will again take quite a bit of time. In a pretty nifty touch, each of the endings having their separate concluding cut scene.

Now, do not think that Drakengard is a bad game in any way. The way the characters move is a bit dodgy to say at the very least, and the sound is of the generic-annoying sort. Some weapons are needlessly hard to find, and the entire process is just as needlessly time consuming. However, what stands out in this game is the story. And the story is good.

It is very good.

You will find out what real warfare is like. Even in such a fantastical world where dragons and other mythical creatures live, you will find out that there is no romance in the war, but that it is a filthy, brutal affair. The number of casualties, as well as the sad story twists, will make you play further, just to see if the situation ever changes to the better. Will the protagonists ever live happily ever after or will they just become another of the casualties? Each of the roads you take to an ending is different, and yet again the overall premise, is that war is evil.

Now the choice is up to you. If you like these sorts of games, a game with a powerful story, beautiful cutscenes, interesting and original characters but with a lacking audio-visual performance, then this is your choice. However if you want to slaughter mindlessly in something more realistic, with characters that move much more....fluidly, then perhaps the Dynasty Warriors saga is for you.

The choice is, in the end, yours.

If you enjoyed this Drakengard review, you're encouraged to discuss it with the author and with other members of the site's community. If you don't already have an HonestGamers account, you can sign up for one in a snap. Thank you for reading!

© 1998 - 2022 HonestGamers
None of the material contained within this site may be reproduced in any conceivable fashion without permission from the author(s) of said material. This site is not sponsored or endorsed by Nintendo, Sega, Sony, Microsoft, or any other such party. Drakengard is a registered trademark of its copyright holder. This site makes no claim to Drakengard, its characters, screenshots, artwork, music, or any intellectual property contained within. Opinions expressed on this site do not necessarily represent the opinion of site staff or sponsors. Staff and freelance reviews are typically written based on time spent with a retail review copy or review key for the game that is provided by its publisher.