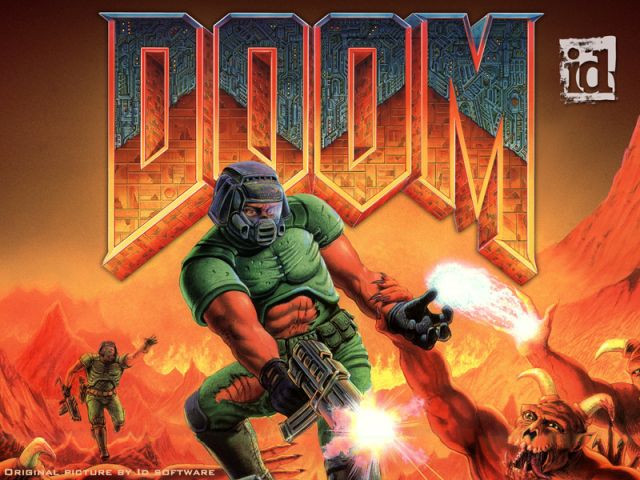 We all know the story of Doom. One man, hundreds of monster, thousands of bullets and seas of blood and spent ammo. Doom is an artifact, but a holy one; a game developed during a simpler time when all you needed was copious amounts of bloodshed, stiff challenge and wild, elaborately designed levels. It didn't need a compelling storyline or deep commentary to make it a classic. Doom is old school shooting at its finest: raw, brutal and straight to the point.

These simpler times didn't often use polygons. Doom maintains the Wolfenstein standard of sprites and pixels, while helping to take its genre away from stale presentation and single floor stages. The realms you visit offer more various terrain, complete with vistas and basements. Never mind these features, though, because you can see them in almost any game nowadays. Doom's biggest visual and aural strong points rest in its iconic imagery and now legendary sound effects. Bright pink devils race around the battlefield, snarling and chomping at you as you approach. Possessed, undead marines stalk the grounds, their bodies putrefying even as they walk. And with each blow they sustain, blood flies, body parts crumble and creatures collapse in campy, lovable displays of death.

The pure fury on offer also guarantees that you are almost never safe. If you lower your guard, the immense population of zombies, imps, Cacodemons and other hellish creations will converge on you and give you a pixelated beatdown with teeth, claws and fireballs. They'll leave you a smoldering, bloody mess before the dust settles. Players who remain aware of their surroundings, however, may escape with a few cuts and bruises. No space marine survives without quick reflexes and some semblance of a plan. You need to observe your surroundings and keep your mind on the mob, while utilizing whatever means becomes available. Combat may boil down to dancing circles around the enemy contingent, or strafing side to side, or ducking behind a corner. That way you deal with the opposition one or two at a time, delivering fatal shotgun blasts to demonic faces with relative ease. 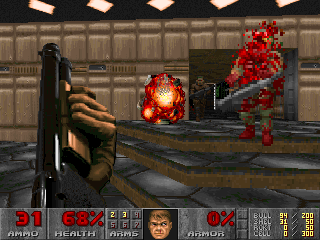 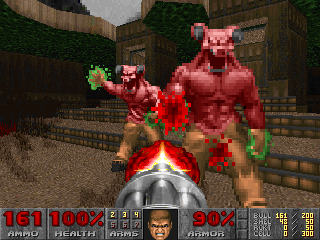 Oh, and you'll find plenty of opportunities to rearrange demonic mugs. Since Doom overloads you with scores of monsters, the game also stocks you up with fine weaponry and enough ammunition and firepower to set a small country ablaze. You'll peel cap after cap with a deadly chaingun, reduce foes to unholy chunks with a rocket launcher, control large crowds with an automatic plasma gun and tear the world apart with the legendary BFG.

Firearms in tote, you can confident strut through thirty-ish insane stages, each one elaborately crafted with various environmental devices, obstacles and hazards. You'll scour the Containment Area, a maze of UAC boxes with imps hiding in tiny crannies, ready to incinerate you with surprise projectiles. If exterminating monstrosities out in the open is more your style, there's Mt. Erebus, a level that sports plenty of empty space and small structures. Each building lies waiting for you to unwittingly open their doors via hidden triggers, allowing the damned to flood the battlefield.

One of my personal favorites is Halls of the Damned, a multifarious stage that plays more like several mini-stages fused together. It kicks off with a firefight against a Cacodemon, then spits you into a lake of poison, followed by sterile hallways crawling with zombies and imps. From there you'll plunge into dark, convoluted passageways where more Pinkies and Cacodemons play hide and seek. You'll finally end your tour in several interconnected chambers with more closed quarters and numerous beasts ready to pick you to pieces. Like Doom's other numerous stages, it's a well planned and developed level that makes use of some of the game's best qualities. 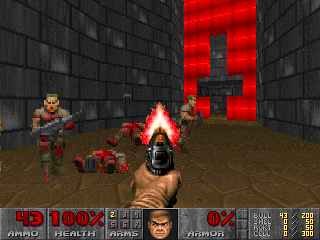 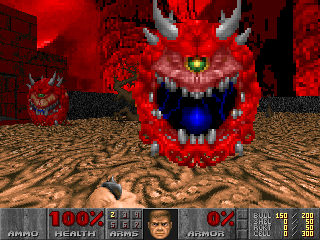 And one of those qualities: fear factor. Occasionally, you'll rush into a still, calm room with naught but a keycard sitting in the middle of it. At first you'll find the tranquility reassuring, so much that you'll snag the event item without a second thought. That's when the walls open up and dozens of foes pour out, their glowing eyes trained on you. That's terror of the Pavlovian sort, my friends. I guarantee next time you see a badass weapon or a keycard positioned on a pedestal or displayed in a beacon-like circle of light, you'll think, "Eff that. I'm going back the way I came." Or maybe you'll develop a spine and grab the item, then turn around quickly and pop off a few rockets, only to discover that the game was having fun at the expense of your sanity.

No matter how old I or the game grow, I'll always love Doom. No matter what new FPS seduces me into a few hours of vicious gunplay, I'll always go back to this one at some point. And no matter how much the genre expands and grows, I'll always dig the simplicity of Doom over realism for the sake of realism. Give me demons, deadly weaponry, gloriously outdated pixels and horrifying situations that I wouldn't have any hope of surviving in real life. Mars is my home away from home.

If you enjoyed this Doom review, you're encouraged to discuss it with the author and with other members of the site's community. If you don't already have an HonestGamers account, you can sign up for one in a snap. Thank you for reading!

© 1998-2022 HonestGamers
None of the material contained within this site may be reproduced in any conceivable fashion without permission from the author(s) of said material. This site is not sponsored or endorsed by Nintendo, Sega, Sony, Microsoft, or any other such party. Doom is a registered trademark of its copyright holder. This site makes no claim to Doom, its characters, screenshots, artwork, music, or any intellectual property contained within. Opinions expressed on this site do not necessarily represent the opinion of site staff or sponsors. Staff and freelance reviews are typically written based on time spent with a retail review copy or review key for the game that is provided by its publisher.