Im going to let you in on the predicament Ive gotten myself into: I really want you to play Spec Ops: The Line. As a critic, this mindset doesnt pop up as often as you might think; we may often want to impress upon you how good or bad a game is, and well take some professional pride in how well we may be able to translate this, but its not like well personally decide to champion every title we find ourselves enjoying. Heres the real kicker: though I really want you to play this particular title, Im still not completely sure just how much I enjoyed it.

So, why is it Im so desperate to promote this game? I cant really tell you. In a perfect world, Id like you to just take my word for it, go buy this and find out for yourself. The bottom line is the more I talk about what I find so profound about The Line, the more youll see coming, and Im genuinely afraid of lessening the impact this title is likely to make to your unsuspecting mind. If you could trust me just this once, Id like you to stop reading right here and do as I say. I wont promise youll enjoy your time spent playing, but I can promise youll be interested in seeing it through to the conclusion.

However, Im not an idiot, and Im fully aware that this isnt going to happen, so Ill leap in gingerly. Spec Ops; The Line is the tale of Captain Martin Walker, and how he lost his mind. 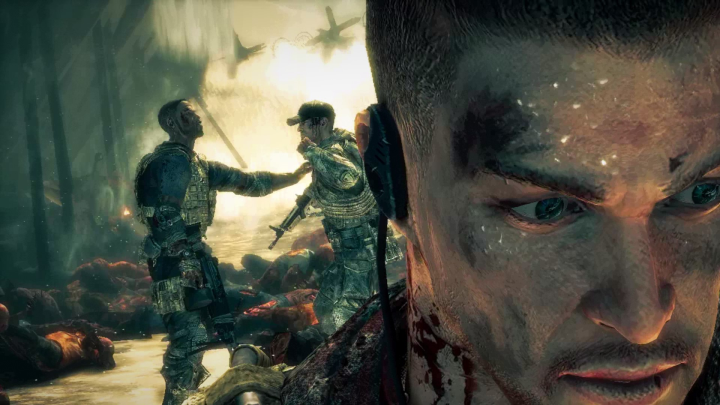 Dubai is the worlds largest and most luxurious gravesite, victim of an epic sandstorm thats effortlessly swallowed the entire city and everyone living there. Though commanded to evacuate and leave it to its fate, a battalion of American soldiers chose instead to ignore their orders, and stay put, trying to save as many lives as theyre able. Its Walkers job to lead his small recon team into the razed guts of the town and provide a report of what he finds. They walk through what used to be a road, cars buried in sand up to their windows and the corpses of their former owners rotting in the sun. Though its easy to dismiss the city as lifeless, they find what seems to be a distress beacon. Then the locals emerge from the sand; theyre armed, and youre presented with a choice; to gun down the people youre supposed to be saving, or to die.

Mechanically, The Line is best described as a mediocre Third-Person cover-based shooter. The constant gunfights you find yourself mired in often amount to finding a good place to hole up, and sniping away at the enemy ranks until theyre all dead. It possesses a surprisingly robust team command system, which can ask your platoon to focus on particular enemies, letting them do things like counter-snipe far off targets, or lob grenades into fortified gun embankments. Theyre sturdy and reliable, moving up on their own, able to pick each other up if downed, and add a solid layer of depth to whats mostly a progression of unremarkable firefights. Im not selling this game like you thought I would, am I?

The Lines battles are unremarkable, but are also completely unglamorous. Theres no witty banter thrown around the platoon, they dont swap one liners or excited chatter; theres only despair. Theres exchanges of information, grim field reports on advancing or downed foes, or panicked cries for help. Moving further into the devastated heart of Dubai invites further people to step out of the swirling sands, and most of them seem to have reason, twisted or rational, to want you and your team very dead. It doesnt always make sense, and it never really seems to matter; the people you encounter are in a very real imagining of Hell, cut off from the rest of the world by unceasing sandstorms and struggling to rationalise the desperate decisions they have had to make in order to survive.

Its hard not to feel sorry for almost every single person who points a gun at you in The Line. If you try to show mercy to even a single one, you die.

In Dubais survivors, Walker and team only initially see depraved monsters, broken by their conditions and circumstances and, in their drive to right whatever evils they see before them, dont see how easily they slip down the sandy slopes of atrocity. Decisions need to be made, often on the spot. In the games best mechanic, these are often forced upon the gamer rapid-fire. Theres no long series of discussions examining the right and wrong  theres often no right and wrong. There are decisions and consequences played out in the game proper, taking the choice out of Walkers hands, and dumping them directly onto your lap. Things wont end well, and, ultimately, youre to blame. 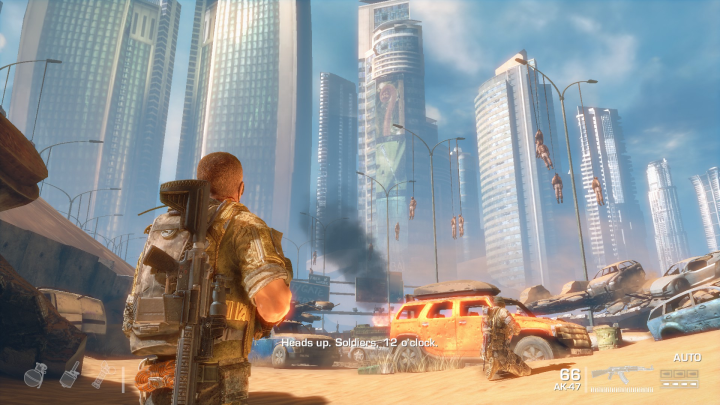 There are stories of play testers pausing the game, walking out of the room, and never returning. Or of them asking each other what the right thing to do next is. The Line never, ever simply presents a right answer. It merely has your base reactions of how to survive, and then lets you try and deal with that in your own way.

I, for one, often felt fucking awful.

Theres a part in the game, quite near the end, where I felt legitimate boiling rage at the crowds of people around me and, despite their less than defendable circumstances, gunned them all down until there was no one left to slaughter. I didnt have to; I was in no immediate threat and ammunition was low but, for that one burning moment in time, I had a compulsive need to kill every single person on that screen. Then I paused the game and spent a solid half hour dismantling what I had just done, trying to understand the people I had just killed, and how on earth a video game could prompt this kind of introspection.

Heres the thing; games often try and provoke feeling of shock and disgust from gamers in order to dehumanise the enemies were fighting against. The infamous No Russian level of Call of Duty put a sub machine gun in our hands, and asked us to mow down innocent people in an airport with the ultimate goal of shocking us at how evil your antagonists are. Theyre baddies and, because they do such awful things, its okay to enjoy killing them. The Line does the exact opposite; it humanises your enemies, makes you walk a mile in their sand-filled shoes, then makes you systematically slaughter them while you strain to justify your actions. You had no choice, right? Theyve lost their way, and youre the hero  thats how video games work. You have to do whatever it takes to move forward.

Then the lights flicker and the dead walk. Then the darkness swirls along with the sand. Then the loading screen hints, which used to tell you that crouching or taking cover with a sniper rifle increases your aim, now tells you this is all your fault.

I wish youd taken my advice at the beginning of this review, not read any of this, and just bought the game.

The Line is the Silent Hill of action titles; its more concerned at worming away behind your eyes and getting beneath your skin than it is providing a flawless gaming experience, and is all the better for it. Its a beautiful suffering and a brave decision made by the folks at Yager to build a title specifically designed to disgust you. As I said, Im not sure I enjoyed my time with their game. I dont think I was supposed to.

But I really want you to play it. Come suffer alongside me. I refuse to apologise for the hell its likely to drag you through.

If you enjoyed this Spec Ops: The Line review, you're encouraged to discuss it with the author and with other members of the site's community. If you don't already have an HonestGamers account, you can sign up for one in a snap. Thank you for reading!

© 1998 - 2022 HonestGamers
None of the material contained within this site may be reproduced in any conceivable fashion without permission from the author(s) of said material. This site is not sponsored or endorsed by Nintendo, Sega, Sony, Microsoft, or any other such party. Spec Ops: The Line is a registered trademark of its copyright holder. This site makes no claim to Spec Ops: The Line, its characters, screenshots, artwork, music, or any intellectual property contained within. Opinions expressed on this site do not necessarily represent the opinion of site staff or sponsors. Staff and freelance reviews are typically written based on time spent with a retail review copy or review key for the game that is provided by its publisher.