Let's play a drinking game. Every time you read R-Type in this review, you take a shot. Yup, I will be referencing the series a lot (you've been warned), and that makes me very happy in 2018. With Irem (R-Type's creators) out of the picture, indie developers com8com1 Software are doing God's good work. I recently reviewed Castlevania III 2.0 Bloodstained: Curse of the Moon and loved it; I can only hope that small game makers churning out awesome not-quite-remakes turns out to be a trend.

The real R-Type came along in 1987 and changed shoot-em-ups forever. It gave us the expected side-scrolling action we might have seen a few years earlier in Gradius, but it didn't throw quick bullets and lasers at us so much as crowd the screen with crawling red dots while seemingly offering no way out. But there was always a way, because we had The Force.

The indestructible sphere that sat on your nose or tail or roamed free to do its own killing is here, in this game that is partially named after it (I would assume). But it's here in the same way it was there in R-Type Leo and Pulstar. It's rigid, and far less versatile because of that. But it does have a few tricks of its own: RFA's force can split into two, three or four, depending on how powered up you are, and operate as 'bits' above and below your ship, augmenting your firepower. You can even change the direction the bits are firing in, to cover your back. It's always intriguing to see how R-Type tributes work around the unique functionality of The Force. com8com1 have done a good job here -- after all, they wouldn't want to copy too many obvious elements from their source material, would they? 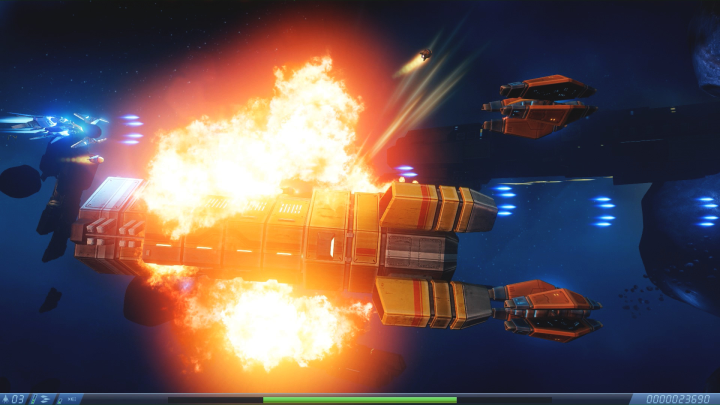 I mean, the ship you're piloting already looks like the R-9. The first boss is nearly exactly the same as R-Type III's first boss, a large spinning satellite that scales in and out of the foreground along with its huge plasma shots. The second boss is the second boss from the original R-Type, the one-eyed cabbage with patrolling snake, only flipped on its side. Your charge burst attack is lifted again, from R-Type III. Level one has not one, but two circles of gunpods to navigate through, and level two features huge mechs that drop from the sky or rise suddenly from below -- straight out of R-Type II.

If you're a shooter fan -- and you must be because you're reading this -- it won't take you long to say to yourself, wow, they lifted a ton of stuff, wholesale, from Irem's perennial shooter series.

But of course they did: that's the point. The question is, did they do a good enough job for you to walk away feeling as though you played a long lost, unofficial entry in the canon? Or does their effort come off like a bunch of hacks made a poor copy of a great thing?

Fortunately for us all, it's the former. RFA looks and sounds fantastic. In some ways it's unapologetically old school: there's no saved progress here, there are no unlimited continues. You've got three lives and three continues, as it was in the days of yore. Fight and get as far as you can before dying and retrying, and looking to push further each time out. We crash and we learn.

I found that a good approach was to play the game on Easy, and work your way through to the end, unlocking the Boss Run mode and all levels for the Arcade mode, which is essentially a level select. What's nice is that you can then play every level you've beaten (which would be all six of them at this point) and play them at any difficulty setting. Ramp it up to Hard and practice. Similarly, fire up the Boss Run and practice. Taking on RFA in this fashion will ensure that if you choose to have another go at Normal or Hard, you're unlikely to run into the frustration of failed runs -- you'll already be prepared for what's ahead. 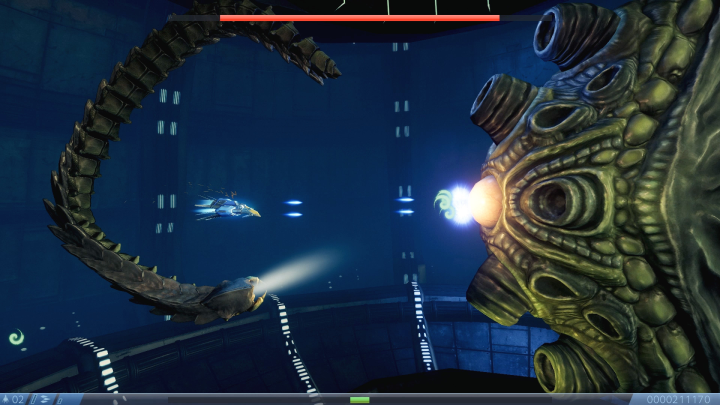 I suppose that com8com1 felt the need to give us some new generation style content, and so they have: there are between-level story sections. They're not good. My saying so isn't so much an indictment of their efforts as it is a general understanding that shooter stories are almost never compelling, and lead the player to throw up their hands and say 'why bother,' when it looks as if the developer wasted precious resources on fleshing them out. Just, no. (Thankfully, you can turn them off, which speeds up the level load time too.)

A more substantial 'advancement' of sorts to the blueprint is the way the game throws far more bullets at you than is typical of a 'thinking shooter.' A definite effort was made to create an R-Type game, only more shooter-y. The potential for increased difficulty has been mitigated somewhat by giving your ship a sword with which you can parry oncoming projectiles. The only trouble is that the parry's use drains the same energy bar at the bottom of the screen that powers your much more useful charge burst. That said, killing enemies and dragging their dispersed green life force to your craft to fill that bar is easy to do, and so players could probably comfortably use both the parry and the burst in a balanced way if they so chose.

Rigid Force Alpha is the best R-Type-esque game I've ever played. It doesn't quite feel like the sequel to the remarkably melancholy swan song that was R-Type Final, but that would have been asking too much. It's an excellent, heartfelt tribute that keeps the series alive in our hearts, even as larger studios continue to cobble the first two Irem shooters together so they can reissue the pair as a 'collection' (see: R-Type Dimensions). When you're playing, you can't help but feel like you're enjoying a new R-Type instalment -- it's an absolute thrill. However, when you're away from it, when you've already spent some time and beaten one of its modes, it will dawn on you that the game doesn't make enough of its own new, iconic moments to bring you back the way the best entries in the series do. Still, if you're a shmup fan, you owe it to yourself to play this.

If you enjoyed this Rigid Force Alpha review, you're encouraged to discuss it with the author and with other members of the site's community. If you don't already have an HonestGamers account, you can sign up for one in a snap. Thank you for reading!

© 1998 - 2022 HonestGamers
None of the material contained within this site may be reproduced in any conceivable fashion without permission from the author(s) of said material. This site is not sponsored or endorsed by Nintendo, Sega, Sony, Microsoft, or any other such party. Rigid Force Alpha is a registered trademark of its copyright holder. This site makes no claim to Rigid Force Alpha, its characters, screenshots, artwork, music, or any intellectual property contained within. Opinions expressed on this site do not necessarily represent the opinion of site staff or sponsors. Staff and freelance reviews are typically written based on time spent with a retail review copy or review key for the game that is provided by its publisher.