You are Mark West, and something mysterious has happened to your father. An evil person (or persons?) is to blame -- I think -- and you've got to find out what he's up to and hopefully find your father while you're at it. Dragonfly Chronicles' story is poorly told, employing some questionable English during its crudely illustrated cut scenes. I wouldn't bag on the game for scenes that can easily be skipped, if the game didn't want us so badly to 'enjoy them.' It's clear some amount of love and thought went into producing these intermissions, and it's a shame, because the effort did not make them good.

Anyway, as Mr. West, we set out in typical left-to-right side-scrolling fashion, punching enemies while standing, crouching or jumping, leaping up to grab onto metal rungs above us when available, scaling walls and traversing moving platforms. It's basic platformer fare that you will be very familiar with, and yet, the look of it won't at all seem familiar, because it's all played out with hand drawn images and not the 8 or 16-bit sprite work that we're accustomed to seeing represent the genre.

While the drawings might make Dragonfly Chronicles stand out from the me-too indie retro crowd, they also don't look that good, which sort of defeats the purpose. The tunes are fairly catchy, if repetitive, blaring loud and confidently in their throwback techno-cum-elevator music fashion. 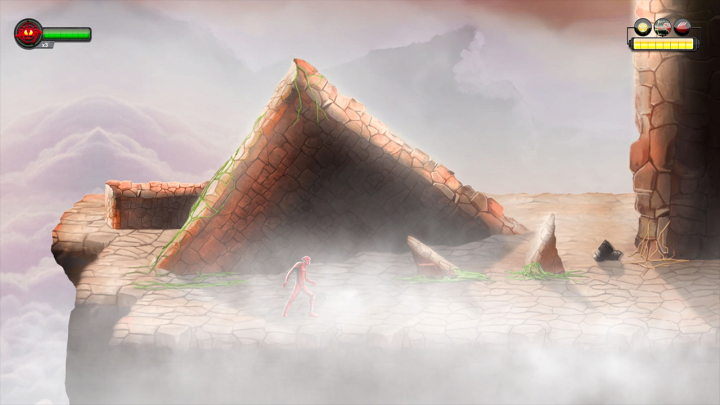 Limp presentation aside, the real trouble with Dragonfly Chronicles is that its levels are much too long. There are checkpoints yes, and they are thankfully honoured even while continuing (and you have unlimited continues), but the checkpoints are often miles and miles apart. The stages themselves trend towards being dark and garish, filled with enemies which are an odd assortment of crawling, leaping and flying monsters usually best put down by your secondary weapons.

Mid-bosses and the big bosses are large and challenging, which is good; you'll have to figure out weak points and you'll definitely want to bring a fully charged weapon bar to bear to have a chance against most of them.

Of the three secondary weapons on offer, I found the 'powered up punch' to be the most uninspiring. The wave shot is useful for taking out enemies at a distance. But it's the third choice that is most worthwhile. The yellow energy web, that coils and tangles in the midst of the enemy it hits, doing serious damage to it and all who are around. Predictably, the latter choice drains a ton of your weapon power bar compared to the others; predictably, you'll be able to replenish both your weapon and health bar through picking up items dropped by fallen foes. 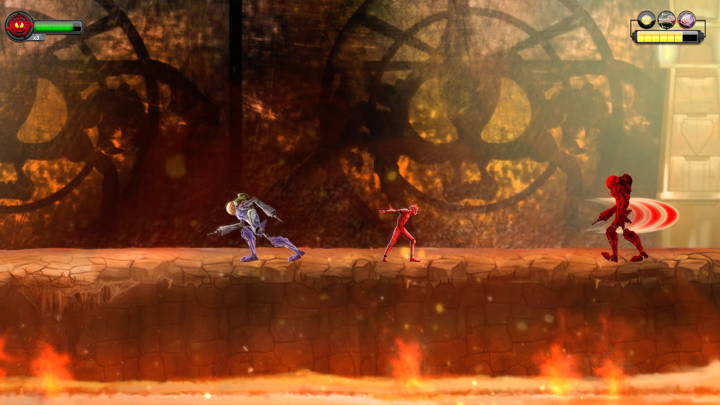 In a general sense then, the fighting in Dragonfly Chronicles is passable, but regrettably, due to some serious control issues, the platforming is not. You can't simply drop down from a wall you're clinging to, for instance. Down and release will have you bound diagonally downwards, which is a pain and altogether unnecessary. I was trying to descend a narrow chasm with beams of death crisscrossing below me. I wanted to let go and fall right down the middle of the shaft, but could only cannonball from one side towards the next and into harm's way.

Similarly, when climbing a cliff face, you can't simply achieve the summit -- you have to hope there's another cliff opposite you to bound off of, because you're never getting to the top otherwise. Basic jumps are easy to overshoot, and leaping to metal rungs or descending from them always feels like a gamble. The controls make the game much more difficult than it had to be, and challenge shouldn't be born off the back of weird and crippling input design choices and failures.

Dragonfly Chronicles is a completely forgettable venture. The controls are counter-intuitive and clunky, the music is inevitably obnoxious for all its initial fanfare, the cut scenes are weak, and the levels are long, uninteresting, unsightly and fraught with potential pitfalls that send you way, way back to try again. And you really shouldn't.
1.5/5

If you enjoyed this Dragonfly Chronicles review, you're encouraged to discuss it with the author and with other members of the site's community. If you don't already have an HonestGamers account, you can sign up for one in a snap. Thank you for reading!

© 1998-2020 HonestGamers
None of the material contained within this site may be reproduced in any conceivable fashion without permission from the author(s) of said material. This site is not sponsored or endorsed by Nintendo, Sega, Sony, Microsoft, or any other such party. Dragonfly Chronicles is a registered trademark of its copyright holder. This site makes no claim to Dragonfly Chronicles, its characters, screenshots, artwork, music, or any intellectual property contained within. Opinions expressed on this site do not necessarily represent the opinion of site staff or sponsors. Staff and freelance reviews are typically written based on time spent with a retail review copy or review key for the game that is provided by its publisher.