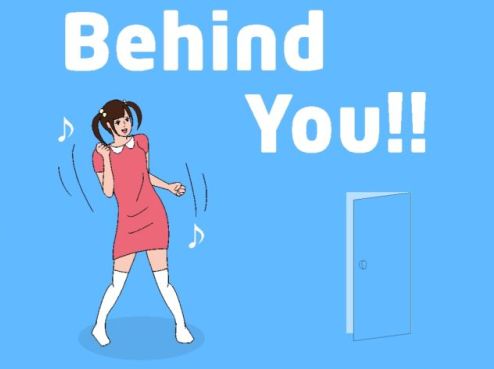 Fresh off of my playthrough of My brother ate my pudding, I decided to check out other free hap Inc apps. Behind You!! was the first one that popped up, so I decided that it would be my next brief time devourer. I anticipated more of the same kind of material from this piece that I encountered in My brother: strange humor, surreal content, a stern mother, charming presentation and an angered cat. Behind You!! featured all of that and more, and yet it managed to disappoint me. Although I didn't spend more than an hour playing the game, I ended my playthrough on a sour note, desiring more of the ingredients that made My brother a blast.

Behind You!! spoofs the rhythm genre. When you begin, you assume the role of the sister from hap Inc's games, guiding her through several solo dance sessions in her bedroom. Five musical tracks appear on the campaign screen, and fifteen remain locked. Each stage plays a cute tune, while red discs and coins descend from the top of the screen. Five circles rest at the bottom, and you must tap each coin or red disc as it passes through a circle. You get five lives per level attempt, and each miss subtracts a life.

On top of that, your mother can't stand dancing and forbids it in the household. Occasionally, you'll see a door behind you crack just a tad, which prompts you to press and hold a pause button. In doing so, your dancer either hides or engages in some other activity that doesn't enrage your mother: studying, sleeping, lifting weights, playing Twister by yourself, donning a Halloween costume... You know, the kinds of activities that quell a parent's suspicion. 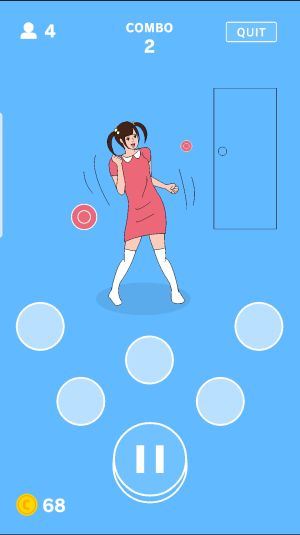 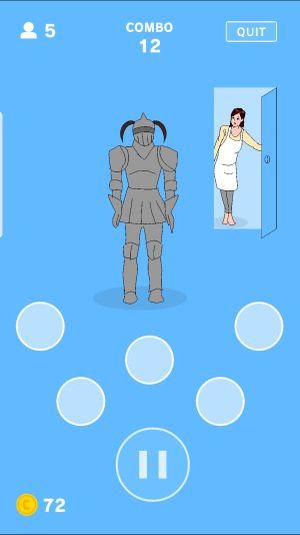 The pause button turns out to be one of Behind You!!'s greatest features. You end up playing through each song with multiple dancers so you can glimpse their comical strategies for throwing off mother. When they aren't feigning an interest in academics, they're hiding in garbage cans, grandfather clocks or old suits of armor. The sister even jumps into ninja garb and blends in with the baby blue wall. These moments of hilarity help strengthen the otherwise lifeless rhythm game hiding beneath Behind You!!'s charm.

When you complete a level, you don't automatically unlock further stages. That would be an intuitive method for advancing the campaign, but hap Inc isn't exactly known for providing intuitive content. This time, though, the studio's lack of intuition plays more to its detriment. In order to access further levels, you must collect coins while playing. You don't even need to complete a stage to accomplish this task. If you tap a coin while dancing, it's yours until you spend it. Once you have ten coins, you can play a Gacha mini-game that gives you either a new song or dancer. Although this is a rhythm game, the former item is not as pleasing to earn as the latter.

You see, Behind You!!'s mechanics are pretty drab. Most of the stages demand very little effort from you, and their rhythms are inconsistent. Rather than lively, challenging and exciting, each song is a snooze that fails to make the most of its touch screen play control. Some tracks bump along pleasantly, then slow down and feed you mere fragments of rhythm. Every piece of the soundtrack effectively feels incomplete. 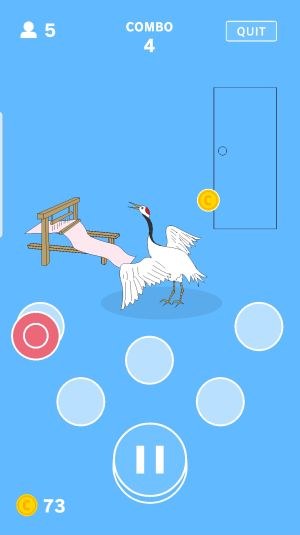 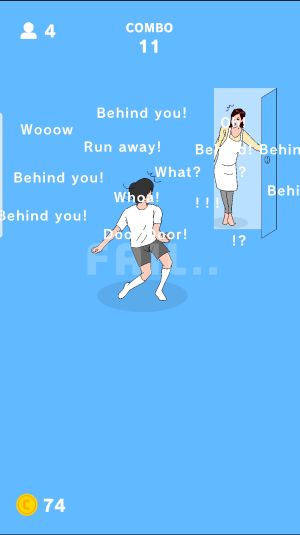 You can earn more complete versions of each track, but that requires you to achieve a perfect score. In doing so, you unlock that level's hard mode, which buries you in discs to tap. The jump in difficulty rating doesn't help the game, either. Now it overwhelms you so much that it's needlessly difficult to discern which discs to tap first. As a result, Behind You!! hard mode renders it such a frustrating app that you might consider intentionally installing a virus on your phone as an act of revenge.

Behind You!!'s characters thankfully rescue its Gacha elements. The game's cast consists of the family from other hap Inc games, as well as a flea, a snake, a ghost and a seafood lunch. The most brilliant addition to the lineup, though, lies at the bottom right of the character selection screen. You only see the words "coming soon" sitting there, as if the game is suggesting that hap Inc will provide more performers later. As it turns out, the words "coming soon" are a character. That's right; "coming soon" appears in levels, grooves to J-pop cuts and hides from mother when the need arises.

Sadly, though, none of these characters save Behind You!!. Any title that requires you to work in order to make it mediocre at best is not worth your time. Once you subtract the extra dancers, Gacha elements and funny moments, you find that Behind You!! is nothing more than a subpar musical title. Granted, you can experience most of the game's content in under an hour, but brevity doesn't excuse tiresome mechanics. If anything, you could make the case that you could've spent that time accomplishing something important or playing a more worthwhile short title. The Internet is an immense place, and you wouldn't have to search for long to find a title superior to Behind You!!.

If you enjoyed this Behind You!! review, you're encouraged to discuss it with the author and with other members of the site's community. If you don't already have an HonestGamers account, you can sign up for one in a snap. Thank you for reading!

© 1998-2022 HonestGamers
None of the material contained within this site may be reproduced in any conceivable fashion without permission from the author(s) of said material. This site is not sponsored or endorsed by Nintendo, Sega, Sony, Microsoft, or any other such party. Behind You!! is a registered trademark of its copyright holder. This site makes no claim to Behind You!!, its characters, screenshots, artwork, music, or any intellectual property contained within. Opinions expressed on this site do not necessarily represent the opinion of site staff or sponsors. Staff and freelance reviews are typically written based on time spent with a retail review copy or review key for the game that is provided by its publisher.