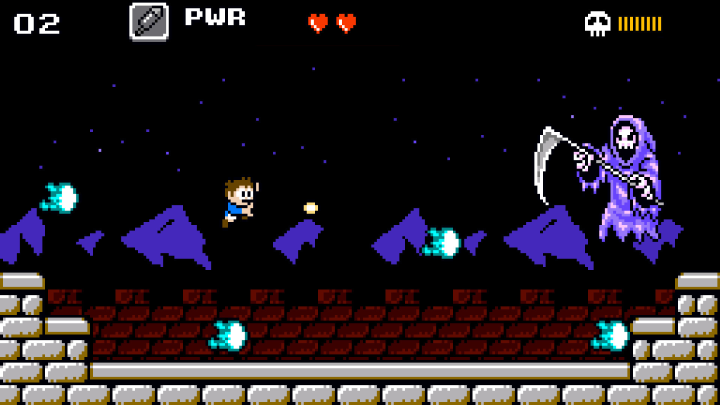 Look! Its a Mega Man clone! Is what youll say right away, upon seeing Venture Kid. And youd be right. The game is unapologetically inspired by the NES Mega Man games in look, sound and feel. That it can keep up in those areas is a credit to its two-man development team. But! Venture Kids hero cant slide. He has no charge shot. He doesnt have Rush. He cant select what order he tackles the levels in; the weapons he earns by putting bosses down dont bring strategy to the proceedings by being indispensable against the next boss on the hit list. The earned weapons are just, kind of cool, and help make your life a little easier against a handful of the peskier enemies (e.g.: the napalm against the shield guys, the rocket against the UFO guys).

Putting aside the slide, the charge, and Rush, some might say that without the thoughtfulness that goes into figuring out which path to take, which weapons trump which bosses, that the clone youre left with isnt doing its job very well, that perhaps it isnt a very good clone at all. If youre going to copy and you already have that strike against you, how can you leave out the very heart and soul of the original thing? 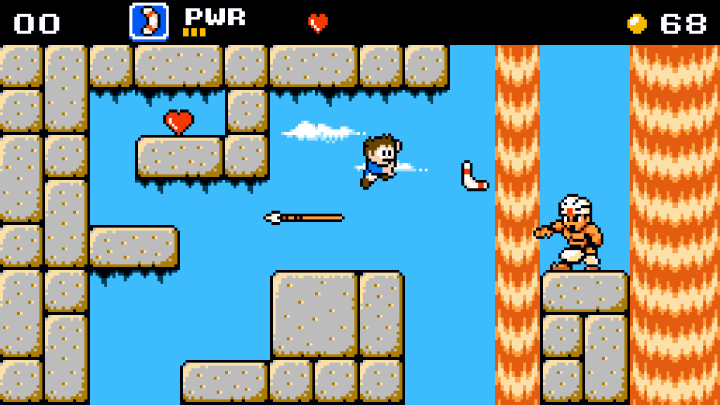 Because the boss-beating, weapon-swapping angle isnt the only great and unique thing about the Mega Man games, it turns out. It turns out that the iconic look, stirring midi melodies, and the unrelenting demand to exercise just the right timing for just the right blend of jumping and shooting can make a game play as fun and as authentically as any true entry in the canon. That Venture Kid is easier than any Mega Man game doesn't necessarily hurt it, and conversely, would probably serve to further broaden its appeal.

None of the core platformer ingredients are new or unique: theres a desert pyramid level, a mine cart level, a fire cave, an ice cave. But enemies are in the right places, platforms are narrow enough and crumble fast enough to give us a decent challenge. Bosses are especially memorable, from the motorcycle hellion who tosses movement-confounding gelatin to hold you prisoner for his murderous runs, to mine cart brothers who lob pickaxes at you in your pursuing cart even as evilly situated spikes hang in the air to really test your timing. 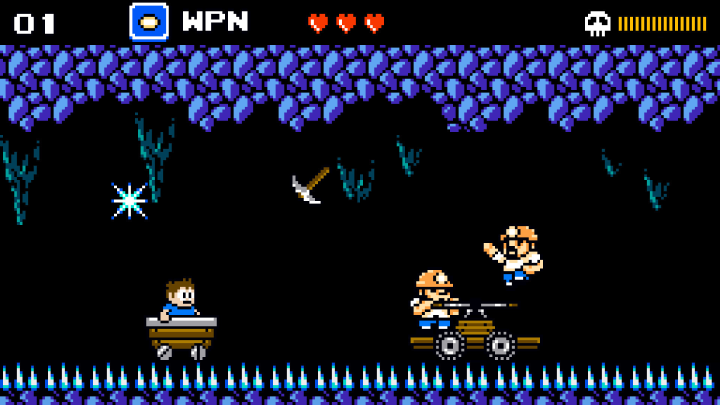 And where Venture Kid may have dispensed with some Mega Man staples, hes added a few new wrinkles of his own. Every level has a hidden path that leads to a golden artifact. Without these artifacts, you cant fight the final boss and earn the true ending. With a true old school game, thatd be that, and youd have to start over and try to get it right on your next go round. Venture Kid, though, offers file slots that save instantly, and an overhead map of sorts that allows you to repeat levels.

On the whole, the Kid isnt up against the same level of firepower that the blue bomber had to contend with, so the degree of challenge is ramped up to respectable levels by shrinking the margin of error: on Normal you can only take three hits before dying, which makes the Kid quite a bit more fragile than his helmet wearing inspiration.

And thats the story of Venture Kid, isnt it? Its a stripped down, compromise of a game. But whats left, is the beating heart of a smaller, easier Mega Man game with none of the strategy but with all of the sights and sounds, and the feel. Its like "My First Mega Man" and in the case of a series as notoriously intractable as Capcom's canon, many gamers, myself included, are happy to play it, that it exists.
4/5

If you enjoyed this Venture Kid review, you're encouraged to discuss it with the author and with other members of the site's community. If you don't already have an HonestGamers account, you can sign up for one in a snap. Thank you for reading!

© 1998-2020 HonestGamers
None of the material contained within this site may be reproduced in any conceivable fashion without permission from the author(s) of said material. This site is not sponsored or endorsed by Nintendo, Sega, Sony, Microsoft, or any other such party. Venture Kid is a registered trademark of its copyright holder. This site makes no claim to Venture Kid, its characters, screenshots, artwork, music, or any intellectual property contained within. Opinions expressed on this site do not necessarily represent the opinion of site staff or sponsors. Staff and freelance reviews are typically written based on time spent with a retail review copy or review key for the game that is provided by its publisher.