Its been 15 years since the Thugtown Massacre, and for Vinnie Cannoli, the trouble is just getting started. Set against the backdrop of World War II, Guns, Gore & Cannoli 2 sees Vinnie shooting it out on seedy streets against mob goons and crooked cops, sees him return to the quarantined disaster area that is present day Thugtown to tear apart ravenous zombies, sees him brave the very front lines to dodge-roll past anti-tank shells and rend Nazis with his chainsaw.

Vinnie takes on all comers without hesitation, armed to the teeth and armed with one-liners at once savage and corny. Youll snicker at the intentionally over-the-top voice acting and stereotypical Italian mafia movie hand-talking, relish your satisfyingly gory kills, and have an all around great time, either solo or with a friend or three. That you might not have played the original game will have exactly zero bearing on your ability to enjoy this sequel. 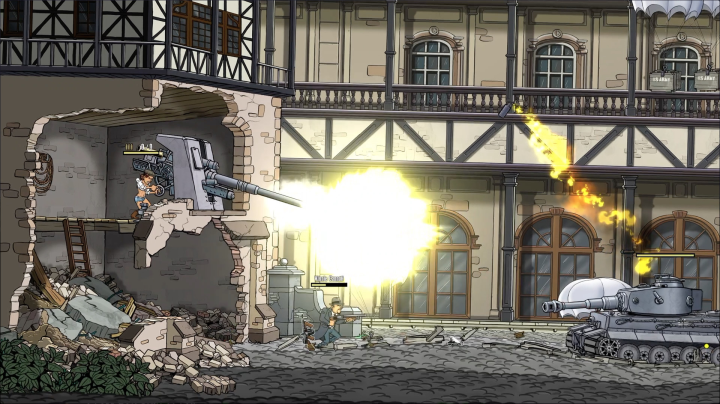 It's easy to get behind a hero who channels both prime Arnold from Predator and Al Capone, with DNA from both Mad Dog and Scorpion from Contra thrown in for good measure. Vinnie is 1980s Punisher in a trenchcoat (even Doctor Doom couldnt stop him), and his arsenal certainly helps him fit that description. Vinnie comes loaded for bear with baseball bats, Tommy Guns, flamethrowers and RPGs, all accessible from an easy-to-use weapon wheel. Shooting is a little bit trickier than you might be used to as you'll have to control your character movement with the left stick and your weapon trajectory with the right. Yes, Guns, Gore & Cannoli 2 is a side-scrolling twin stick shooter, and no I haven't come across many of those either. But it works.

Having touched upon the guns, what of the rest of the game's namesake? And while it's delicious, I'm not talking about the energy replenishing cannoli that you find as you murder your way from checkpoint to checkpoint and level to level. I'm talking about the gore. If gratuitous cartoon gore is your kind of thing, I probably had you at the title. Scores of human (and not-quite-human) bodies cleaved in twain, decapitated, scorched and tossed about lifelessly like old tire filled sacks -- it's all here. 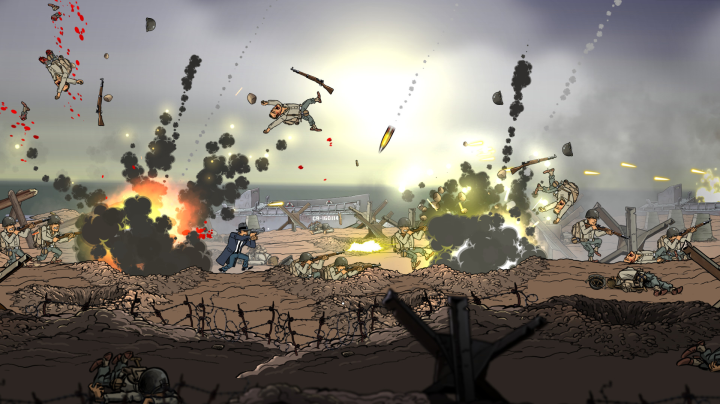 Guns, Gore & Cannoli 2 seems to be the manifestation of a drug-fueled planning session. It's as if the developers all sat around the table lit up after a keg party, and someone said, "Okay, so what if -- and I'm just spitballing here -- what if, we took a bad ass wiseguy and made him face down every manner of comic book/sci-fi/horror bad guy we can think, with no fear in his heart, just a level of swagger so preposterous that we would worry for the safety of the enemy legions. Guys?" If someone told me that it is how this game came to be, I might actually believe them, and if someone tells you that this is the best run-and-gun experience they've had in years, you might want to believe them too.

Guns, Gore & Cannoli 2's only weakness might be how repetitive it gets, which could well be unavoidable because games like Contra aren't supposed to go on for this long. Contra was done in under half an hour. Here we have over twenty levels, and checkpoints, and autosaves because it's a modern game so we expect more content. It's difficult to hold it against the game too much that it lasts too long for its own good. Your best bet is to play it in slices; you don't want a single, overly long killing session to get you down. Repetitive, murderous grind aside, and Guns, Gore & Cannoli 2 is otherwise an absolute treat. The hummable, 1940s period soundtrack, purposely funny-bad voice acting, and achievement list that actually adds to the experience, together comprise the cherry on top of what is now Vinnie's second triumphant outing and an easy recommendation.
4/5

If you enjoyed this Guns, Gore and Cannoli 2 review, you're encouraged to discuss it with the author and with other members of the site's community. If you don't already have an HonestGamers account, you can sign up for one in a snap. Thank you for reading!

© 1998-2020 HonestGamers
None of the material contained within this site may be reproduced in any conceivable fashion without permission from the author(s) of said material. This site is not sponsored or endorsed by Nintendo, Sega, Sony, Microsoft, or any other such party. Guns, Gore and Cannoli 2 is a registered trademark of its copyright holder. This site makes no claim to Guns, Gore and Cannoli 2, its characters, screenshots, artwork, music, or any intellectual property contained within. Opinions expressed on this site do not necessarily represent the opinion of site staff or sponsors. Staff and freelance reviews are typically written based on time spent with a retail review copy or review key for the game that is provided by its publisher.