I've spent most of the last few decades assuming Double Dragon on the NES was a lackluster port of a superior arcade game. Recently, with the release of Arcade Archives: Double Dragon on the Nintendo Switch, I decided to put that assumption to the test. I learned something surprising: I actually prefer the old home console version.

I haven't played a lot of the Arcade Archives titles just yet, but I really admire what Hamster is attempting with them and I'm enjoying getting my toes wet. The lineup collects classics a variety of developers produced decades ago, wraps them in an interface that gives players options to customize display settings and such, and releases them on current consoles at a price of around $7.99 a pop. There are dozens of titles already available on PlayStation 4, and the selection of games on Switch grows every couple of weeks or so.

Double Dragon begins by depicting a young lady loitering in a perfectly lovely slum. Suddenly, some thugs walk up to her and punch her and carry her away, which puts her in a pretty tough spot unless her boyfriend can save her. It's the old "damsel in distress" trope, and if that offends you, this probably isn't your sort of game. 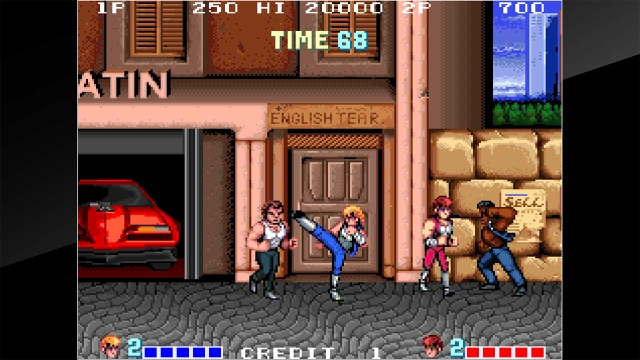 As one of the "double dragons," a pair of brothers with bulging muscles and chips on their shoulders, you'll punch, kick, and hop your way through four missions that lead you from the slums, through a construction site, to the woods to a mountaintop lair. It's the same general progression you might remember from the NES version of the game, if you played it. There are familiar elements in the backdrop, too, such as the purple-tinted mountains and some remarkable stone columns. It's easy to see the 8-bit version remixed some of the best bits.

The arcade version of Double Dragon has some issues I didn't expect, though. For starters, you can kick your way through almost anything, to the point where other options feel like an afterthought. The kick has more range than the punch and most weapons, plus it is surprisingly versatile. If you kick a thug a few times, you might also grab him by the hair and knock him around a bit more before tossing him, all without needing to press any other buttons. This maneuver does a good job of eliminating something like a quarter of your opponent's total health. Then you can keep following up and making his life miserable until finally he flashes and disappears so you can focus on other matters.

Though arcades had more horsepower than the lowly NES, it's not like the arcade version of Double Dragon threw a lot more at the player than its 8-bit counterpart. You never face more than three or four goons at a time, and they usually move sluggishly enough that you can steer clear of their attacks and focus on bringing down one target at a time. Some foes also throw knives or swing at you with whips and baseball bats, or they'll kick barrels or crates your way. You can see all of this coming, though, and there's time to avoid it. The biggest problem I had is that if I did take a hit and drop to the floor, I would stand up and start kicking, only to find that I was facing in the opposite direction of any nearby adversaries. The game always flipped me so that I was pointed the wrong way. Every. Single. Time. Since you can count on that happening, though, it's not an insurmountable issue. 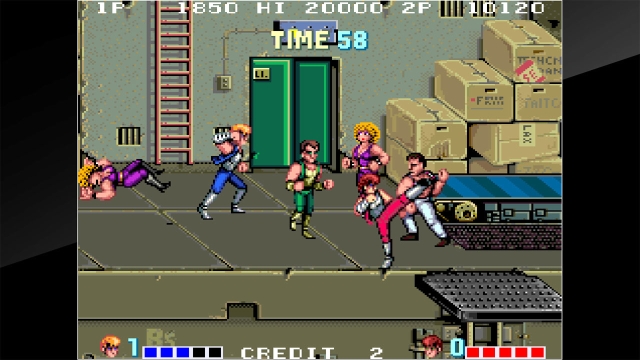 The variety of foes you face on your adventure is surprisingly limited. You have around four or five basic goons (including one who likes to throw sticks of dynamite that sit harmlessly around for a while and finally explode), and then there is Linda to represent the ladies. She carries a whip that she drops the first time you punch or kick her. Finally, there is a hulking musclebound guy who likes to pick you up and toss you into the air over his shoulder, which is annoying but doesn't actually drain much of your life meter. He returns often over the course of the campaign, sometimes with a twin and at one point with neon green skin. Oh, and there's a guy who carries a gun and brandishes it like a club or occasionally shoots at you. That's it. That's the entire rogues gallery.

As long as you steer clear of the occasional pit and don't let yourself get knocked into the water or an abyss by goons or the occasional trap, you should be able to get through the campaign without having to continue all that frequently (especially as you get some practice). And even if you do need to spam credits, it won't cost you anything; you can simply press the L button when desired to increase your available supply. 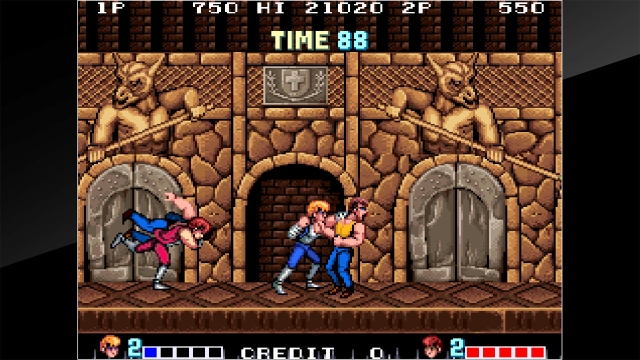 If spamming credits starts to feel cheap, there also are two other modes typical of the Arcade Archives series. First there is "Caravan Mode," which allots you 5 minutes with which to score as many points as possible and rank on a leaderboard. Then there is Hi-Score mode, which does nearly the same thing but lets you keep playing until you exhaust your initial supply of three lives. Both of these modes seem to speed up play speed, so that it's suddenly not quite so sluggish. You can't adjust any settings or even pause the action, which keeps everyone around the world playing with the same restrictions in place and ensures the posted scores actually matter. The modes represent a decent attempt to extend your experience, but even with the boosted speed, Double Dragon doesn't seem like it really benefits.

Visually, the game looks decent, with vibrant colors and expressive animations I can only assume are true to the arcade original. Characters are drawn larger than they were in the NES version, so you can make out the details to their faces and muscles more easily, and everything is zoomed in a lot closer. I would say it's too close by default, though; I had to mess with the settings in order to see all the action. Otherwise, life meters and other useful info were half removed from the screen. Since there are bars to the left and right of the play area no matter what, I don't see why the developers made it necessary to go into settings to access the whole image. But whatever; it's a relatively easy fix.

Arcade Archives: Double Dragon ports an arcade classic so you can enjoy it on your television screen, now without the modifications that were necessary at the time of the NES conversion. But it turns out those alterations made for a slightly better game, one that had more personality and what felt like a more even pace. I'm glad to have the option now to experience the original, presented approximately as the developers intended. But if I find myself in the mood to play Double Dragon again in the future, I'll likely load up the NES edition on Virtual Console, or I'll dust off my old system and cartridge and go that route. So much for assumptions...
2/5

If you enjoyed this Arcade Archives: Double Dragon review, you're encouraged to discuss it with the author and with other members of the site's community. If you don't already have an HonestGamers account, you can sign up for one in a snap. Thank you for reading!

© 1998-2021 HonestGamers
None of the material contained within this site may be reproduced in any conceivable fashion without permission from the author(s) of said material. This site is not sponsored or endorsed by Nintendo, Sega, Sony, Microsoft, or any other such party. Arcade Archives: Double Dragon is a registered trademark of its copyright holder. This site makes no claim to Arcade Archives: Double Dragon, its characters, screenshots, artwork, music, or any intellectual property contained within. Opinions expressed on this site do not necessarily represent the opinion of site staff or sponsors. Staff and freelance reviews are typically written based on time spent with a retail review copy or review key for the game that is provided by its publisher.