Costume Quest is a Halloween romp that works well enough to justify play every year when Halloween rolls around, but somehow I couldn't avoid the feeling that the team at Double Fine didn't know exactly how to bring its unique holiday vision to life. That uncertainty led to some awkward moments throughout the campaign, and some missed opportunities. The game is a simple RPG with puzzle elements, and features the quest checklists and level grinding you would expect from the genre, but with an approachable cartoon exterior that feels fresh even when it's not working quite right. 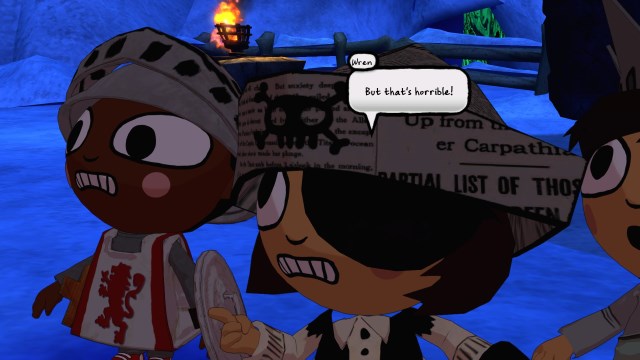 As the story goes, creatures known as the Grubbins have invaded your neighbourhood to collect all the candy. They take your sibling, believing him--or her, depending on who you choose to assume the lead--to be an extra large bit of candy. Theyre clearly not very bright, but their ineptitude fits the narrative style. Adults are rooted in their ways and inflexible, whereas the heroic kids are dynamic, unpredictable and quite organized. Its a little jarring at first, but then so is the Burton-esque aesthetic and that should grew on people. Mostly.

Combat is initiated whenever you run into a foe whilst roaming the locale in search of your next objective, or when you knock on a door and are greeted by a baddie. The foes you face are very much villains in the Saturday morning cartoon sense: gullible, goofy and too silly for anyone to possibly take them seriously. Its too bad the attempts at clever writing don't quite hit the mark. I believe I chuckled just once, but the line wasnt exactly worth dedicating to memory and so I can't quote it now. 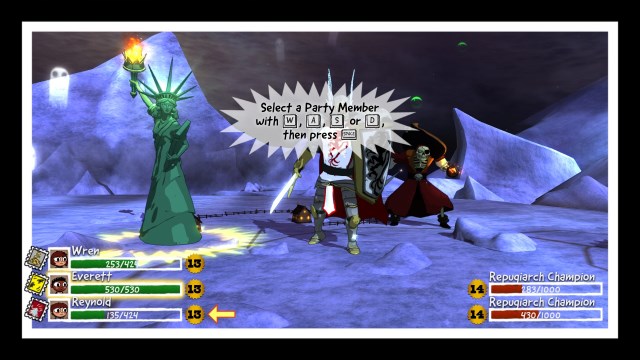 As combat commences, you're taken to a separate field where your heroes and the enemy units for some reason become giants. Why the costumes become physical manifestations of their paper and cardboard imitations is never satisfactorily explained, but its pretty cool, so I guess thats okay. Whats worrisome is how combat takes place. You have a basic attack such as a rocket fist, energy sword, or fireball (depending upon the chosen costume). Then theres a special attack that charges up over the course of three turns and makes use of a thematically appropriate ability. The robot fires a barrage of missiles, the knight creates a blue shimmering shield that blocks damage for a teammate of your choosing and the Statue of Liberty heals the entire party.

Lady Liberty is the game's dedicated healer, which is a problem because Double Fine didnt provide any other type of "priest" class costume to accompany her. I know kids dont often dress up as nurses these days, but certainly a fairy could have evened things out a little and provided some unique healing abilities, such as gradual health regeneration. You see, Costume Quest eschews the use of items of any kind. You have to be creative in avoiding damage and become very proficient at the timed hits system. 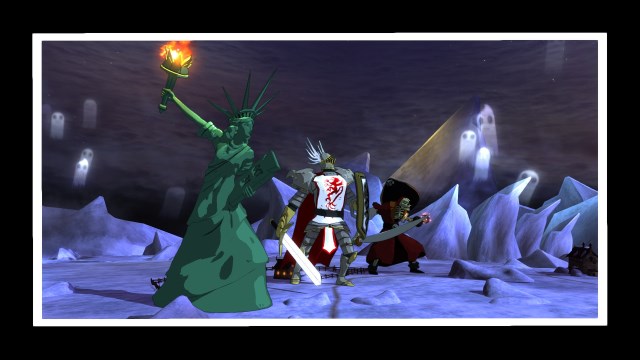 Timed hits are a mechanic introduced to the medium by the likes of Super Mario RPG and popularized in subsequent games such as Legend of Dragoon, which overused it to a painful extreme. When you choose a basic attack, you specify the target and then you are shown a prompt as your character enters a slow-motion phase, waiting for you to press the right key. This will be either Q, E, Shift or Space, and if you press it successfully, your character does roughly thirty percent more damage... or takes as much as twice the usual damage, when defending.

Since you level infrequently, enemies are always stronger than you are. And since there are no random battles in Costume Quest, you cant grind for experience in order to create an advantage derived from superior stats. Battles can be lost in the blink of an eye if you flub your button cues, though Double Fine softens the blow by allowing you to respawn close to the point of defeat so you can immediately retry. I dont think the goal was to undermine save points, but that's the net effect. The system leaves you with no alternative but to keep trying in the hopes you can eke out a win, even though the balance isnt in your favour. 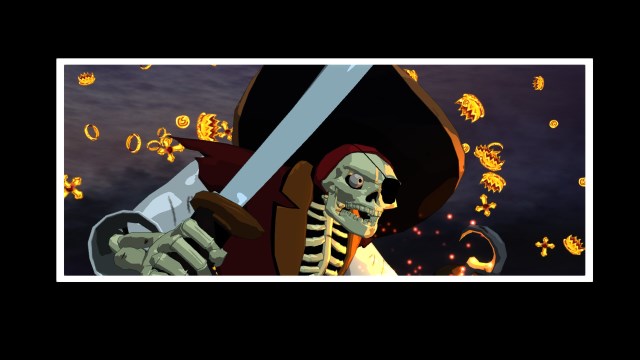 Speaking of balance, you can buy stamps that award you highly valuable passive abilities and attack options. I would suggest investing in them as soon and as regularly as you can. Damage over time and splash damage stamps are particularly useful and can easily turn the tide of battle, especially late in the game. In fact, by the time you have completed the first episode, youll want to collect the rest of the stamps available in the downloadable content, Grubbins on Ice (which is helpfully included with purchase). I'm unsure how you might manage to beat the annoying final boss without those passive buffs in place, which I consider a definite mark against the game.

Another point worth mentioning is the card collection mechanic. When most everything is incentivized and micromanaged, it's a nice change of pace to be able to enjoy some stress-free Halloween humour. The cards have some amusing names and horror candy artwork, including the likes of Carp Cod and others. You won't have to exert much effort to collect them all. Sometimes that process is repetitive, but I didn't find it excessively annoying. It just stretches on a bit long when coupled with the hide-and-seek quests you'll find in each area, which is unfortunate.

One thing that might have helped the game is a greater variety of costumes to unearth, ideally including others as useful as the Lady Liberty and Knight ones. You can choose among the suits you've gathered to suit your combat style, for the most part, but there aren't enough genuinely useful abilities to justify a prolonged search for additional suits. It also doesn't help that navigation is so awkward; though the game is a port of an earlier console release, the game failed to detect my Xbox One controller at all. I found that a little strange. 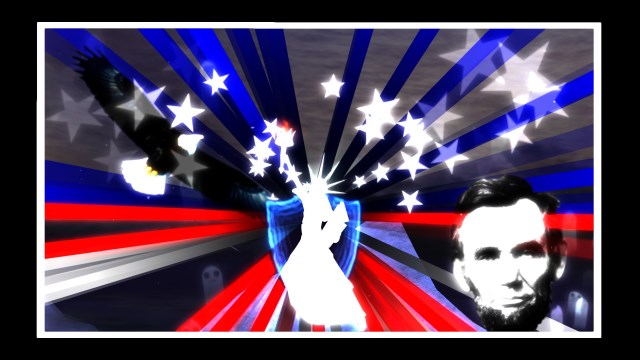 Costume Quest features raw personality that shines through its imperfections, and a fully orchestrated soundtrack that suggests Double Fine put a lot of hard work into the game. Audio changes on demand, shifting from shopping mall jingles to ominous aural landscapes to lighthearted mischief. The art design doesn't exactly suit my tastes, but at least it is aging well. I recommend buying this game even at full price, since you might well enjoy revisiting it each time the appropriate holiday season comes around...
3/5

If you enjoyed this Costume Quest review, you're encouraged to discuss it with the author and with other members of the site's community. If you don't already have an HonestGamers account, you can sign up for one in a snap. Thank you for reading!

© 1998-2020 HonestGamers
None of the material contained within this site may be reproduced in any conceivable fashion without permission from the author(s) of said material. This site is not sponsored or endorsed by Nintendo, Sega, Sony, Microsoft, or any other such party. Costume Quest is a registered trademark of its copyright holder. This site makes no claim to Costume Quest, its characters, screenshots, artwork, music, or any intellectual property contained within. Opinions expressed on this site do not necessarily represent the opinion of site staff or sponsors. Staff and freelance reviews are typically written based on time spent with a retail review copy or review key for the game that is provided by its publisher.