Apparently somebody watched Song of the Sea, sat down for a good long think, then said you know what would be great a sidescrolling horror rpg that looks like THAT.

Turns out, that was actually a good idea.

Oxenfree is one of the more weird and unique games Ive played in recent memory, and moreover one of the best horror games Ive yet had the pleasure of playing. Set apart from its peers by a constant stream of really smart technical and narrative decisions found lacking in other games of its ilk. Like similar narrative-focused titles, a strong story and great characters form the beating heart of the game, around which a small, but well-developed handful of simple gameplay mechanics all work together to make the strange beast of Oxenfree a lean and effective experience.

For its part, the story presented in the game is a neatly packaged mystery that unravels at a steady and logical pace throughout, and wisely avoids any kamikaze plot twists, providing a constant hook that really helps the gameplay and horror elements shine. 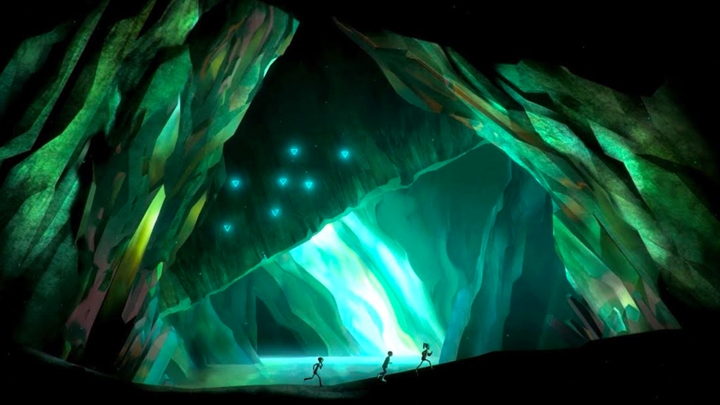 Like the story and the game overall, the characters and their dialogue are at once memorable and carefully constructed, but also without any unnecessary fluff around them; the teen cast all feel believable, with some fantastic dialogue between them, ranging from immature sniggering to awkward truth-or-dare confessions to horrified gasping, all delivered with pitch perfect voice acting.

And of course, theres that gorgeous artstyle running throughout the whole thing.

However, all that above would be effectively null and void, if the gameplay itself wasnt up to scratch, and thats where the smart decisions I was on about earlier come into play. Gameplay in Oxenfree falls into three distinct categories - exploring, making tough choices, and interacting with the world by way of your radio. What makes these interesting, however, is their implementation; wandering around the island not only serves to get you from one point to another, but also allows for character interaction and progression, owing to the fact that Oxenfree never has you going somewhere alone. Which handily links into the difficult decisions you have to make throughout the game, as these kind of things can regularly pop up whilst you explore.

The radio also ties in with the other mechanics as your primary way of interacting with the world around you, but also allows you to pick up any radio signals floating round the island, from jazz stations to cryptic numbers broadcasts to snippets of the history of the island. In practice, this means that you will rarely find any of these three core gameplay mechanics in a vacuum, which makes actually interacting with Oxenfree a delight once it really gets going. 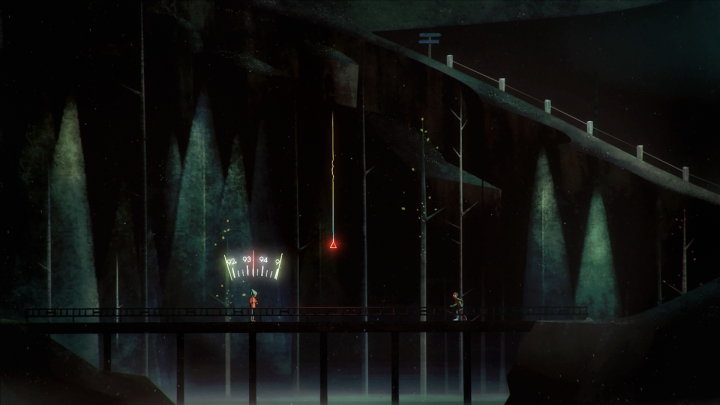 Moreover, the implementation of meaningful choices and branching stories also doubles up as the games main objective - and by extension, point of failure. In a smart move on the developers part, there is no point where you can die (though pain and misfortune can easily befall the player) thus preventing the frustrating gameplay loop found in many horror titles which often slows progress to a crawl and lessens the experience in some cases.

Instead, your punishment for failure is the disapproval and alienation from your peers, which can mount throughout the game, or be averted through careful interaction with the other characters and the various spookies that haunt the island. Finally, the focus on character development throughout the whole experience is well-realised and quite refreshing, amongst so many horror titles pitting a lone character against a veritable house of horrors. Its not that I dislike those sort of titles (in actuality, I love such games, when done right) but having a whole party of distinct characters that you speak with throughout the game makes for a fairly unique feeling throughout, which helps lift Oxenfree from the realms of a merely good game into a truly great horror experience, just so long as youre content with a shorter experience if you dont like replaying games too much.

In summary, Oxenfree is a good horror game on its own, leaning far more on the creepy and sinister end of the genre than the more visceral kind that some may prefer, but the interesting ideas and offbeat presentation, coupled with rock-solid and tidy gameplay makes for an oddball masterpiece, which is sure to please anybody willing to take a gamble on such a title.
4/5

If you enjoyed this Oxenfree review, you're encouraged to discuss it with the author and with other members of the site's community. If you don't already have an HonestGamers account, you can sign up for one in a snap. Thank you for reading!

© 1998-2020 HonestGamers
None of the material contained within this site may be reproduced in any conceivable fashion without permission from the author(s) of said material. This site is not sponsored or endorsed by Nintendo, Sega, Sony, Microsoft, or any other such party. Oxenfree is a registered trademark of its copyright holder. This site makes no claim to Oxenfree, its characters, screenshots, artwork, music, or any intellectual property contained within. Opinions expressed on this site do not necessarily represent the opinion of site staff or sponsors. Staff and freelance reviews are typically written based on time spent with a retail review copy or review key for the game that is provided by its publisher.