God bless "Blade Runner 2049." Some might describe it as a startling look at a dystopian future, but in many ways, its one of the most optimistic imaginings ever. When its equally expectant founding film decided to give birth to the prominence of product placement, it lit the skyline with neon advertisements for then market leaders who would fall apart in the years following. While PanAm, Bell and Cuisinart will never make the 2019 watermark set out for them, Atari might still just limp over that line. But that wasnt enough for "Blade Runner 2049," which provided a longing slow pan shot of Ataris triple-peaked logo adorning the glowing billboards of tomorrow. Theyre nothing if not slaves to continuity.

Im not entirely confident theyll reach that extended landmark. A new subsidy seems to fall into bankruptcy every year, and the new Ataribox re-entry into the console market that was announced a few months back has real sink-or-swim potential based on how thick consumers' nostalgia goggles are at the time of its eventual release. But, if the brand is to find a saving grace, its probably going to come from hardware, considering how diligently Atari has worked to piss away any goodwill it spent decades building with software. Those in charge only have themselves to blame, after releasing blatantly unfinished builds of any big licenses obtained (Enter the Matrix) and destroying the credibility of their own big IPs (Driv3r).

And then there was Alone in the Dark.

Alone in the Dark is a long-running cult favourite that only falls under Ataris umbrella because the original developer, Infogrames, are one of the many companies that have purchased the flailing Atari brand over the years. Still, to offer some faint credit, some genuine effort has been put into rebooting the coeval horror series several times. The New Nightmare tried to piggyback off the Resident Evil hype train back in the 32-bit era while, only a couple of generations ago, a proper reboot of the entire franchise was attempted and quietly failed. Both these games are not great--theyre barely even good--but theyre both bloody world-beaters when compared to Illumination, Ataris definitive statement that it has thrown in the towel. 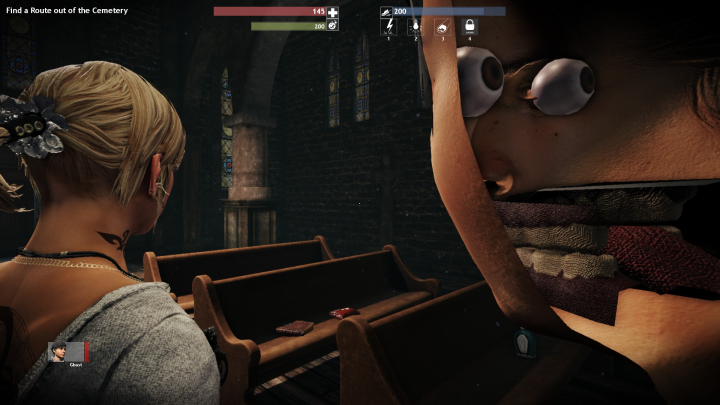 Fobbing the title off to an inexperienced first-time developer (who, tellingly, "boast" Illumination as their only release thus far) was a bad idea in and of itself. Turning whats always been a creeping survival horror affair into a limping, clumsy attempt at Left 4 Dead: Me Too piled on the pain. But, hey, lets give fledgling developers Pure FPS some credit. I mean, sure, they picked that name for themselves and then made their only release a third-person shooter, but theyve also adhered to modern-day Ataris strictest of conditions: ensure you release your game in a considerably unfinished state.

Illumination is bad. Theres no getting away from this fact. Whatever straggling player base the game currently has left, swirling around at the bottom of the servers, has long since embraced the awful, considering Illumination the The Room of co-op horror. Its not underserved; its a spectacular failure on every conceivable level. I genuinely dont know where to start.

Okay. Lets try this. Illumination says it wants to take cues from its Lovecraft-inspired founding title, but doesnt. At all. The closest it gets is when it briefly mentions some of that games plot points and characters during the uninspired and sometimes misspelt walls of text that precede any of the levels. Such moments are woefully offered as Illuminations only attempt at storytelling. Instead, the game has a go at being the bargain bin bastardisation of Left 4 Dead and Alan Wake, wherein you and up to three other friends (why would you do this to people you like?) glitch through walls and learn to hate life. Visiting an abandoned mining town for four unique reasons that barely register as more striking than just because, your goal is to reach a safe zone by traipsing through an army of indifferent monstrosities and light puzzles. Upon completion, the environment resets to something else, and you do it all again. 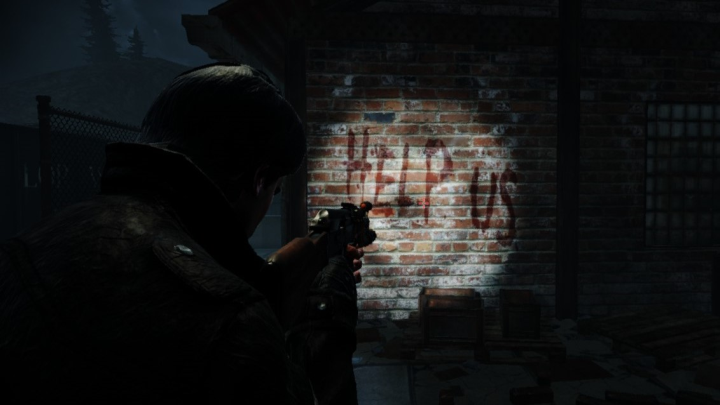 The hook is that each stage is filled with constantly respawning monsters... which certainly kneecaps the Alone part of the games title. But thats alright; the only way you can hurt them is to infect them with light, deftly making the Dark part equally obsolete. I guess in the: Illumination isnt much of a name, but its not much of a game, either. There are several ways you can pelt the monsters with enough light to damage them with your weaponry. You can set them on fire, or repair lamps and force them into beams. You can summon magical shafts of exploding sunlight, or just shine a handheld torch at them. Or, you know, dont. A lot of the time I just casually jogged past them on my way from annoying fetch quest objective to annoying fetch quest object as they shuffled after me, growling in annoyance. This doesnt fly for all the demons (some are faster than you, and some have projectiles), but it remains a more viable tactic then it should be.

Its hard to keep my complaints in order, because every issue explored in Illumination attaches itself to a dozen more. The fetch quest puzzles are rage bait, consisting of nothing more than "find item A and place it in plot device B." But each character can only carry one item at a time, artificially bloating the amount of in-game time smaller parties must suffer as they futilely crisscross uninspired stages, constantly fighting equally futile battles against demons that just bloody respawn anyway. Good luck and God bless if you try to do this on the single-player mode; while Left 4 Dead gave you AI-controlled buddies to take some of the strain, Illumination just drops you in the same stages that youd play in co-op, but asks you to do it on your own. At least you can tell yourself no one else will have to suffer.

My key to single player success was to develop a conga line of monsters and lead them on a merry dance until the cap limit was reached. Illumination isnt shy about offering you a helping hand in this endeavour; sometimes spawning monsters will drop into a bit of wall or a nearby mound where theyll stick, pitifully swiping at you from afar. Spawning has no real logic to it, meaning new enemies will appear, literally, right in front of you from time to time. This could be considered dangerous if it wasnt for the stumbling stupidity of the AI beasties, wholl often act more surprised than you at popping into existence inches from your face. 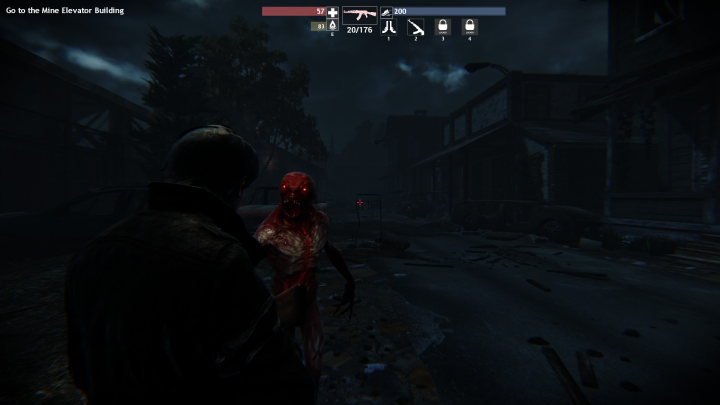 I could go on; theres nothing Illumination does right. Its an almost perfect cavalcade of bad game design, inept program and a complete absence of ambition. But, if I had to pick its most glaring fault its that it so desperately wants to be a horror game, but exhibits absolutely no understanding of how horror should work. Its a bland, backwards bludgeoning attempt at producing scares, throwing a nonstop parade of faintly glowing monsters at a player asked to complete boring chores and thinking thats enough. The ever-present respawning monsters mean that Illumination never takes the time to build dread or cultivate anticipation. You never have the chance to worry about the inevitable rush of demons because youre always, always in the midst of the inevitable rush of demons. Its exhausting rather than exhilarating, frustrating rather than frightening. Its endless, ham-fisted drudgery dedicated to completely missing the entire sodding point.

It would be kinder if Ataris legacy ended with that lovingly recreated advertisement from "Blade Runner 2049," to allow people the fantasy of its continuing relevance. But even if Atari didnt deserve that kindness, Alone in the Dark certainly did. Before all this mess, before someone decided to prostitute the franchise out for that last, shameful trickle of money, before the travesty that was the decision to let Uwe Boll make films based on the license that had sod all to do with the license, and before this abortion of a game, it once had significance. It had a place in history, and in a lot of peoples hearts. It had done things other brands wouldnt believe, popularised the survival horror genre and made it suitable for the mainstream. It had seen Lovecraftian horrors slither from the darkness in Victorian manor houses. But now, at the depths of its downward spiral, all these moments have been lost in time. Like tears in rain.

If you enjoyed this Alone in the Dark: Illumination review, you're encouraged to discuss it with the author and with other members of the site's community. If you don't already have an HonestGamers account, you can sign up for one in a snap. Thank you for reading!

© 1998-2020 HonestGamers
None of the material contained within this site may be reproduced in any conceivable fashion without permission from the author(s) of said material. This site is not sponsored or endorsed by Nintendo, Sega, Sony, Microsoft, or any other such party. Alone in the Dark: Illumination is a registered trademark of its copyright holder. This site makes no claim to Alone in the Dark: Illumination, its characters, screenshots, artwork, music, or any intellectual property contained within. Opinions expressed on this site do not necessarily represent the opinion of site staff or sponsors. Staff and freelance reviews are typically written based on time spent with a retail review copy or review key for the game that is provided by its publisher.