How many flaws am I willing to excuse as I work to complete a puzzle? Games shouldn't prompt players to ask such questions, but the inconsistent collision detection and inadequately tested environments you encounter in Hob may have you doing precisely that. Those unfortunate issues mar what is otherwise a beautifully realized adventure featuring thought-provoking art and design.

Hob follows the long tradition of numerous Zelda titles before it by depositing you on a map with no more explanation than whatever you can gather from the world in which the protagonist (ergo, you) exists. You are encouraged immediately to venture forth and solve the worlds problems. Then interesting things happen and you find yourself armed with a "glove" that grants you access to all sorts of buttons, levers and switches otherwise reserved for the Asian-steampunk robot that is your constant companion. The glove is both a tool and a weapon, as is the sword you acquire shortly afterward. 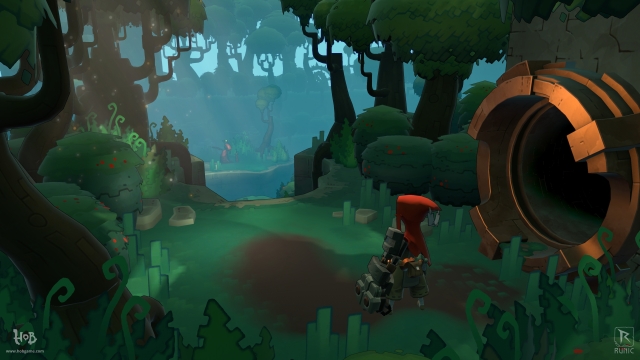 Using the glove, you can break sections of wall and stun enemies in combat, whereas the sword works every bit as well as a key as it does an implement for cleaving enemies. You can upgrade each tool by finding a selection of blueprints and items that enemies drop. Like the minimalist interface, the short list of gear has the benefit of allowing you to concentrate fully on the puzzles at hand. At its heart, Hob is an adventure all about solving puzzles.

The sheer scale of the puzzles you encounter allows Hob to stand apart from its genre peers. As you play, it becomes clear our hero is an engineer; his familiarity with the equipment and its workings tell as clear a story as do the environmental clues. Runic has posted the official narrative on the Hob Steam discussions page for those who wish to read it (an odd choice, to be sure), but environmental storytelling is a high point of the experience and you're better off piecing everything together for yourself. The world invites imagination and wanderlust, and that's good because this draws attention to the game's selling point: the extent to which your actions impact the main character's surroundings. 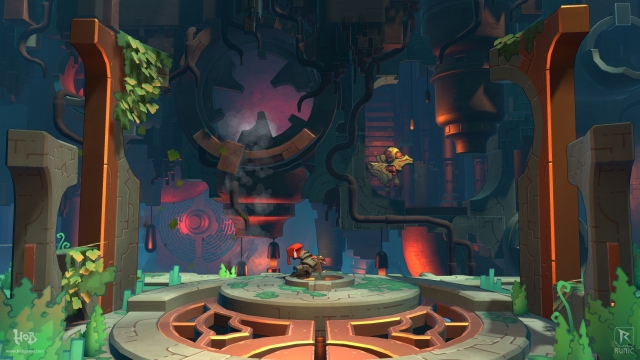 The technical execution leaves something to be desired, though, and that something is good collision detection. Everything from ledge navigation to weapon attacks left me wondering if I was missing something or, perhaps, something was missing me. Hob is what I would call undercooked. More time should have been spent testing it, instead of leaving that task to players. As you adventure, you're sometimes left to wonder if you failed for unknown reasons, or if the game is somehow broken. Failure should be definitely your fault, so you can feel as if you are truly in control, but that's not always the case here.

Hob features a mostly fixed perspective that hangs somewhere over the treetops, and when the hero is obscured--by a tower of stone, for instance--a checkered transparency effect lets you monitor his movements. This approach works most of the time, except during combat. I had to quickly navigate my way to an open field with no obstructions to effectively deal with mobs on a few occasions. This is the natural drawback of a world that renders everything as far as the camera can see. Any obstructions are nothing more than a minor annoyance, at least. 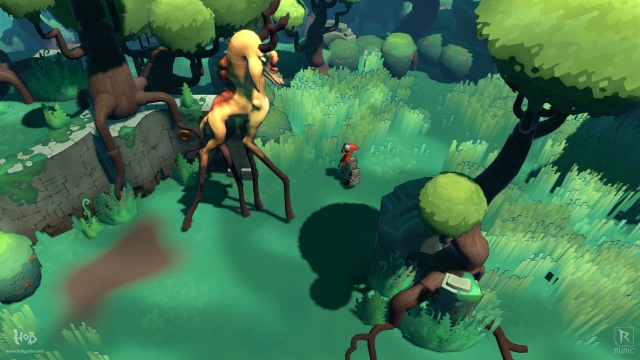 Runic is content to let you get lost until you find the switches and buttons that make all the pieces lock together. With so little in the way of signposting available, however, you might spend a significant period of time retracing your steps as you try to find the ledge or point of interaction you missed on one end of the map or the other. Your robotic companion has given you virtually all the help he deems necessary, and he doesn't assist you further except by offering occasional grunts and map markers at a couple of junctures. Personally, I prefer that relaxed attitude toward exploration; the world is gorgeous and I never grew weary of searching for the next path forward.

Overall, pacing is smooth and fits the general design quite well. The difficulty curve was clearly managed by an experienced team, and I found no cause for frustration despite my numerous deaths. Re-spawn points are placed within close proximity of high-failure choke points, so that youre not forced to retread much familiar ground in order to try again. There is the occasional awkward camera angle in closed corridors and small rooms, but Runic wisely mitigated most potential navigation issues by not abruptly changing the direction any analog input moves you just because the perspective changes. During such moments, you remain fully in control. 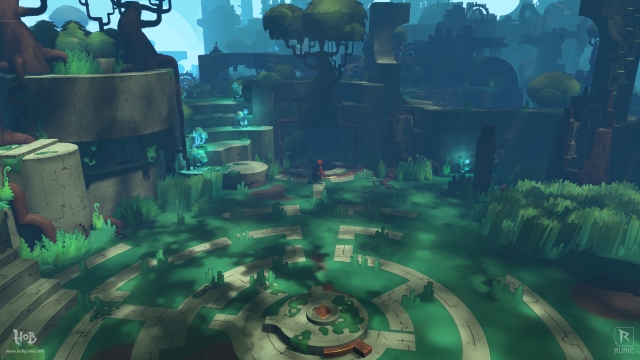 Sound effects in Hob are a treat for the ears. The strong ambient atmosphere, however, is at odds with a strangely sparse and repetitive soundtrack. There is some variety, but the music fades in when least expected and compositions seem to run too long to suit short treks across the landscape. In combat, the drum-heavy backing track is overwhelmed by sound effects and does nothing to increase the tension. In short, the soundtrack doesn't suit the epic scale required by the world and its characters.

Hob has a casual feel that sometimes leaves the impression there was no difficulty setting at all, even though load screens suggested I could make adjustments if combat became too much to handle. Players who follow that advice may deprive themselves of something worthwhile, however. If anything, the sight of an enemy boasting as it stood over my corpse increased my determination, while also speaking volumes about the degree of work the developers put into character expressiveness. It always amused me to see the hero drop face-first from one of the re-spawn/save points, and I also appreciated the other lovingly crafted animations and the personality they added to the overall experience. 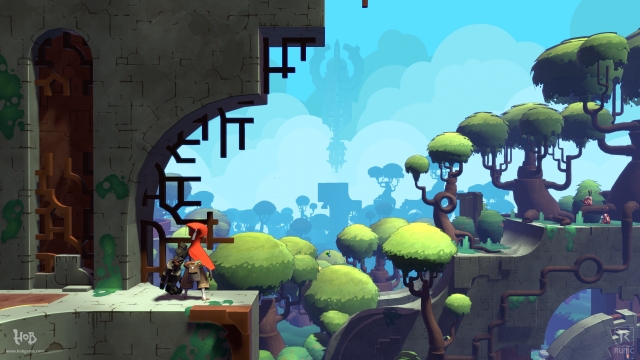 I do love a game that uses holistic clues to communicate, and Hob excels in this respect by treating the player like an individual who has a functional brain capable of discerning hints and clues. If you make the mistake of assuming the heros shoulder roll and chip damage are all you need, youre in for a rude awakening. Hob is a glass cannon, and recklessness will send you back to the nearest re-spawn point in a hurry.

Though you can likely beat Hob within twenty hours (I did a fair bit of backtracking that extended my own session beyond that), it looks like the best ending may be reserved for those players who collect every upgrade and item, and solve all of the maps available puzzles. Im not sure the imperfect collision detection will make that project entirely convenient for me, but I do know I want to see if my suspicions are correct... even if I have to spend another five hours in the game's beautiful world to find out for certain.

If you enjoyed this Hob review, you're encouraged to discuss it with the author and with other members of the site's community. If you don't already have an HonestGamers account, you can sign up for one in a snap. Thank you for reading!

© 1998-2022 HonestGamers
None of the material contained within this site may be reproduced in any conceivable fashion without permission from the author(s) of said material. This site is not sponsored or endorsed by Nintendo, Sega, Sony, Microsoft, or any other such party. Hob is a registered trademark of its copyright holder. This site makes no claim to Hob, its characters, screenshots, artwork, music, or any intellectual property contained within. Opinions expressed on this site do not necessarily represent the opinion of site staff or sponsors. Staff and freelance reviews are typically written based on time spent with a retail review copy or review key for the game that is provided by its publisher.