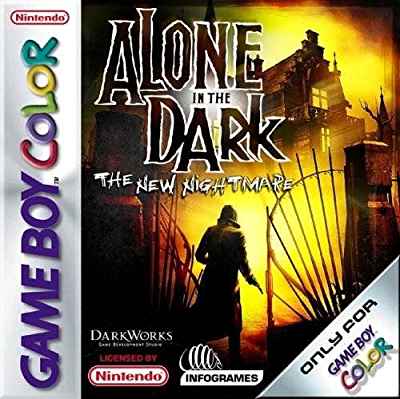 No, this is not an image from a Something Awful Photoshop contest. Be afraid. Be very afraid.

I didn't think the Alone in the Dark franchise could get any worse than its third installment. I was dead wrong. In 2001, developer Pocket Studios produced a pint-sized version Alone in the Dark: The New Nightmare for Game Boy Color. Let those horrifying ramifications sink in for a minute. Imagine Carnby shining his flashlight on a demonic dog. The flesh-eating pooch charges down a dusty, pre-rendered hallway and leaps at our hero. Meanwhile, Carnby plugs a few bullets into it. Now, replace the polygonal character models in your mental image with splotches of pixels, reduce the color palette to 32,000-ish, and imagine the scene as if it were painted by a four-year-old. That's just the tip of the iceberg...

I will admit that at times, New Nightmare's visuals don't look horrible. For instance, the forest path you enter at the beginning of your quest appears spooky and is decently rendered. However, once you enter the mansion, the hideousness begins. Doors, decor and lavish touches like columns and libraries lie underneath piles of pixels. You'll encounter hallways and rooms found in the console edition, here reduced to grainy pictures and lacking any sense of atmosphere or tension. The house's creepy vibe vanishes steadily with each chamber you access, as each location brings another mess of earthy tones and drab colors. 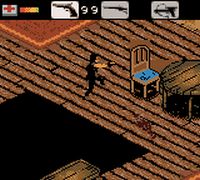 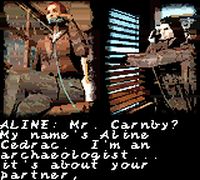 Monsters no longer stalk the premises as they once did. Instead, they spawn during random encounters. Now and then, Carnby warns you to be careful as the game segues into an isometric shooter mode. Ammo litters the area and turd-like creatures creep out of dark corners of the battlefield. If you pause the game and squint your eyes just right, they kind of resemble dogs. With some rudimentary aiming and button mashing, those beasts fall with little effort.

Combat difficulty doesn't step up much until you fight Richard Morton. Then you realize that Carnby's movements are too sluggish, which prevents him from being able to put a fair distance between himself and his nemesis. Unfortunately, even when you manage to create a sizable gap, Morton still deals considerable damage. Earlier in the campaign, the ghost of character named Fiske recommends using the shotgun to vanquish the forces of darkness, particularly Morton. However, even at close range, the shotgun dishes out negligible damage, and its shot rate is far below that of your pistol. You might wonder why the developers even bothered including this weapon in the first place.

New Nightmare's portable campaign isn't particularly exciting, either. You venture through limited pathways that sport few nooks and crannies to search, and the items you might locate within them are mostly unhelpful. You most often snag ammo, which doesn't matter since you can procure it when battling enemies, anyway. Worse than that, you typically locate a clip or box of shells next to a forced encounter, and thus potentially waste more bullets than you gain. To further exacerbate the issue, you occasionally come across dead ends and empty spaces with preset altercations. In other words, New Nightmare punishes you for exploration and rewards those who stick to a tight, stringent rail when advancing. 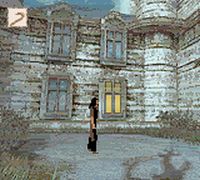 Of course, if you happen upon an undesirable route, you can save or load at any time. However, save scumming further demeans New Nightmare's scare factor. Granted, the original Alone in the Dark installments featured such file management, but they made up for it by showcasing challenges that relied on more than stumbling upon event items and button mashing.

Thankfully, drifting around Shadow Island is reasonably smooth and streamlined, whatever its other issues. This version of New Nightmare eschews tank mechanics in favor of a more intuitive play control. When you press Up, Carnby walks up. Down takes him downward, and so on. And Carnby doesn't plod, but instead jogs at an even pace that is more than sufficient outside of combat. Even nabbing and utilizing items is a swift process, although you must enter a menu and equip an object before you can use it. The portable version's handling is a refreshing change of pace from the drunken control response seen in the console edition. 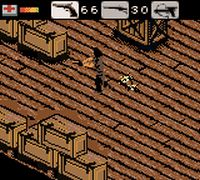 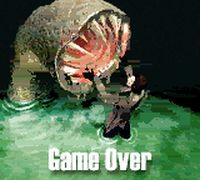 Throughout my playthrough, one question echoed in my head: why? I don't understand why anyone thought New Nightmare needed a handheld iteration. Game Boy Color's audience mostly consisted of younger gamers, many of whom were probably not pining for a scary video game. I also find it unlikely that fans of the series lacked access to the console/PC version and absolutely needed a GBC release. Above all, I doubt anyone played any of the non-portable versions and thought, "You know what this game needs? A watered down remake!"

Game Boy Color's Alone in the Dark: The New Nightmare is a pointless horror adventure. There's no reason for it to exist, and it isn't remotely enjoyable. Its tame and visually nauseating, not to mention banal and unimaginative. Ammo is ubiquitous this time around, not the precious commodity you remember from other versions. Because of that, exploration is damning and not rewarding. Worst of all, the game isn't scary in the least. Sure, no one expected a Game Boy Color title to frighten anyone, but perhaps that should serve as a fair warning against playing the handheld New Nightmare in the first place...
2/5

If you enjoyed this Alone in the Dark: The New Nightmare review, you're encouraged to discuss it with the author and with other members of the site's community. If you don't already have an HonestGamers account, you can sign up for one in a snap. Thank you for reading!

© 1998-2020 HonestGamers
None of the material contained within this site may be reproduced in any conceivable fashion without permission from the author(s) of said material. This site is not sponsored or endorsed by Nintendo, Sega, Sony, Microsoft, or any other such party. Alone in the Dark: The New Nightmare is a registered trademark of its copyright holder. This site makes no claim to Alone in the Dark: The New Nightmare, its characters, screenshots, artwork, music, or any intellectual property contained within. Opinions expressed on this site do not necessarily represent the opinion of site staff or sponsors. Staff and freelance reviews are typically written based on time spent with a retail review copy or review key for the game that is provided by its publisher.