ARENA an Age of Barbarians story is a side scrolling hack and slash game which takes inspiration from the Conan the Barbarian franchise and other B-movie product of its ilk. Its mostly decent and the love is certainly there, but its also altogether pretty rough, which takes away quite a bit from how much fun it might have been.

Arena wears its extreme gore and overt sex appeal as twin badges of honour; the female characters sport thongs, their boobs barely covered, but similarly and in fairness, the men are wearing little more than loincloths. Foes can be cleaved in twain, can be beheaded, can be dismembered. Even onlookers to these arenas of death can have their heads lopped off for leaning in too close, which is admittedly a nice touch.

The makers of Arena have another, arguably better game available on Steam  Age of Barbarian  which plays like a platformer. Arena is more like a short string of basic one-on-one Street Fighter II contests of the most rudimentary kind, with hallways fraught with medieval traps and instant death mini-games interspersed between them. The actual one-on-one fighting isn't as basic as pounding the light or heavy attack buttons towards success, but its not complex either. 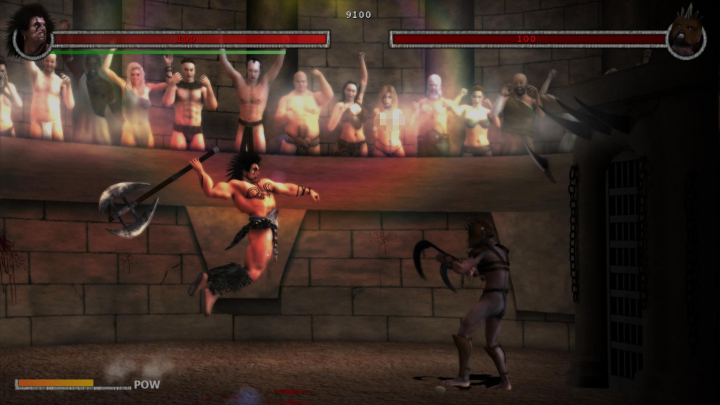 Youll soon realize that rolling is the key to life. The go-to strategy involves rolling past enemies (and their attacks) to get behind them so that you can have at it with your weapon, only to then back off once your reeling foe comes to terms with the damage your ambush has done. Rinse and repeat.

The real challenge then, and the best part of the game, presents itself when you are occasionally forced to face off with multiple foes. Youll need to manage distance, ensure you arent flanked (enemies roll too) and take care not to get greedy when openings present themselves, as enemy counters can eat up your health quickly if youre not careful. Youll jab with your light attack to keep enemies at bay, run and leap into heavy overhead blows to try for heavy damage should you catch your foe sleeping at the wheel, and build up your super gauge all the while, for the unleashing when the moment is right.

Its all very stripped down and imprecise, but as flawed as the main thrust of the game is, the real pain in the ass is the mini-game situation. There are quite a few, such as the over-the-shoulder (think Space Harrier) running-into-the-screen event, during which spears are chucked your way and you have to decide whether to jump over them or duck depending on whether or not they come in high or low. You aren't given much time to make the right decision, and its one hit, and one precious life is lost. Another mini-game has you swimming in a body of water teeming with piranhas. Steer clear or its bloody waters and another life lost. The hallway traps are much more easily negotiated than the mini-games; usually sprinting through with the occasional roll or jump is enough to avoid being crushed by falling objects or impaled after a fall into a dark spike pit. 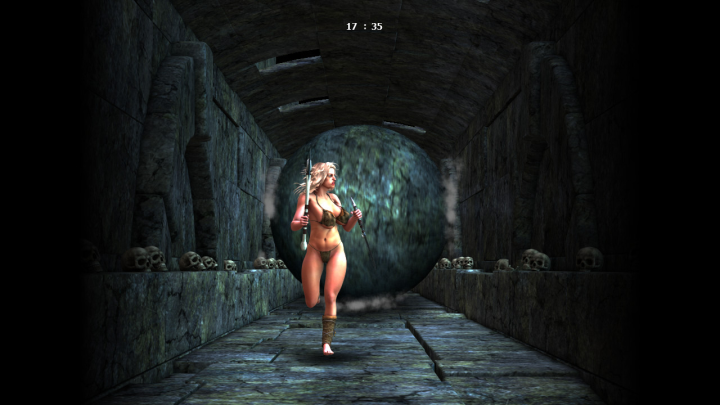 At the end of the day, Arena is a quaint, clunky affair with a heaping helping of blood and skin. The gameplay feels frustratingly languid and beyond the deliberate pacing its also laggy, and so it plays slower than it even means to. In keeping with that theme, the load times between sequences seem unnecessarily long for a game this simple. The music rocks pretty hard, but its difficult to really get into the game when the controls are this dodgy, the gameplay this slow, and the mini-game filler interrupts and undermines the best Arena has to offer, which isnt spectacular in the first place. True, with the inter-level fluff removed, Arena would be a lot smaller, and we would see it for what it really is: a handful of characters going at it in a handful of arenas, with a handful of basic moves to employ.

Still, smaller would likely have been better, as adding the filler mainly served to annoy  it's like elevator music between floors. Only its worse than that, because there's a good chance that the elevator music here will kill you and thereby prevent you from seeing more uninspiring floors. In Arenas defense, you do get to fight sabretooth tigers and the fan service is done well enough that it might just prove irresistible to the particularly salacious and bloodthirsty alike, but if Im being brutally honest, Golden Axe is a better fix to scratch your Conan-esque sexy bloodletting itch. Golden Axe from 89. So, unless Conan and related phenomena are totally your favourite thing, you're better off passing on this one, tits and ass notwithstanding.
2/5

If you enjoyed this ARENA an Age of Barbarians story review, you're encouraged to discuss it with the author and with other members of the site's community. If you don't already have an HonestGamers account, you can sign up for one in a snap. Thank you for reading!

© 1998-2020 HonestGamers
None of the material contained within this site may be reproduced in any conceivable fashion without permission from the author(s) of said material. This site is not sponsored or endorsed by Nintendo, Sega, Sony, Microsoft, or any other such party. ARENA an Age of Barbarians story is a registered trademark of its copyright holder. This site makes no claim to ARENA an Age of Barbarians story, its characters, screenshots, artwork, music, or any intellectual property contained within. Opinions expressed on this site do not necessarily represent the opinion of site staff or sponsors. Staff and freelance reviews are typically written based on time spent with a retail review copy or review key for the game that is provided by its publisher.