To the shortest review I've ever written then: First, we pick our heroine. You can change her boob size, skin colour, hair colour, boob size, face type, hairstyle and boob size. Because nothing else matters here. Right away, we encounter issues with even saving our newly created character. We soldier on. And hit a load screen filled with glistening cleavage and an hourglass wedged between. Clever, right? Minutes later, you might still be entranced by this load screen -- it's not always painfully slow, but it usually is. 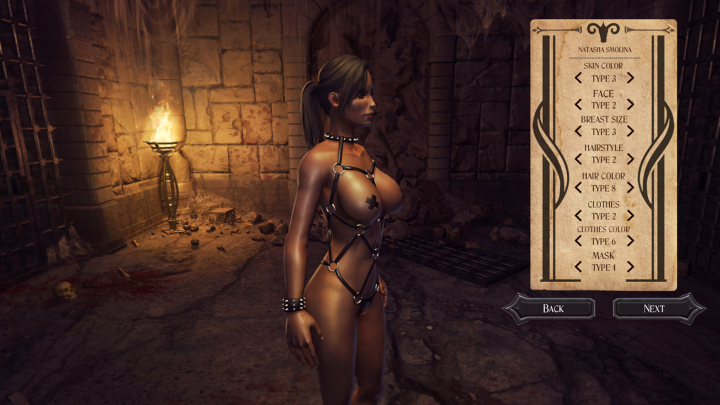 Finally! It's game time. We're treated to a third person perspective so we get to thrill to some minor ass jiggle as we move our avatar about. Ironically, given our viewpoint, we see precious little of the bloody boobs that were to be the star attraction. Anyway, the goal is to find and kneel before four massive phallic altars. If we're successful, a portal will open up that we can jog into to beat the game. That's about the size of it. A successful run will probably take all of ten minutes to accomplish.

But let's not conflate 'short' with 'easy' or 'smooth'. Even if you have killer specs on your PC, Bloody Boobs might barely run. And going to the options menu to tweak for performance, will likely not affect performance. But let's just say you're one of the lucky ones, and the game is running syrupy smooth. Clearly, the game designer's efforts were solely focused on creating a hot 3D model (and wooden face aside, he succeeded), as everything else looks to be the afterthought it probably was. 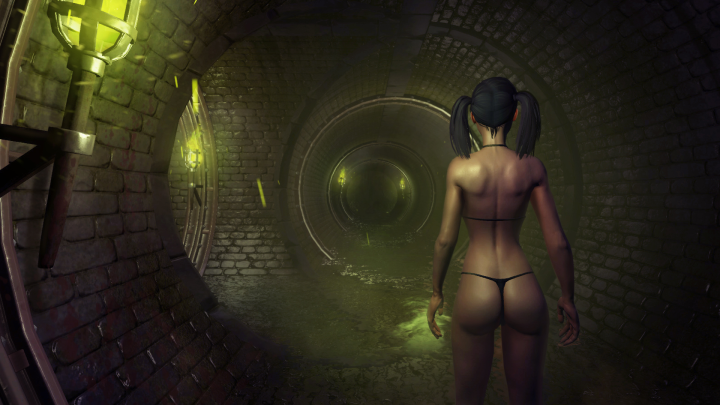 The monster models are funny looking, not scary. When they 'get you,' there's a seemingly innocuous touching of characters, Kung Fu-style, and the screen runs red -- there's no animation to speak of for attacker or victim. The frantic music played when an enemy spots you grates on the nerves almost immediately. The same-looking crypt environs do well to get you lost, so gameplay is reduced to you running around fairly aimlessly, hoping to find altars and avoid monsters with everything left to chance and a different layout each time while the off-putting tune swells and recedes comically in the background. You can't defend yourself, save for laying down mines (yup, mines) in the path of monsters while taking care not to trip them yourself.

Bloody Boobs is a shameful cash grab. Clearly the developer had things backwards from the start: Where Dead or Alive entries are fighting games with hot girls, I'm fairly certain Bloody Boobs started off as a hot girl model, and then someone thought, Hey let's have her run from monsters or something, and make a game of it! Yuck.
1/5

If you enjoyed this Bloody Boobs review, you're encouraged to discuss it with the author and with other members of the site's community. If you don't already have an HonestGamers account, you can sign up for one in a snap. Thank you for reading!

© 1998-2020 HonestGamers
None of the material contained within this site may be reproduced in any conceivable fashion without permission from the author(s) of said material. This site is not sponsored or endorsed by Nintendo, Sega, Sony, Microsoft, or any other such party. Bloody Boobs is a registered trademark of its copyright holder. This site makes no claim to Bloody Boobs, its characters, screenshots, artwork, music, or any intellectual property contained within. Opinions expressed on this site do not necessarily represent the opinion of site staff or sponsors. Staff and freelance reviews are typically written based on time spent with a retail review copy or review key for the game that is provided by its publisher.