In honor of Double Dragon's 30th anniversary, Arc System Works actually did a cool thing: they brought together core members of the original games to make Double Dragon IV. In addition, the NES version of Double Dragon II was chosen as the visual blueprint, an apparent favorite of that console's DD titles. Considering the very topsy-turvy history of the beat 'em up franchise, how irrelevant it's become in recent years, and how many times the license's been mishandled, I wasn't expecting this much thought and care to be placed into a release that came out of nowhere. Seriously, the project's existence was announced only a month before its release! Sur... surely that shouldn't have hinted at the game's overall quality.

But not even five minutes into Billy and Jimmy Lee's latest adventure, I questioned why I was stuck on a raft where nothing literally happened for 19 seconds. I counted. It didn't help that, when the stage started, the first five enemies wandered on screen, one at a time. Worse, all those thugs can be knocked out in one hit because of a knife that never vanishes from the area... It wasn't the best start to a supposed "return to form," but I let it slide for being the first stage. The second stage, however, upped the ante... two enemies on screen! When I first played through this area, I legitimately worried if the returning developers were taking this whole "retro" gimmick a bit too far; the original NES titles had so few enemies on screen because the console couldn't handle any more without the field turning into a flicker-fest. Were they intentionally copying the limitations?? 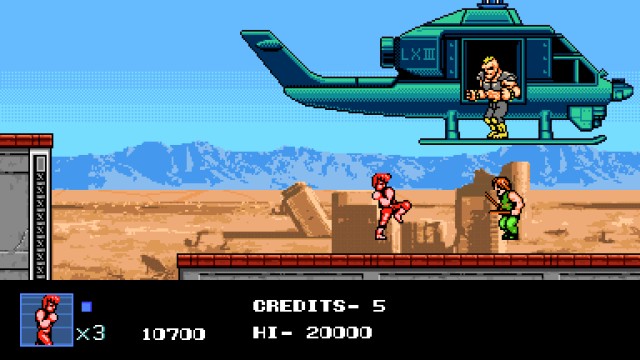 The whole thing feels like the devs were really keen on making references to the NES releases rather than attempt a genuine sequel with a solid structure. Hey, remember the catchy soundtrack from the first game? It's here in random places. Remember when Marian got punched in the stomach and kidnapped? It's turned into a literal punchline. Remember that stupid, masked boss from the second game who vanishes into nothing when you defeat him? Get ready to see him a million times. Because nostalgia makes everything better! If the constant, in-your-face references were the only irritating things about this title, I would have been able to live with that. But as I made my way through 12 stages of thugs, dominatrices, karate masters, female ninjas in miniskirts, and the Abobo Committee, I quickly realized how embarrassingly broken and unrefined certain aspects are.

That asinine raft segment is only the beginning of how bad the side-scrolling platform segments can get. More times than not, you simply jump across two to four easy platforms, even when they're moving ones, and that's it. That's the sequence. Later on, the game "tries" by introducing thrusting spears you have to jump or walk under, or disappearing blocks you have to hop away from, but their patterns are so mundane, they're barely a challenge. In terms of hazards, the hardest it gets are platforms that literally rotate, but they rarely show up. Funnily enough, the only time these sections get "challenging" is when the game gets cheap with players; cross the simple platforms, walk to the edge of the screen, and an enemy is waiting off screen to sneak in an easy hit, or two enemies are standing at the top of a ladder you're climbing on.

Also, at the end of the second stage, you're finally given more than two enemies to pummel on screen, and these encounters only grow in size with each new stage. Plus, if you're doing local two-player co-op, you sometimes get double the amount. If this were any other competent beat 'em up, that would sound great, but the devs somehow succeeded in trivializing this newfound challenge. The DD series always had special attacks you can perform, such as spin kicks, uppercuts, and knee jump kicks, and IV outright gives you these and a wide range of others to execute from the start. This is cool. What's not cool is how overpowered and game-breaking these moves are in conjunction to the overall combat system.

Doesn't take long to figure out that you can jump towards an enemy, activate the spin kick, and repeat this tactic till the end of time. Even with this "clever" plan in action, you can still occasionally bump into a counterattack or simply miss your opportunity, the latter being more likely. This is where the game breaks itself; on the off chance that you missed performing the spin kick, you're immediately allowed to do a ground special attack once you either land on or get up from the ground. There's no complex maneuvers in executing the moves, too. You jump in the air, press one button, and the move happens. The ground recoveries are more offensive, though, since simply mashing the button does the job, with zero chance of failure. Not to mention, there's absolutely no penalty, such as a life drain or limited use, for abusing them, so you're just an almighty brute. It's boring, repetitive busy work.

It's almost like the developers knew about NES DDIII's broken, omnipotent jump kick and decided to make it an intentional mechanic in IV.

Having super strong moves, which you can slickly connect together if timed right by yourself or with a second player, is a fine thing to have in a beat 'em up. It's just that you have to make Double Dragon's oldschool combat system match the intensity of these moves for a semblance of cohesion. The original Final Fight arcade game works because the number of enemies on screen and their ability to counter your fast, agile beatings constantly made the title a challenge. God Hand works because, despite having an insane move list at your disposal, an ingenious mounting-difficulty system is in place to combat your wrath. You can't just shove fast, easily-executable techniques into a methodical, slow-paced brawler like Double Dragon IV, with next to no consequences, and expect everything to gel. It doesn't work.

I may not be the biggest fan of the NES DDs because of their cheap tactics and unpolished mechanics, but even I was able to tell they had a vision, some form of structure, an air of challenge to them. I really wish the developers would have aimed for a genuine, straight sequel that tried improving aspects instead of a disguised tribute that stumbles and fumbles all over the place, because I would rather have an average successor than hot garbage that can be completed with little effort. Yes, there's a 100+ floor horde mode with one life to work with, but I bought this for the main attraction, not some side show. 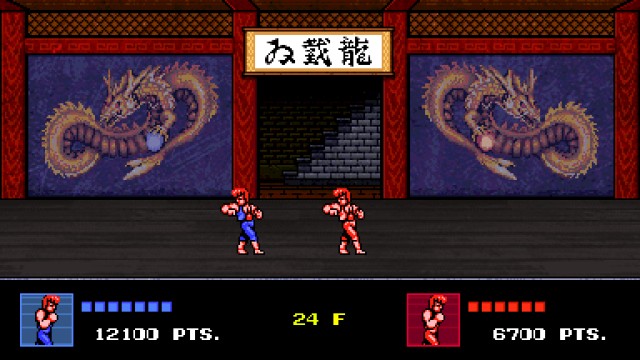 If anything, Double Dragon IV not only does damage to its franchise, but adds another blight to the beat 'em up genre; time and time again, quality beat 'em up releases have demonstrated that so much can be done with the genre, that they can be more than mindless, button-mashing stereotypes that they're often portrayed as. That's probably why I'm more strict on newer beat 'em up releases, because if you're not trying to be more than a template, at least be an entertaining one. Not only does Double Dragon IV reinforce the stereotype super hard, but it also fails at being an enjoyable beat 'em up.

Furthermore to Arc System Works: make sure the next game, if there is one, is given proper playtesting; the fact that enemies can't attack the player character when moved to the very bottom of the screen is disgraceful and screams of being a rushed release.
1/5

If you enjoyed this Double Dragon IV review, you're encouraged to discuss it with the author and with other members of the site's community. If you don't already have an HonestGamers account, you can sign up for one in a snap. Thank you for reading!

© 1998-2020 HonestGamers
None of the material contained within this site may be reproduced in any conceivable fashion without permission from the author(s) of said material. This site is not sponsored or endorsed by Nintendo, Sega, Sony, Microsoft, or any other such party. Double Dragon IV is a registered trademark of its copyright holder. This site makes no claim to Double Dragon IV, its characters, screenshots, artwork, music, or any intellectual property contained within. Opinions expressed on this site do not necessarily represent the opinion of site staff or sponsors. Staff and freelance reviews are typically written based on time spent with a retail review copy or review key for the game that is provided by its publisher.