Dejobaan Games is no stranger to giving their creations bizarre names, as the forever-in-development Drop That Beat Like an Ugly Baby and 2009's AaaaaAAaaaAAAaaAAAAaAAAAA!!! attests to that claim. But with a name like Drunken Robot Pornography, even as a joke, you can't help but be very intrigued, especially when the devs have the audacity to give their first-person shooter a name that makes it hard to market to the masses. The game gets points for first impressions, at least; if you don't immediately jump into a session and let the menu music play out, it actually goes into a lengthy sing-along rap about the history of robots aiding humans.

Then you proceed to single-handedly fight a robot uprising. As bar owner Reuben Matsumoto, the task at hand is to put an end to a robot insurrection in a futuristic Boston, led by your now-sentient robot bartender, Tim, who commandeers giant robots called Titans and several... thousands of drones. You contend with these brutes over the span of 52 stages, in arena-esque, colorful environments that are sleek, glossy, and have abstract designs that resemble something you'd see in old science fiction magazines or the Jetsons; odd, circular platforms, objects made out of ring-like structures, and unnecessary, towering poles as far as the eye can see. 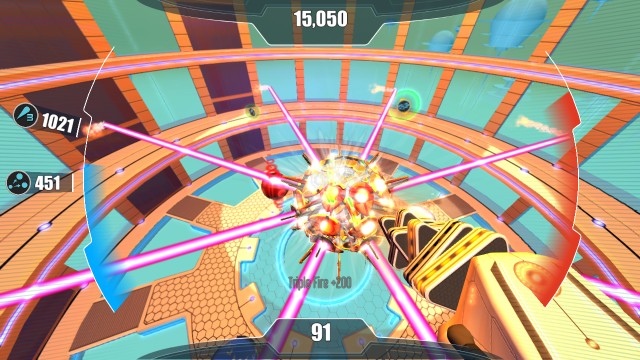 Most battles are with the Titans, and they have some of the most unusual designs I've seen in a FPS in some time. The best way to describe their models is: if you went to a classroom, gave each kid a bucket of Legos or K'Nex, and told them to make the coolest robot designs ever. In any given stage, there's the huge possibility of seeing a ginormous, metallic flower firing multiple, rotating death lasers in every angle possible. Or a humongous, ruthless satellite with hands holding guns. I swear I saw one that looks like a teapot on steroids. You can't just blindly fire into these beasts, either, even if images or footage might imply it; you have to blast away their weak points, usually starting from the farthest body parts from the core, and blow away chunks until the center sphere remains. Keep in mind, you also have to deal with drones, such as flying caterpillars or hordes of bomb spheres, when fighting Titans.

It's very "bullet-hell" in nature, and that concept sounds like it would work horribly for a first-person shooter, especially one where you constantly strafe while shooting, dodging, jumping, and jetpacking through the air. But it's actually a pretty accessible experience. Surprising, considering a normal shoot 'em up at least gives you the advantage of seeing the entire field, but for a FPS, it's limited to what direction you're looking at, regardless of how fast you look around. The concept works because the devs made a lot of stuff as simple as can be without actually making the game so easy. Most arenas are designed in such a way that Titans are almost always stationed in the center of the map. And even when you're in larger places with towering structures blocking your view of multiple Titans, there's red icons on screen to indicate their location.

Normal enemies spawn en masse, but usually in fair spots away from your character, at least when the stage starts out. Honestly, the only time I ever had issues being in the middle of a large group of enemies, with the exception of standing still, was when I wasn't fully paying attention, or when I fell out of bounds and respawned in the starting location. The latter "issue" is a moot point anyway, since the game graciously gives brief invulnerability when it happens, which I actually used several times as a tactic. So at the very least, the devs succeeded in creating a foundation for which chaos and mayhem can strive in. Which makes it all the more unfortunate that they faltered when actually creating DRP's 52 stages...

The beginning does a good job gradually building up difficulty with its stages, making it so that, when things actually get really challenging, you have the skills and knowledge to fight back. However, once you get near the midway point of the game, you kind of notice there's not a whole lot of variety to be had. Considering its arena-based, trials-like atmosphere, you'd think the devs could output more creativity in such "small" locations. There's only so many times you can switch between stages that require scoring huge points with normal enemies and boss stages before things get really repetitive. New goals are introduced, such as destroying generators while being chased by drone armies, or collecting and dropping off cocktails without getting hit, but they're extremely sporadic. The devs just go back to their comfort zone of scoring and boss fights.

The difficulty also takes a bizarre stumble during the mid to late batch of stages. Suddenly, you'll hit a really hard stage that requires the use of all your skills under a strict time limit, losing multiple times. However, the moment you complete the stage, the following four to five stages are absurdly simple, then another really tough stage, and the cycle repeats itself almost nonstop. This would have been somewhat acceptable if there were some genuine variety, hell maybe even if the stages stayed consistently challenging. And that's the biggest problem with the overall adventure: these two main flaws, the repetitive stage goals and the fluctuating difficulty, somewhat handicaps an interesting blueprint. Granted, there's a level editor to mess with, but that shouldn't be a "free pass" to the main game's flow.

They don't make for a terrible experience, but you can't help but feel this release could have been better executed. I'd say the game reaches its peak during the midway point, when the challenging stages have the right level of hard to them; you fail several times in one stage, but instead of being irritated, you immediately try going back in with a "I know what to do!" mentality. If there was more of that and some more variety... who knows? Sadly, the game gets stupid hard during its final five or so stages, to the point where I unabashedly went to the options and lowered the difficulty setting just to get things over with. And it was still hard. Instead of being happy about conquering its 52 stages, the only thing that came to mind was, "Meh, it's over." Not what I was expecting to feel for something called Drunken Robot Pornography.
3/5

If you enjoyed this Drunken Robot Pornography review, you're encouraged to discuss it with the author and with other members of the site's community. If you don't already have an HonestGamers account, you can sign up for one in a snap. Thank you for reading!

© 1998-2020 HonestGamers
None of the material contained within this site may be reproduced in any conceivable fashion without permission from the author(s) of said material. This site is not sponsored or endorsed by Nintendo, Sega, Sony, Microsoft, or any other such party. Drunken Robot Pornography is a registered trademark of its copyright holder. This site makes no claim to Drunken Robot Pornography, its characters, screenshots, artwork, music, or any intellectual property contained within. Opinions expressed on this site do not necessarily represent the opinion of site staff or sponsors. Staff and freelance reviews are typically written based on time spent with a retail review copy or review key for the game that is provided by its publisher.