I like tower defense games well enough that when someone emailed to ask if I would review Defense Zone 3 Ultra HD, I decided to give the game a shot. So far, I haven't come across a title within the genre that I didn't enjoy. With that said, it's clear that some developers know exactly what they're doing and other efforts slightly miss the mark. Defense Zone 3 Ultra HD, unfortunately, falls into the latter category. It doesn't do anything that I would say is definitely wrong, and it checks off virtually every box on my list. Somehow, though, the end result manages to be addictive without actually feeling particularly noteworthy.

The premise in Defense Zone 3 Ultra HD is that... well, there actually isn't any real idea behind it. You're simply defending your off-screen base from an approaching onslaught of generic military enemies (think tanks, infantrymen, Jeeps and jets). This feat you accomplish by slaying any foes who are foolish enough to march, drive, fly or... boat through the map. Taking out those adversaries nets you cash that you can then spend on defensive towers and upgrades. You must survive anywhere from 15 to 40 waves of adversaries, without too many of the invaders making it safely to an exit point. 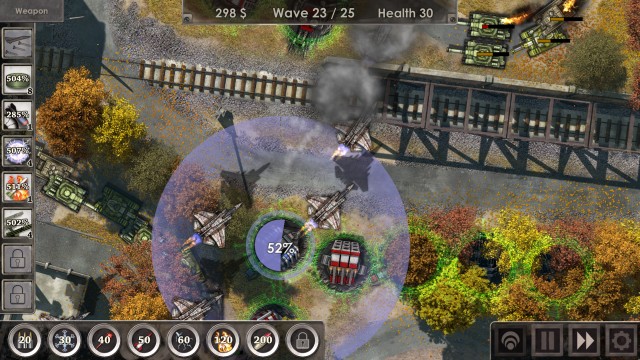 "No duh, Jason," you might say. "That's how nearly every tower defense game works."

And you're right, of course. But in most tower defense games, there's a premise to explain why your effort is so vital. At the very least, you control special characters, or the game takes place in a vibrant fantasy world, or even inside a human body (in the case of one game I recently played). Here, there's none of that fancy stuff. You just select a map from a menu screen and get to work without preamble or even a tutorial. There are some tips on the load screens, if you pay attention and read quickly, but that's as much setup as you get.

Normally, I would be delighted by the lack of a tutorial. This isn't my first rodeo, as the saying goes, and I don't mind jumping in with both feet. Sadly, the game isn't particularly good at letting you know what does what. The different towers that you can place are represented by icons along the bottom of the screen, but no tips pop up if you hover over an option. You just have to place it and hope things work out for the best. To be fair, there are only eight towers, so you'll eventually get a good sense of how most or all of them work, but the process comes with a definite learning curve that shouldn't have been necessary given the ultimately simple nature of the game. 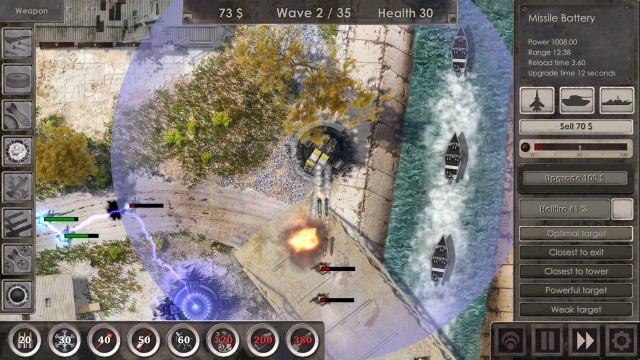 Placing towers is also a bit of a hassle at times. In some games within the genre, there are obvious nodes or some other indicator that makes it apparent what your options are. In Defenze Zone 3 Ultra HD, you have to drag your tower from the menu bar, and then you see grids that indicate the portions of the map where towers can potentially be placed. The size of the tower you have in mind determines whether you can find an actual match from there. In a heated round, this fiddly approach to tower placement wastes precious/vital seconds, but you can at least pause the action if necessary. In some cases, a tower will also be hidden by foliage after you place it, all but disappearing and likely causing you to forget it even exists. I hate it when that happens.

Something else that took me by surprise was the default view of the map, which doesn't show the entire battlefield at once. You can use the WASD keys to move the camera about, and the mouse lets you position and interact with your towers. Most areas are about the size of four computer screens, so it's easy to miss seeing something vital unless you're constantly panning across the map. Fairly often, I would place a tower at a key choke point and then scroll over to some other part of the battlefield, in the process forgetting to upgrade that tower until after its weak default form permitted a whole line of tanks to slip past my inadequate defenses. That sort of disaster is frustrating and potentially game-ending every single time it occurs, which might be quite often. If you zoom out with the scroll wheel (an option I didn't figure out even exists until after I had played something like 10 hours), you can eventually see the whole map at once, but it's fairly clear that the default perspective is how you're meant to play.

Most of the above complaints amount to nitpicking, though. My biggest issue with Defense Zone 3 Ultra HD is actually its iffy game balance. There are only 8 maps, but each one takes ages to clear, even when you play with the action sped up a bit. It's not unusual for a stage to require more than an hour to clear, and there's no way of considerably speeding that up. Playing on the Easy difficulty setting eases the pain a bit compared to Normal, but you still might devote a ridiculous amount of time to a map, only to watch all of your progress amount to nothing in the last round when a massive swarm of planes flies into your air space or whatever. You'll kill thousands of enemy units during the typical skirmish, and I can't help but wish things that had been adjusted so the typical stage took more like 15 or 20 minutes. 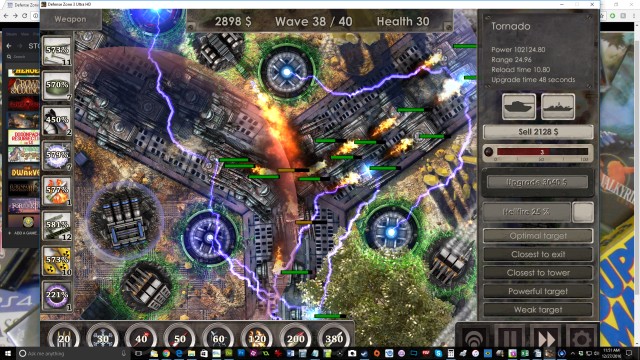 On a more positive note, the game is visually impressive and arguably even worthy of the "Ultra HD" mention in its title. Though the maps don't let a person see enough of the action by default, they're at least very detailed as they work to confound players. Units explode in a satisfying manner. Flame throwers spout flames convincingly. Missiles leave trails of smoke and vapor. Each unit type is easy to distinguish from the next (which I definitely appreciate), and the sound effects are great. I even found myself humming the battle theme at one point. On top of that, I didn't encounter any obvious slowdown even when things were at their most chaotic, with tons of units converging while shrapnel was flying and missiles were launching and my computer had a variety of other beefy programs idling in the background.

I've played quite a few tower defense games in recent years, and I've liked most of those other games more than I like Defense Zone 3 Ultra HD. The game's various elements simply didn't come together quite the way I would have liked, but that doesn't prevent it from being a solid option for those players who are looking for a difficult tower defense title to keep them busy after they've cleared some of the more popular titles. Give it a shot if you can find it offered at a price that fits within your budget. It should keep you entertained for 10 to 15 hours, and not every game can say that...
3/5

If you enjoyed this Defense Zone 3 Ultra HD review, you're encouraged to discuss it with the author and with other members of the site's community. If you don't already have an HonestGamers account, you can sign up for one in a snap. Thank you for reading!

© 1998-2020 HonestGamers
None of the material contained within this site may be reproduced in any conceivable fashion without permission from the author(s) of said material. This site is not sponsored or endorsed by Nintendo, Sega, Sony, Microsoft, or any other such party. Defense Zone 3 Ultra HD is a registered trademark of its copyright holder. This site makes no claim to Defense Zone 3 Ultra HD, its characters, screenshots, artwork, music, or any intellectual property contained within. Opinions expressed on this site do not necessarily represent the opinion of site staff or sponsors. Staff and freelance reviews are typically written based on time spent with a retail review copy or review key for the game that is provided by its publisher.