Unbox, the first major release from a new studio called Prospect Games, doesn't feel much at all like a typical first release. It's ambitious, it has a terrific personality, and it does a commendable job of touching on some of the highlights of its genre. Unfortunately, the game also suffers from a wonky camera and overly touchy controls. Those two shortcomings wind up mattering quite a lot.

The setup is that you are a sentient cardboard box named Newbie. You were recently created by GPS, which is an organization that delivers packages all over the planet and beyond. You are merely the newest in a line of animated boxes, but your job is to save the company that built you. This you attempt by completing chores doled out by the boxes that came before you and failed, by collecting worthless trinkets, and by facing off against the villainous Wild Cards (rival cardboard entities that want to make GPS go broke and maybe also wouldn't mind destroying the world as part of the bargain). 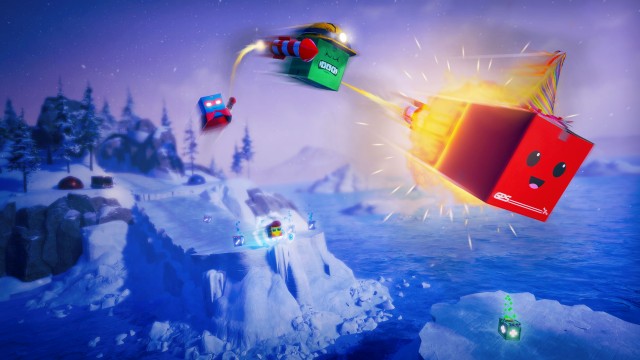 If you want a list of games that might have influenced the developers, then Banjo-Kazooie and possibly Super Mario 64 would place right near the top. You explore vibrant worlds, minimally interact with a few other colorful characters (who make gibberish sounds when they talk, so that you must read the subtitles) and collect a bunch of rolls of golden packing tape that you find scattered around the various environments. You also free other cardboard boxes from cages, when you can find them.

Unbox adds a few elements of its own to the mix, as well. Though you'll spend most of your time platforming, you also get to complete some objectives that force you to fire rockets at adversaries positioned around a confined area. Elsewhere, you drive vehicles in races or on scavenger hunts. Such moments aren't all that common, but they pop up often enough to break up the monotony that might otherwise set in during the eight or ten hours it should take you to clear the campaign.

There aren't a lot of unique environments on offer. Not counting a needlessly expansive--but fun--level hub area, which contains plenty of stuff to collect all on its own, there are only three main regions. One of those regions features a lot of rolling hills and palm trees. The second one offers a much colder climate, with snowy fields and frozen mountaintops. Then, the adventure concludes in a jungle environment, complete with crumbling ruins. Although the limited number of distinct destinations to visit might sound like a serious shortcoming, though, it's really not. The sprawling maps are loaded with hidden crevices to explore, and the sense of scale is impressive indeed. Crossing a given map takes quite some time, and there's a remarkable sense of freedom. Draw distance is excellent, as well, so you can often look out over the expansive terrain and see all kinds of goodies to gather, with no load times to slow things down once a stage begins. 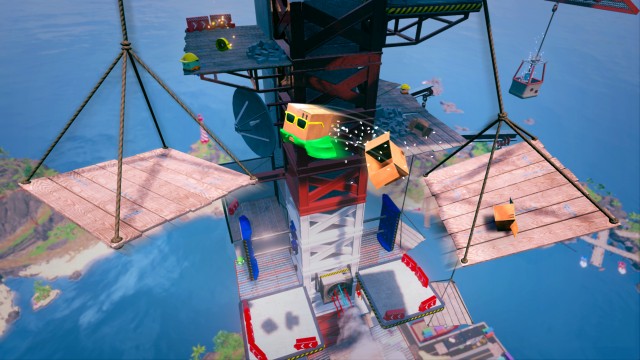 The game also makes the most of its unique premise. Cardboard boxes don't seem like they should provide much fodder for a decent narrative, but the characterization here is solid. Some of the boxes are mischievous, some are stupid, and others heroic. You can dress the main character up in different outfits by visiting the cleverly named Swift Tailoring building, and it's hard not to laugh at the outfits some of the characters wear. There are some clever in-jokes, as well, which make it worth paying attention to the dialogue. The primary plot is bare-bones, but you can find special objects hidden throughout the stages. They offer numbered diary entries, twenty in all. Together, they tell a story that explains some of the background and add a sense of mystery.

If only the controls weren't so maddening, Unbox would be easy to recommend, based on the numerous merits outlined above. Alas, the experience too often feels like a chore.

As noted, each of the proper stages is huge. However, you're capable of covering a lot of ground very quickly. You start rolling, slowly at first, and then with increasing speed as you gain momentum. You can make a hop or a leap with the jump button, and as long as you hold it down, you'll immediately jump again as soon as you touch something solid. It's also possible to "unbox" by pressing a separate button, and in this manner you can chain together as many as seven total leaps: your first hop, and then additional bursts from there, using chunks of your life meter. 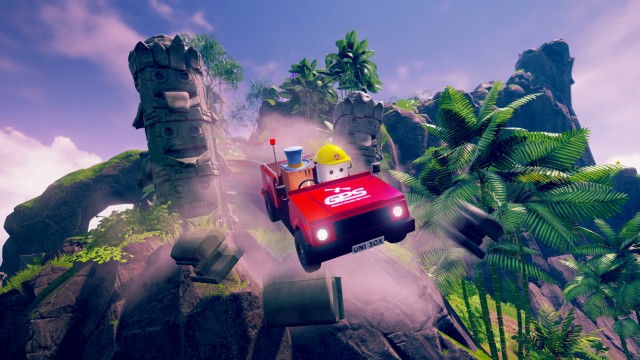 When your goal is to cover a lot of ground in short order, the physics work in your favor. It's fun to cruise around the map, dropping discarded bits of cardboard as you boost to high ledges and enjoy the scenery. Checkpoints are scattered all over the place, along with items that restore your energy meter, so you'll spend a lot of time soaring and swooping until it feels almost like second nature. However, there are also cases when you need to move with absolute precision, and Unbox falls apart in those instances. Managing a tiny hop between platforms while completing an objective where unboxing is disabled is exasperating, because the jump button is overly sensitive. Slight variances in how hard you pull the right trigger on your controller (or press the Space bar, if braving the keyboard/mouse control scheme) make an enormous difference in how the box moves on screen.

Driving sequences, though not common, are also ridiculous. The left analog stick controls speed and the right one steers. Vehicles are overly responsive, and the physics system somehow manages to feel floaty and jerky at the same time. It's far too easy to get hung up on objects within the cluttered environment, as well, and the timer for some challenges doesn't feel generous enough by half, especially when you're dealing with those issues.

The camera does you no favors, either. It requires constant adjustment just so that you can see where you're trying to hop, and it likes to spin out of control the minute you're trying to hone in on an object positioned atop a high column or in an otherwise tricky location. When you're driving, steering seems to swing the camera up so that eventually it's pointing almost directly at the ground and you can't see upcoming obstacles until you give it a nudge in the right direction. It's a constant source of distraction.

Provided you can deal with the irksome controls and the inadequate camera, Unbox is one of the year's more pleasant surprises. Prospect Games came out of nowhere and presented a three-dimensional platformer that takes full advantage of both horizontal and vertical orientation, while keeping the player entertained with winning personality and a vibrant world that is often a joy to explore. If you've been looking for something to keep you busy until Yooka-Laylee finally arrives, you could certainly do worse. Here's hoping Unbox does well enough for its developers that they're able to produce a superior follow-up effort.
3/5

If you enjoyed this Unbox review, you're encouraged to discuss it with the author and with other members of the site's community. If you don't already have an HonestGamers account, you can sign up for one in a snap. Thank you for reading!

© 1998-2021 HonestGamers
None of the material contained within this site may be reproduced in any conceivable fashion without permission from the author(s) of said material. This site is not sponsored or endorsed by Nintendo, Sega, Sony, Microsoft, or any other such party. Unbox is a registered trademark of its copyright holder. This site makes no claim to Unbox, its characters, screenshots, artwork, music, or any intellectual property contained within. Opinions expressed on this site do not necessarily represent the opinion of site staff or sponsors. Staff and freelance reviews are typically written based on time spent with a retail review copy or review key for the game that is provided by its publisher.