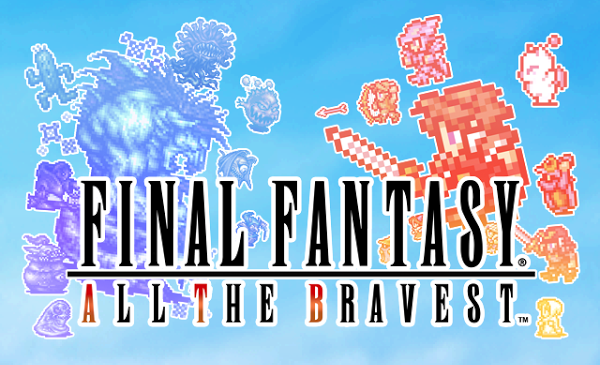 Square Enix loves appealing to nostalgia. Its developers are happy to relive the glory days of sprites, espers and elemental fiends. That passion for a bygone era ensures that some of the company's best material won't likely fade into obscurity any time soon (as evidenced by the umpteen re-releases of Final Fantasy IV through VII). Unfortunately, the reliance on classic content has also led to some lazy rehashes that are best forgotten...

Enter Final Fantasy: All the Bravest, a free-to-play RPG that pits you against the series' most memorable foes, but without all of the burdensome dungeons, cutscenes and entertainment that typically get in the way. The campaign starts you off with a handful of generic "warrior" class characters and pits them against goblins from the original installment in the Final Fantasy series. By tapping on a warrior, you prompt him to slash his foe. He'll then return to his initial position while an action gauge refills over his head, letting you know when you'll be able to utilize him again.

Unlike other Final Fantasy titles, multiple characters can attack at a single time. This allows you to launch an all-out assault on the opposition and annihilate standard enemies with ease. Your newfound strength is especially helpful when in fever mode, which you can activate every three hours. Once it activates, you can temporarily barrage monsters without having to wait for active time gauges to refill.

As you advance through the campaign, you unlock additional classes such as summoners, rangers, black mages, samurai and vikings. On top of that, your party levels up as a whole rather than individually, and the levels you gain eventually unlock extra party slots. In other words, your contingent grows from a meager, homogeneous force to a varied army of nameless heroes. Eventually, your faction becomes so large that it's easier to repeatedly rub the screen than it is to tap each character. As if possessing a sizable infantry isn't enough, fallen adversaries also occasionally drop weapons that bestow permanent, passive advantages to entire jobs. For instance, all thieves and dancers gain a small attack bonus from the mythril knife, and the sword Ragnarok grants most sword-wielding troops a +10 boost.

Of course, your opponents don't just stand there and allow you to murder them in droves. They bite back, sending each soldier who sustains a blow flying off the screen. If everyone disappears, the game still isn't technically over, though. Every three minutes after defeat, one random character returns to the fray. As you might have guessed, that single unit is pretty much useless on his own and dies almost immediately. The good news is there's an hourglass available that will revive your whole party. The bad news is the hourglass only comes with ten uses, though you can pay actual money to replenish it.

All the Bravest's campaign consists of several regions inspired by classic world map locations. Final Fantasy VI's Narshe Plains make an appearance, as well Fabul Waterway from IV and Palamecia Desert from II. Each area offers four stages, two of which feature random encounters against average foes like wolves and giant insects. However, rare bosses also pop up during random encounters, including Deathgaze, Omega and Skull Eater. The other two levels house bosses, which usually leads to a memorable brawl with a primary antagonist. For instance, the Eureka Forest segment pits you against Hein, a major villain from Final Fantasy III, and later against the Cloud of Darkness, the final boss of the same title.

I'm okay with a game that basically exists to serve as a trip down memory lane. What grinds my gears about All the Bravest is that it's executed in the least inspired possible way. For one thing, the game's combat system is so crude that every fight is exactly the same, and none of them are mechanically reminiscent of their classic counterparts. This is a huge misstep, because it's the strategy involved in some of those conflicts that made them so memorable. Remember the struggle against Cagnazzo in Final Fantasy IV? What stood out about that confrontation was the villain's devastating tsunami, which he telegraphed by gathering water around him. Doing this also made him extremely weak to lightning-based attacks, so hitting him with Tellah's Thundaga spell not only shaved off a huge chunk of his hit points, but prevented the tsunami. Fighting the guy without using lightning spells, though, was suicide.

In All the Bravest, you deal with Cagnazzo by mindlessly tapping your party until he's dead. In fact, this time around he's so weak that his cohort Scarmiglione joins him. The pair of them still falls with minimal effort on your part. The fight is so far removed from the source material that it feels like you're rubbing a phone screen that happens to bear the likenesses of the two fiends, not actually battling them.

Believe me, it gets worse. Eventually, the game's difficulty rating becomes overwhelming. This is to be expected, because that's how effective video games operate. However, RPGs are supposed to offer viable methods of boosting your party. You might find that grinding for experience has its limitations. Eventually, you hit the level cap and find that you're still not powerful enough. So you decide to tediously farm hidden weapons, spending hours trying to trigger rare encounters for naught. Even that scheme doesn't get the job done, because late campaign bosses are still stomping you. So what's a gamer to do?

Well, for starters you can go on Twitter and advertise the game in exchange for an additional party slot, resulting in a maximum party size of forty (it would be thirty-two without this feature). Yeah, that's right: Square Enix wants you to spam their product on a social network in exchange for a much needed party boost. You can only use this feature every twenty-four hours, so you have to plug the game every day for over a week to fully benefit from it.

Your only other recourse is to recruit special characters like Cloud, Squall or Lightning, as they tend to dish out major damage. However, they cost a buck each, and there are thirty-five of them. Were you to recruit everyone, your final bill would be $35, which you could just as easily use to buy multiple Final Fantasy titles that are actually worth playing. Worst of all, you don't get to choose which character you receive. Oh, you wanted Red XIII and not Rinoa? Tough. Kiss that dollar goodbye and try again. Maybe after a dozen or so attempts you might get Nanaki.

Final Fantasy: All the Bravest offers three additional regions, such as the Midgar outskirts from Final Fantasy VII, for $4 apiece. That might be a tempting offer if All the Bravest weren't a minimally interactive rehash that not only fails to capitalize on the clicker genre's formula, but biffs it in regards to throwback material. I tend to avoid calling a game like this a cash grab, because making money is the goal of any piece of art or entertainment [UPDATE: fuck microtransactions]. The creators of those goods need food, shelter and drugs like the rest of us. What separates a solid product from junk is how well its creator can pass it off as something more than a black hole through which all your hard earned cash disappears. And in that respect, All the Bravest fails miserably.
1/5

If you enjoyed this Final Fantasy: All the Bravest review, you're encouraged to discuss it with the author and with other members of the site's community. If you don't already have an HonestGamers account, you can sign up for one in a snap. Thank you for reading!

© 1998-2021 HonestGamers
None of the material contained within this site may be reproduced in any conceivable fashion without permission from the author(s) of said material. This site is not sponsored or endorsed by Nintendo, Sega, Sony, Microsoft, or any other such party. Final Fantasy: All the Bravest is a registered trademark of its copyright holder. This site makes no claim to Final Fantasy: All the Bravest, its characters, screenshots, artwork, music, or any intellectual property contained within. Opinions expressed on this site do not necessarily represent the opinion of site staff or sponsors. Staff and freelance reviews are typically written based on time spent with a retail review copy or review key for the game that is provided by its publisher.