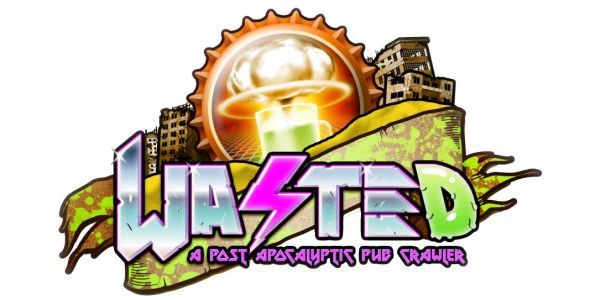 Wasted is a first-person shooter with roguelike elements. Oh, quit groaning! I know digital marketplaces are breeding grounds for mediocre "roguelite" titles these days, but this one is actually worthwhile. For one thing, it sports a charming blend of cel-shaded visuals, goofy humor, super deformed character models and truckloads of violence. We're talking bullets flying everywhere, limb removals via shotgun and explosions that reduce corpses to featureless torsos. Surprisingly, you can still loot these adorably gross remains. I guess incendiaries don't affect items kept in pockets...

Living in a post-apocalyptic world that's perpetually trapped in the '80s, you scour the wastelands in search of procedurally generated bunkers called "coolers." Coolers are essentially your standard dungeons: multi-floored structures consisting of convoluted hallways and rooms that contain goodies and dangers alike. That sounds awfully trite, doesn't it? What separates Wasted from middling rogue-ish titles, though, is the sense of wonder and caution you feel every time you kick down a door. You could find an unpopulated chamber full of healing items, or a cache of pencils and mugs guarded by mutant dogs. Of course, you might also stumble into an empty bathroom and hear the terrifying buzz of a proximity mine or the robotic voice of an automated turret. Wasted's surprises aren't entirely beneficial.

Mostly, though, you'll encounter situations similar to the brutality mentioned in the first paragraph. You open a door and a handful of raiders armed with bats and brass knuckles spill into the corridor. They form a circle around you and either beat you senseless or accept your bullets with dying groans. My favorite moments, though, occur when you barge into a room and stumble upon multiple enemy factions at war. For instance, you might witness raiders bludgeoning atomic zombies called "rottymen," while security drones fire energy weapons from a safe distance. It's especially entertaining watching the tech savvy Junk Dogs hop all over the place while slicing into the DEA-like warriors from the SOB (short for "Syndicate of Buzzkills").

Of course, sometimes there's also a tripod-mounted, motion-triggered gun trap lurking behind a door. Before you can side step, you set off its laser sensor and watch in horror as the firearm unloads its clip into your chest. To make matters worse, each blow you sustain blurs the screen, which renders you blind when dealing with automatic weaponry. 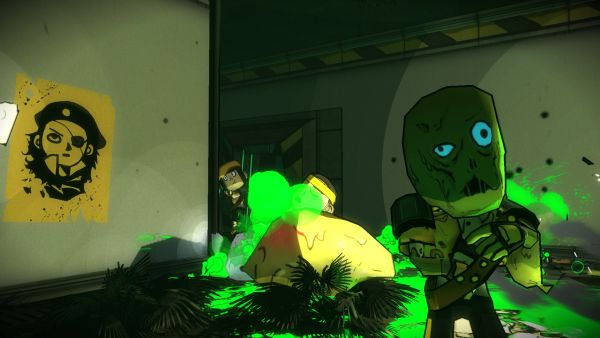 You will die often in Wasted. You push into a shooting range and fail to check for a turret above the door. The weapon detects your presence and guns you down before you can exit. Or you walk past an explosive barrel and trigger a mine sitting near it, thereby falling victim to two explosions. Or someone with a shotgun catches you unawares and blows you away at nearly pointblank range. Or you execute a perfect leap over a pool of toxic waste with a mere two or three hit points remaining, only to land on broken glass and perish anyway.

I won't lie, though. There are moments where you don't croak because of rotten luck or stupidity, but because the game had you fairly outgunned. There's isn't much you can do when a Spewman hits you with repeated rounds from his automatic rifle, shoving you into a toxic puddle as an SOB agent positioned on the sidelines peels off shots from his Clap-17 pistol for good measure. I could dredge up any number of similar examples, but I have to keep this review within a certain word count and I'd rather not devote it to profanity-laden ramblings.

Death is a bummer in Wasted, because it's permanent. You don't get to reload or respawn (assuming you don't quickly exit to the main menu before officially expiring). You lose everything you worked for, with the exception of any alterations made to your shack and any items or cash stored there. It's especially disheartening, though, if your character had a wealth of bonuses and terrific equipment. Yeah, those are also gone for good, though you can purchase unique items you lost from a lost and found counter. 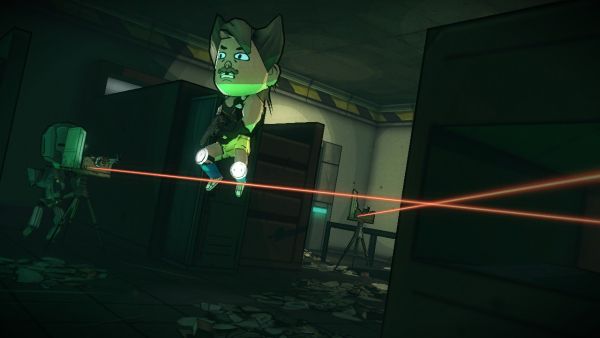 This might sound odd, but the hardest thing to part with in Wasted is a hangover. Unlike in real life, binge drinking booze in Wasted doesn't give you a constitution penalty or a weakness to noise. Rather, guzzling the dozens of irradiated beverages the game offers bestows permanent advantages, such as regeneration, improved damage, strengthened defenses or even the ability to make your enemies explode when they die. If anything can get you through this face-breaking campaign, it's a staunch lineup of hangovers, complemented by choice armor and a sound strategy.

This is where Wasted comes to life. Repeated deaths teach gamers to tread lightly, nab only the choicest hangovers and take advantage of circumstances. For instance, instead of charging into the fray, it would be wiser to let the opposition finish their infighting while you pick off the survivors. Better yet, if there's a massive mutant dog in the mix, just plug a bullet into that beast and watch as it bursts into parasitic puppies that suck the life out of opposing humans. 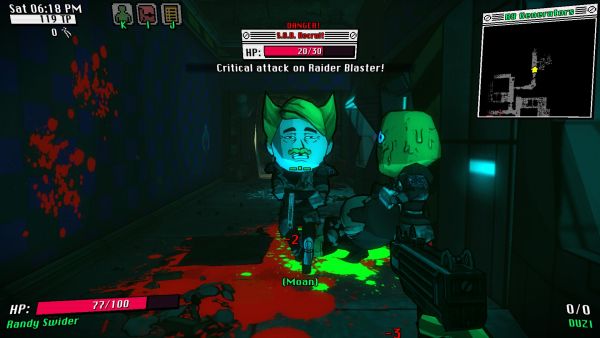 Before long, you should develop a routine and come to enjoy Wasted's snappy combat and insane battles, especially those that ensue in the latter phases of each cooler. The last few floors feature spacious rooms and the heaviest and least idiotic gunmen. Expect to run for cover often, circle strafe as much as possible and make every bullet count. Ammo refills are scarce and restorative goods are even rarer, so death and empty clips are a constant possibility. Let me tell you: there's no colder terror than the realization that you've got to take on the heavies with only a crowbar and a fading glimmer of hope.

With a game like Wasted, I typically either gush over its extreme challenge factor or praise the addictive sense of accomplishment you get from victory. However, your failure and success are not what make Wasted a great roguelite. It took me ten hours to complete the first cooler because I continually made rookie mistakes. Rather than rage quit, I decided to tough it out and see if I could improve. I tinkered and experimented, died and learned. Eventually, I figured out how to get the upper hand. Those long, swear-ridden hours of education were ultimately what I enjoyed most. I know this is going to sound corny, but the ends weren't nearly as thrilling as the means. The measures the game took to prevent me from securing those ends only served to make the means worthwhile.
4/5

If you enjoyed this Wasted review, you're encouraged to discuss it with the author and with other members of the site's community. If you don't already have an HonestGamers account, you can sign up for one in a snap. Thank you for reading!

© 1998-2020 HonestGamers
None of the material contained within this site may be reproduced in any conceivable fashion without permission from the author(s) of said material. This site is not sponsored or endorsed by Nintendo, Sega, Sony, Microsoft, or any other such party. Wasted is a registered trademark of its copyright holder. This site makes no claim to Wasted, its characters, screenshots, artwork, music, or any intellectual property contained within. Opinions expressed on this site do not necessarily represent the opinion of site staff or sponsors. Staff and freelance reviews are typically written based on time spent with a retail review copy or review key for the game that is provided by its publisher.