Deathsmiles first sneaked onto my radar on May 10th, 2009. Oh, I remember it well; it was the day a dedicated chum wrote this review to effusively praise the then-exclusive Japanese Xbox 360 release. It was a spiteful missive, written with the smug understanding that one of Cave's greatest bullet hells was now resting comfortably in his abode. The game was unobtainable to the rest of us, so what better way to rub salt into our wounds than to write about it so glowingly? Do not mistake his eloquent praise as anything but pure malice.

I'm savouring this moment, then, because it's not often I get the last laugh. There's worldwide interest in Cave's work, and understandably so, but it still came as a surprise when a North American release followed a year later. That didn't actually help me much; Europe is often the unwanted stepchild of the niche title porting circles. But then something unexpected occurred: near the start of 2011, an EU port dropped. And it wasn't any normal port  no, no, no! It was a deluxe edition featuring numerous new modes, a new cast member and all kind of glorious swag you'll not find written about in the above-linked review because he didn't bloody have it. Or, if he did, he purchased it separately as DLC. It was a smug time, but I bring this up for nobler reasons than to crow about it. The port is particularly relevant now because when Cave discovered Steam and decided to port a second game to the platform, the developers settled on the superior European strain of Deathsmiles. 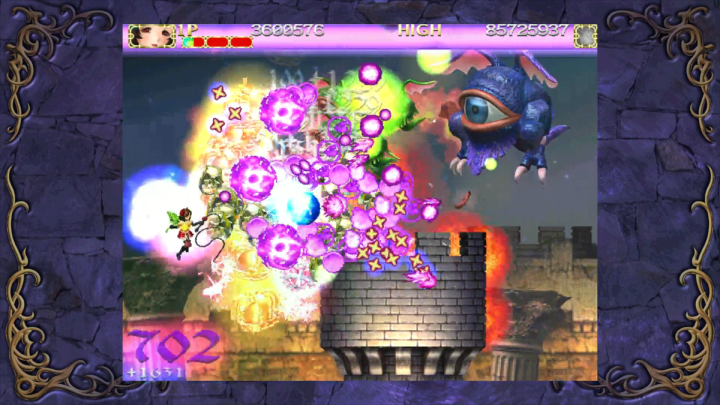 So, let's talk about game modes. As well as a perfectly emulated version of the original Arcade port, there's also a remastered Normal mode and a devious 1.1 edition. Then, those three modes return in Mega Black Label form, which includes the new playable character and reshuffled enemy patterns. These things make a lot of difference, too. Playing the game in Arcade presents the purest version, but Normal is more or less the same game with souped up graphics and a better resolution. Its base mechanics are deceptively simple; there are only three buttons to pick from  one shoots left, one shoots right and the other drops the obligatory screen-clearing bomb. You can muddle your way through the game with just that knowledge, but it won't provide you with the big scores some of us need to boost our egos. To do that, you need to pick your shots more carefully. Pressing the attack button on its own grants a small smattering of weak, fast shots, while holding it down produces a constant stream of aggression. What you use to explode enemies governs what kind of score-enhancing pick-up they produce. Weaker foes should be felled with weaker shots. Larger foes should be smashed with mighty streams.

Picking up boosts adds to a growing counter and, should you manage to reach 1000, you can enter a hyper mode while the counter winds down again. Using this ability is key to high scores, since wasting it in poorly populated stretches means a difference of millions of points. Another factor is difficulty level. Deathsmiles has a bit of a soft spot for you; upon selecting any of the initial six stages to wage war against, you're given the chance to pick between Level 1 to Level 3. The higher the level, the more significant the difficulty and the resulting points you gain. Higher levels also give you access to things you wouldn't see in the easier stages. Stage 1.1 boss, Deathscythe, is a cackling caricature of the Grim Reaper, transmuting into an innocent pumpkin to filter to each side of the screen. On the easier levels, the massive scythe that prompts his name is pure decoration. On the harder ones, its swings cut off large sections of the screen. There's that and--should you win--a shower of spiteful suicide bullets when he explodes. 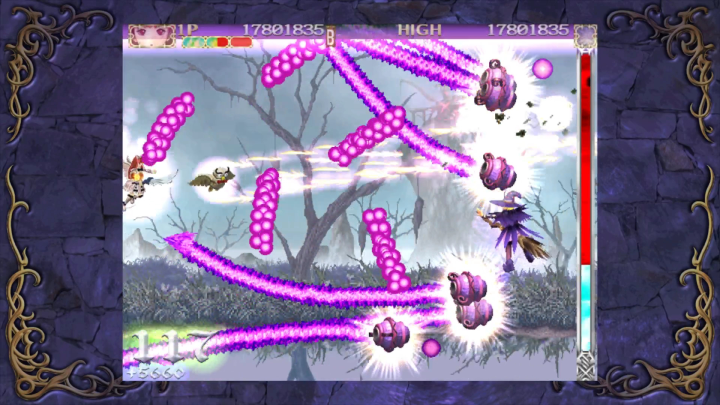 Suicide bullets are a bigger feature in the 1.1 strain. Everyone you shoot has them, but the game makes them easier to manage. In all strains, suicide bullets are annulled by your satellite helper - in Deathsmiles case, an adorable mascot familiar. Outside of 1.1, you control them in a similar fashion to BioHazard Battle, wherein they rotate round you in the opposite direction in which you move. So, for them to cycle through to your left, for example, you would have to move to the right. You could use them to eat up the extra bullets with some pre-planning, but the greater numbers 1.1 offers make it a bit of an ask. As such, the familiar becomes directly controllable and can be easily nudged into the path of bullets, which it gobbles up and turns into points. To make it all a little bit easier, prompt for any of the MLB versions and youll find previous enemy, Sakara the Swamp Witch, playable.

Which is handy, because she has two familiars. That makes it easier to plough through the swarms of bullets you produce when you turn uncountable enemies into corpses. Deathsmiles is too stylish to lean on overused fighter crafts to slip through the constant bullet walls, so instead has you wage war with a handful of loligoth girls who each possess unique quirks. The youngest of the bunch, Casper, has a bloodthirsty bat familiar who can spit out arcing balls of rolling plasma. Shy, bespectacled Colletes dragon chum offers powerful but short-ranged tongues of flame. Ive talked a lot about the mechanics of this game -- and Im not done doing so just yet -- but the gothic fantasy world is stunningly realised here, and absolutely obsessed with trying to kill you. Graveyards spawn plasma-spitting crows from shadowy tombstones, while bipedal ram-headed monstrosities mingle with mammoth ogres, all firing skywards from opposite sides of the screen. Other stages fling out serpentine plants that belch tadpole-shaped lasers that lazily wriggle around the screen, along with cycloptic swarming bats pinging bullets at you from their singular eyeballs. Slice your way through them - Cave kindly supply a very well-defined hit box to help you wiggle through all the bullets - and maybe youll see a few of the bosses.

Which gives me a chance to talk about Mary. Shes a giant cow. She wants to kill you. 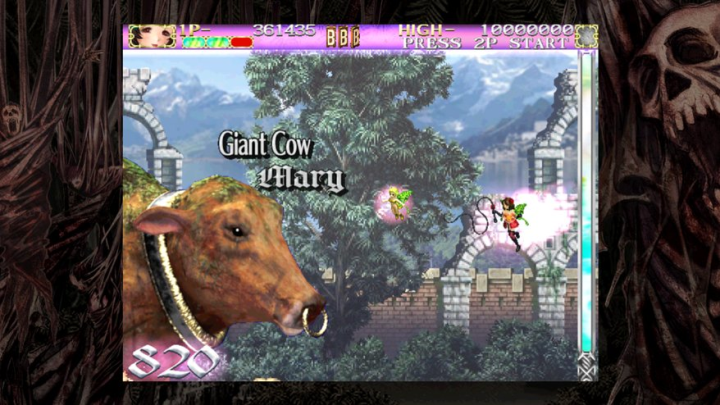 Some of her offence is rampage-related. Its what angry giant cows are known for. Each furious shake of her head brings in fresh bullets. But she also commands a small army of giant cubes, which come at you in waves. Sometimes they come head on in columns you can't dodge, forcing you to push them back with concentrated bursts of your own firepower. Sometimes, they sneak in from the roof or the floor, cutting out huge sections of the screen until they can be destroyed. Its tricky work, but theres still a giant cow - her name is Mary - trying to kill you. Shes very keen on the idea.

Other boss fights include a possessed tree that launches bullets at you out of obligation, but is happier using massive sentient apples that grin inanely at you while chasing you around the screen, and a huge rotting face chained to the remnants of a graveyard that summons pulsating, deadly fireflies from the bottom of the screen that eerily rise in complex patterns. Youve done well if you manage to survive all of that. Youll do even better if you stay in one piece once gravity remembers how its supposed to work, and everything comes plummeting back down to earth.

But you can make it all easier on yourself with the level selects. Level 1 doesnt even feature some of these attacks, but is still able to kick your arse. The MLB modes cater to the masochist inside some of us and bolster the Level 3 setting (you will die) with Level 999 (weve already booked your funeral). They throw in extra levels, extra boss fights and a secret end-of-game encounter that you can only unlock by meeting ridiculous requirements. Theres new modes built atop new modes -- a legion of options to drown in, re-specing the game for the hardcore and casual alike. Online co-op is sadly unavailable, and Ive had to squeeze that in at the end of this review so I can point to something as a negative. Because Zigfreid was right back when he placed this game on my radar; Deathsmiles was a fantastic game in 2009. Its just that its even better in 2016.
5/5

If you enjoyed this Deathsmiles review, you're encouraged to discuss it with the author and with other members of the site's community. If you don't already have an HonestGamers account, you can sign up for one in a snap. Thank you for reading!

© 1998-2020 HonestGamers
None of the material contained within this site may be reproduced in any conceivable fashion without permission from the author(s) of said material. This site is not sponsored or endorsed by Nintendo, Sega, Sony, Microsoft, or any other such party. Deathsmiles is a registered trademark of its copyright holder. This site makes no claim to Deathsmiles, its characters, screenshots, artwork, music, or any intellectual property contained within. Opinions expressed on this site do not necessarily represent the opinion of site staff or sponsors. Staff and freelance reviews are typically written based on time spent with a retail review copy or review key for the game that is provided by its publisher.