Theres a sense of inevitability about the opening chapter of The Walking Dead: Michonne: In Too Deep; theres going to be well-meaning moments of necessity or kindness thats perverted into a desperate scramble for survival. During which, choices you make are going to get someone youre supposed to care about killed. Its inevitable, and thats becoming an issue because its a scenario thats been played out so many times, its started to become a parody of itself. It wasnt a problem in Season One, while the foundation was still fresh and you still found yourself surprised by the barbarity of the world around you. It was cleverly sidestepped for the most part in Season Two because the person making the hard choices is the eleven year old girl youd spent the entirety of the previous season trying to protect. Michonne isnt anywhere near as vulnerable a protagonist as Clementine is; shes a zombie homicide factory, not a pre-teen having to surprise us with her adaptability. If this tale is going to go anywhere, its going to need to capitalise on its war waged against Michonnes faltering sanity.

The opening scene has her flicking in and out of reality, in a stretch of woodland crawling with the undead. Theyre not that big a threat; anyone familiar with the comics or the long-running T.V. series wont be surprised with the relative ease she puts the walkers down with. But she keeps seeing things that shouldnt be there. An area of flatland becomes a living room; a campfire becomes a burning couch pillow. There are children that shouldnt exist anymore staring at her. The location flickers from the woods she stands in to the home shes trying to forget. A series of quick time events showcase just how easily shes able to dispatches the shuffling corpses keen to munch on her face; theyre an annoyance rather than a risk. Michonnes greatest peril is herself. The first real decision you have to make is after she puts a loaded gun to her head; does she pull the trigger or resist? 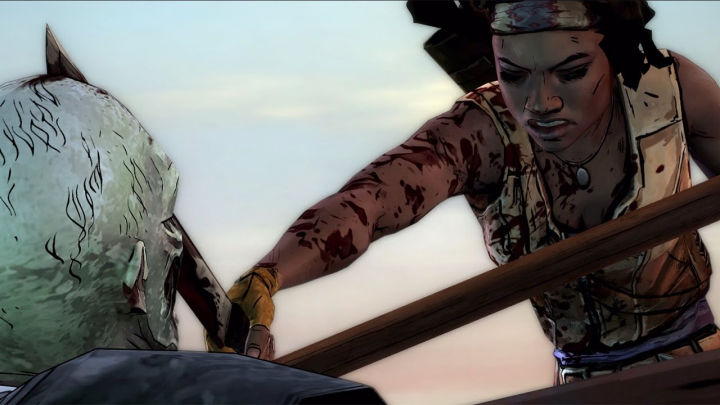 The games sporadic highlights all centre around Michonnes unstable grasp on reality. Sometimes things appear that have no right to, but theyre not foreshadowed clumsily; theyre just there. Ghosts of the past constantly sneak into the real world and Michonnes constant struggle to starve off her PTSD is wisely highlighted and opportunely executed. This is a bonus, because the rest of the chapter is almost crushingly routine. Her counterpoint in todays adventure is Pete  the optimistic captain of the boat she currently lives on that acts as a naïve foil to the leads inevitable sense of foreboding gloom. Of course, somethings going to happen that forces them to come ashore and, of course, what seemed like a simple quest will snowball into disaster.


In Too Deep then introduces new cast members in a rapid shuffle that either are not given enough time or are not developed well enough for you to actually care about. Theres twists present in the overly-simple tale, but as they rely on your forming quick bonds with people youll struggle to care about, they wont exhibit the emotional punch returning players are used to. The last third of the game feels condensed, rushing towards an obligatory cliff-hanger ending that hinges on choosing the fate of someone youve not had the chance to form an opinion of. I think In Too Deep wants to use their sporadic screen time to mark them as someone struggling to swallow their morals in exchange for safety. They just came across as whiney and annoying to me. 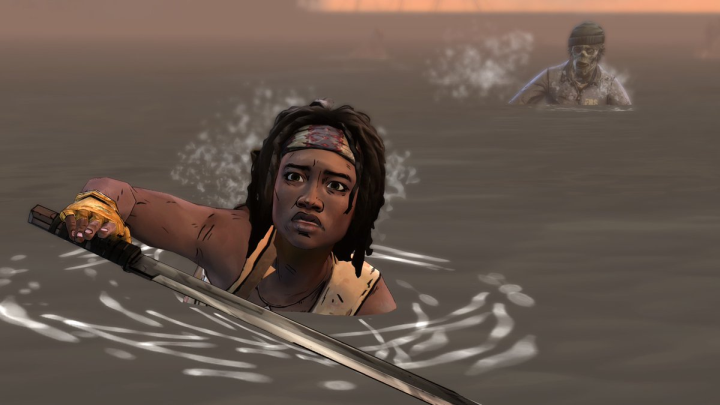 Its all set-up and no strike, which is a crime previous titles have been guilty of, but they rarely suffered at the hands of such damning compression. You were purposefully given at least some chance to get to know the people you were about to unwillingly damn. Michonnes entry into Telltales gaming catalogue is only three chapters long, half that of the main releases and that so much is stomped flat to save time is telling. Its a very ordinary start, somewhat saved by how it showcases Michonnes clear mental issues. I find myself hoping that a character I like will lose her mind more and more as the series progresses; it might be the only way to save it.

If you enjoyed this The Walking Dead: Michonne - Episode 1: In Too Deep review, you're encouraged to discuss it with the author and with other members of the site's community. If you don't already have an HonestGamers account, you can sign up for one in a snap. Thank you for reading!

© 1998-2020 HonestGamers
None of the material contained within this site may be reproduced in any conceivable fashion without permission from the author(s) of said material. This site is not sponsored or endorsed by Nintendo, Sega, Sony, Microsoft, or any other such party. The Walking Dead: Michonne - Episode 1: In Too Deep is a registered trademark of its copyright holder. This site makes no claim to The Walking Dead: Michonne - Episode 1: In Too Deep, its characters, screenshots, artwork, music, or any intellectual property contained within. Opinions expressed on this site do not necessarily represent the opinion of site staff or sponsors. Staff and freelance reviews are typically written based on time spent with a retail review copy or review key for the game that is provided by its publisher.