As I ponder more and more about it, I get stronger in my belief that admitting Streets of Rage into the Sega 3D Classics lineup was a colossal waste of time for consumers...

It's an extremely generic copy of Final Fight that has almost no variety, and because of that, brawling its eight stages is an amazing bore. SoR's one main standout is its dance soundtrack by composer Yuzo Koshiro, which was unique for its time in the video game medium. The other positive is the two-player co-op, something that Sega Genesis owners were able to gloat over Super Nintendo players who only had a one-player port of Final Fight. But that's about it in terms of praise. M2's excuse in an interview basically amounts to "It was quick and easy!", and it even shows with sloppy extra content; defeat every enemy with one hit? Consider me sold! And if you want to do a local, two-player session, the second person also needs a copy of the game on their portable.

M2 should've just started with Streets of Rage 2. At least with the second game, you get a standard generic copy of Final Fight with a tiny bit of variety, and because of that, brawling through its eight stages feel like a chore than a bore. Yuzo Koshiro also eclipsed his previous efforts, delivering an even catchier dance soundtrack with tighter beats and a faster rhythm. And once again, Genesis owners were able to brag about a two-player co-op mode, because Final Fight 2 wouldn't come out for another seven or so months. Sadly, the same local set-up is also required for the 3DS version... 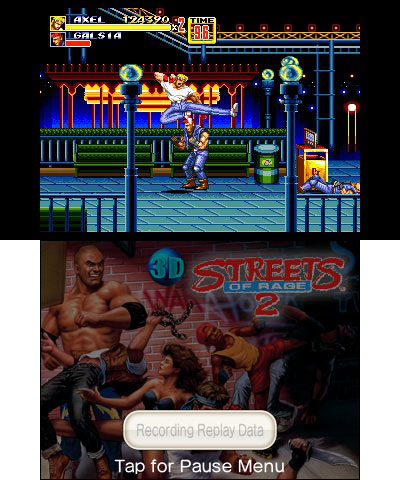 No seriously, considering I haven't played this sequel in forever, I was genuinely shocked how similar this release was to its predecessor when I played the M2 conversions back to back. For example, a ton of locations have a strong feeling of deja vu for my discomfort. Street sections are a given, but then you have another factory level, another boat level, and another bridge level. Though, when the game decides it doesn't want to redo levels, it actually does a decent, if a bit weird, job of showing variation: there's an amusement park... which has an alien attraction that physically hurts people with exploding pods, and a baseball stadium... that has a secret, underground fighting ring.

To focus a bit more on the positives, combat is a tad more involved, because the AI actually attempts to go in for the kill more times than not; the first game has a nasty habit of making most enemies back away whenever you try approaching one, to the point of moving off screen constantly. Regrettably, the hilarious police car bazooka attack is gone from this sequel, but in its absence are various, life-draining, special attacks for each character, most needing some motion inputs to perform. And as you wreak the opposition, from returning foes such as mohawk criminals in raincoats (?) and whip-wielding dominatrices, the sound effects exceed at giving off hearty, bone-crunching noises, as if you're nonchalantly destroying solid material. Which happens, too.

But, as stated earlier, Streets of Rage 2 is nothing more than a remake of a title that came out a year prior, despite these changes. Is that such a bad thing? Well, if the predecessor was an enjoyable game, then no. However, the original Streets of Rage is such a bland beat'em up, since it refused to do anything fun or interesting with its core structure of moving forward and attacking people. It's borderline offensive the Sega dev team thought they could get away with repeating this "nothing" design with changes that have minimal impact on gameplay. Like, the special attacks could've been cooler if you had to find unique ways to counter enemy attacks, but sadly there's only one enemy I'm aware of that breaks your moves; so, they're simply just another method of attacking.

One would think M2 might've put more effort into the extras with this port, considering the lack of worthwhile content they added into the predecessor. Unfortunately, M2 has had an incredible hit/miss streak concerning exclusive bonuses, and it continues with a miss here. The one-hit kill option carried over in this conversion, but in a slightly modified format, as you now need to knock enemies to the ground to drain them of all their health. Oh, and you get the actual one-hit kill option once you beat the game. I... okay??? There's another mode called Rage Relay, which might be the most asinine and forced thing I've seen in a Sega 3D Classics game yet. With this activated, you have to play on four lives (continues included), and those four lives are the four protagonists, which you can choose the order of during the selection screen process. As dumb as it sounds. 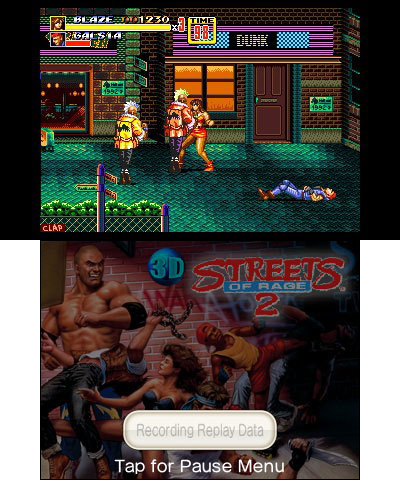 Was this one of the best beat'em ups on the Sega Genesis? Easily. It didn't hurt that Streets of Rage 2 has a solid soundtrack and some of the best graphics on the system, showcasing colorful backdrops and giant sprite characters with surprising detail. The game was a solid example that, in the hands of talented sprite artists, you could make great-looking games on the Genesis. However, since the console had a surprising lack of decent beat'em ups to begin with, proclaiming Streets of Rage 2 as one of the best isn't saying a whole lot. The port job doesn't do it any favors, either; it unintentionally makes a mockery of the game with laughable bonuses, 3D capabilities that seem to be lacking depth in comparison to the first, and the hassle of needing two copies just to play co-op.

If you want nostalgia that's been tainted, then go ahead and get it. But if you want an actual great game to download on the eShop, there's tons of solid Sega 3D Classics to choose from, not to mention they showcase M2's efforts in a better light.
2/5

If you enjoyed this 3D Streets of Rage 2 review, you're encouraged to discuss it with the author and with other members of the site's community. If you don't already have an HonestGamers account, you can sign up for one in a snap. Thank you for reading!

© 1998-2020 HonestGamers
None of the material contained within this site may be reproduced in any conceivable fashion without permission from the author(s) of said material. This site is not sponsored or endorsed by Nintendo, Sega, Sony, Microsoft, or any other such party. 3D Streets of Rage 2 is a registered trademark of its copyright holder. This site makes no claim to 3D Streets of Rage 2, its characters, screenshots, artwork, music, or any intellectual property contained within. Opinions expressed on this site do not necessarily represent the opinion of site staff or sponsors. Staff and freelance reviews are typically written based on time spent with a retail review copy or review key for the game that is provided by its publisher.