Every year since Call of Duty 4: Modern Warfare arrived in 2007 (yes, it really did release that long ago), I've played and enjoyed another installment in the Call of Duty series. Now, here I am in 2016, having just finished up with Call of Duty: Black Ops III, and guess what? Once again, I found a lot to enjoy. There was also some stuff that I didn't particularly care for, however.

Although the edges have somewhat blurred this time around, the game is roughly divided into three familiar modes: campaign, multiplayer, and zombies. I know a lot of people go straight to the multiplayer modes, but I always like to start with the single-player campaign (which actually isn't even available to those who purchase the Xbox 360 or PlayStation 3 versions of the game). Doing so gives me a good chance to adapt to any new play mechanics before I let strangers slaughter me in team deathmatch. 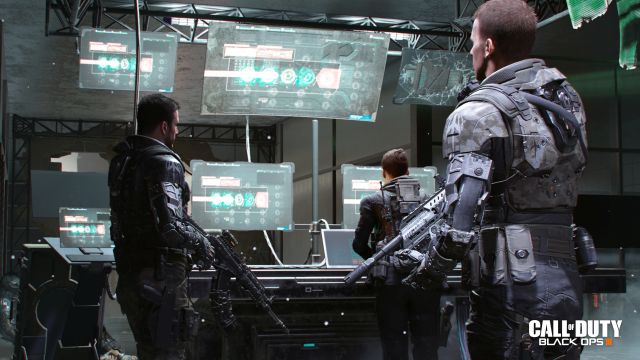 In Black Ops III, the story unfolds decades into the future, in high-tech environments around the globe. You wear a fancy suit not terribly unlike those featured in last year's Advanced Warfare. This time around, you're also equipped with "DNI" that lets you bring unique weaponry to bear once you unlock it. You can send out a swarm of flying pods and unleash them on enemy units, for instance, or quickly hack turrets and turn them against your foes, or even zip forward with a powerful punch that destroys robots. There are a lot of robots to defeat in this dystopia. So many, many robots.

DNI is a focal point of the game's plot, so you gain access to it very near to the start of the adventure. That particular development feels like the most obvious twist in the history of obvious twists, and a lot of what follows for the campaign's first third or so is similarly predictable. Then things suddenly get very weird as the writers take the story off the rails. You're suddenly forced to ponder who your true allies are and what secret you might be about to uncover, if you can just manage to live long enough.

Once the plot really got going, I was typically anxious to see what would happen next. Some of the twists allow the developers to explore a surprisingly wide variety of different locations, time periods, and even twists on reality while still producing a mostly cohesive narrative. You follow a core group of just three primary heroes, which makes it easier to keep things straight (though some events near the very end can definitely mess with your head). The problem I had is that although I enjoyed seeing what came next, playing through the stages to trigger the next tidbit all too often felt like a chore. I almost wished I were watching a movie instead. 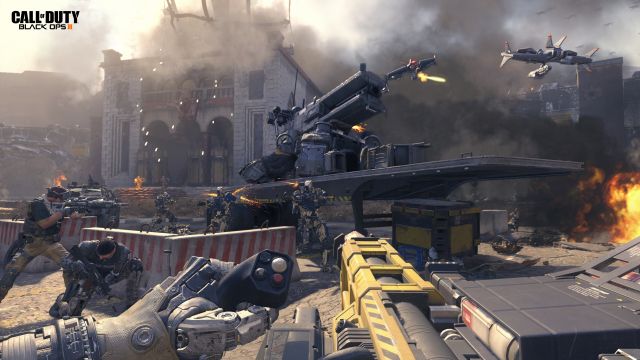 Mission length certainly didn't help. There are only 11 missions, but they can last a really long while (particularly if you're not especially gifted or are playing on higher difficulty settings). I played on the default setting and quickly reached the conclusion that this is the hardest Call of Duty game produced during the last decade or so. I was sometimes reluctant to tackle a new mission, simply because I knew it might take longer to clear than I had time left to play. Some missions felt like they contained the content of three separate missions, and I wished the developers broke them up a bit to provide more convenient stopping points (though in their defense, you can resume from a checkpoint even in the middle of a mission).

Speaking of checkpoints, I'm not sure those always trigger when they're supposed to. A lot of times, they would come along frequently enough that I didn't have to worry overly much about losing much progress if I ran into a nasty surprise. In other cases, though, I kept watching for an indicator that never came, even after a challenging battle with a tank and surrounding rooftops lined by snipers. I survived that hazard, then kept going and took out a bunch more soldiers, and then I finally died. When I resumed, I was back on the wrong side of that pesky tank. And don't even get me started on how many mechs you're supposed to destroy by the campaign's end. If you ask me, every such battle after the first one is just filler.

My suspicion is that Black Ops III wasn't really built with people like me in mind, though. After all, you can play with friends in any available mode, including the campaign. I had a friend come over and we went through one of the early missions together, on local split screen. It was much easier overall. Our worst enemy was the limited screen real estate (though I do have a large set), but you can eliminate that handicap by playing online or by setting up a LAN party. A lot of mission objectives and even the atypically expansive maps suggest that Call of Duty simply isn't intended for loners anymore. I did clear the campaign all by my myself, and then I tested out the Nightmare mode (which presents a new take on the story with missions presented in a different order and with a variety of alterations), but it was no easy feat. 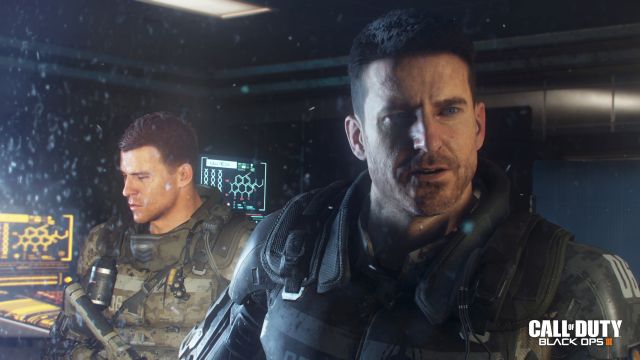 Once I'd had my fill of the campaign, I turned next to the zombies mode. I did so out of a sense of obligation, not because I honestly expected to have a good time. Frankly, I'm getting sick of reanimated corpses and their expanding role in the video game medium. Treyarch is one of the pioneers, though, so I was willing to cut the game some slack.

I'm glad I did, too, because the zombies mode is actually quite cool. When you first play, you're treated to a brief series of clips devoted to each of four characters (one of them voiced by Jeff Goldblum, who is just one of the familiar vocal talents involved). Those anti-heroes all do terrible things and think they got away with it, but then they wake up and find themselves trapped in a mysterious alleyway that is suddenly being overrun by zombies and assorted other creatures with similar hygiene. In order to survive the night, they'll have to perform tasks outlined by a mysterious voice. The area they can explore expands gradually. You earn points that you can spend to open gates, or to beef up your firepower.

Like the campaign, the zombies mode also lets you play on local split-screen, or you can head online. I vastly preferred the latter option, since it provided a clearer view of the action. It's also easier to find three strangers on the Internet, unless you have an abundance of local friends (which I do not). I spent several hours in the mode and started unlocking upgrades and such, and it wouldn't surprise me if I wind up spending hours more at some point in the future. It's absurdly addictive, which is something I never thought I'd say. 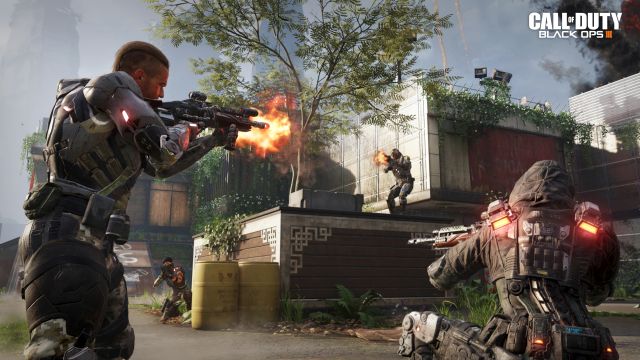 I had to move on, though, and my next stop was the dedicated multiplayer mode. When I first started playing, I wasn't impressed. It seemed like I couldn't stay alive more than 15 or 20 seconds at a time before someone I didn't even see would hit me with a headshot. Then I had to watch a kill cam of my character drunkenly wandering around the arena, every bit as vulnerable as a fish in a barrel. I kept at it, though, and gradually began to improve as the hours wore on and I grew accustomed to the maps and some of the new mechanics.

There were a few things I especially liked about the maps this time around. One is their vertical nature. There are several that allow you to run around on rooftops, for instance. You can leap over gaps, run along signs (carefully, lest you take a fatal tumble to the street far below) and walls, or climb up to higher terraces. There also are plenty of places to find cover, and multiple routes through nearly every room, so that most maps feel more compact than I'm used to while still allowing snipers to do their thing. Admittedly, I'm no veteran where Call of Duty multiplayer is concerned and have never even bothered to prestige, but a lot of these maps really grew on me. With the exception of Metro, there wasn't one I ever dreaded seeing when it popped up as a potential next destination in the lobby between matches.

This time around, the game also introduces the concept of the "Specialist," which sounds neat in theory but didn't prove relevant for me. A specialist is basically just a soldier of a particular class, but your associated ability isn't available in a round until you've messed around a bit and it won't stick with you if you die (making it virtually useless for a total scrub such as myself who rarely even manages a kill/death ratio of 1:1 and almost never kills more than 2 or 3 enemies before going down in a blaze of not-quite-glory). One ability finds the soldier shooting a charged shot from a bow. Another lets a buffer fellow drive spikes into the ground and produces a shockwave. You get to unlock one specialist from the start, and can quickly access a few more of them before level requirements delay additional choices for a few hours. As you gain points, you can also use them to customize your gun loadout to suit your preferences. Regularly using a particular weapon will make more choices available over time, but you can only have so many stocks and scopes in place at once.

When I reflect on my overall experience with Call of Duty: Black Ops III, I'm forced to conclude that it is Treyarch's most ambitious offering to date. The standard campaign, the multi-player, and the zombies modes all seem to be trying harder than ever before to offer something for players with a variety of interests and backgrounds, while still clinging to a lot of those elements that by now you likely associate with the long-running series. Though the game overall fails to meaningfully evolve the franchise and in my opinion hasn't found a way to capture lightning in a bottle the way the first two Modern Warfare titles did the better part of a decade ago, it should still keep fans entertained until the next entry inevitably arrives a year or so from now.
4/5

If you enjoyed this Call of Duty: Black Ops III review, you're encouraged to discuss it with the author and with other members of the site's community. If you don't already have an HonestGamers account, you can sign up for one in a snap. Thank you for reading!

© 1998-2020 HonestGamers
None of the material contained within this site may be reproduced in any conceivable fashion without permission from the author(s) of said material. This site is not sponsored or endorsed by Nintendo, Sega, Sony, Microsoft, or any other such party. Call of Duty: Black Ops III is a registered trademark of its copyright holder. This site makes no claim to Call of Duty: Black Ops III, its characters, screenshots, artwork, music, or any intellectual property contained within. Opinions expressed on this site do not necessarily represent the opinion of site staff or sponsors. Staff and freelance reviews are typically written based on time spent with a retail review copy or review key for the game that is provided by its publisher.