There are moments in Bedlam that just make me want to cry. Or scream. Or rage. Or invent new curses because the 1,400 years the English language has had to evolve still have yet to produce words strong enough to reflect my frustration and hate. There are moments of crippling disaster when you can see your entire campaign's work undone in one bad decision or unforeseen circumstance. And it could be so many things; Bedlam insists you keep multiple balls in the air, and dropping a single one means youre screwed. And now youre dead. Game over. Start again.

Permadeath reigns supreme in the Judge Dredd-esque wastelands that Bedlam calls home, where youre tasked with driving a hulking Dozer full of passengers as you search for a fabled hidden city somewhere across the border. Until you run out of fuel or food and have to decide if you should maybe mangle some of your passengers into new resources. Or you roll into a huge spiny mutant who belches acid and one-hit kills members of your defense force. Or you decide to check out that crashed satellite and rogue AI robots blow your head clean off with sniper rifles. Or you explore that cave (why would you do that?) and never come out again. Or, desperate for food, you steal some from beneath a tribute statue and, oh god, why are there so many marauders and how have they got you surrounded already?

Bedlam is going to draw a lot of comparisons to some pre-established games. Its roguelike foundations that have you plotting a course through the wastelands picking up resources as you go will automatically remind people of FTL. The caravan full of people you will mostly fail to keep alive is highly reminiscent of The Banner Saga. Its similar to both of these games while, at the same time, being completely different. The mission is to get from A to B, much like in FTL (just without a pursuing force hurrying your steps), but real-time space dogfights have been replaced with turn-based combat. Find a threat, and youre free to dispatch your defenders to try and neutralise it. Youll be sending them out to die. 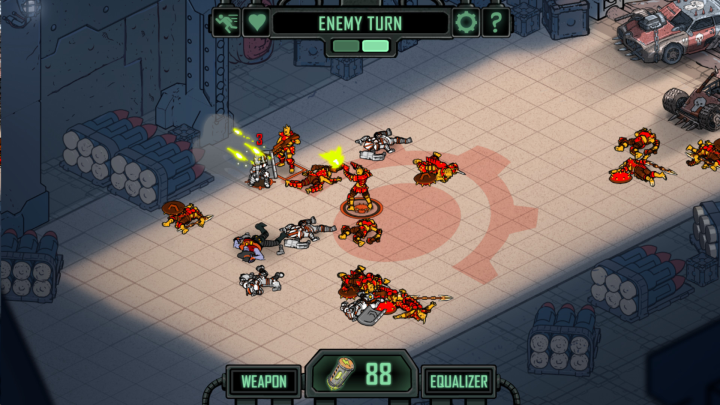 It wont always be this way; Bedlam is hardest at the start, when youre still struggling to make sense of the game and your raw recruits lack the experience to last very long. And so theyll die in droves while the select few that squeeze through each battle will level up into something usable. That their positioning at the start of each fight is randomised is sometimes the bullet to the back of your head before things even start; you might have fragile snipers standing alone in a clutch of enemies while your much hardier frontliners, equipped with a power mace and shield, are stuck worthlessly right at the back of the grid. Sometimes you'll be okay but other times youre forced to start a fight knowing that youre going to lose one of your finite number of troops and theres exactly nothing you can do about it. Which really stings when that sniper locked out there in no mans land is that same guy youve been slowly leveling for the last handful of fights.

You could try and solve this by firing off a volley of the Dozers weapons at the expense of precious energy cells (which you can also spend making upgrades on the Dozer, saving resources like fuel and meat), but falling back is rarely an option. No matter how many troops you drop onto the battlefield, they share an action points well of two moves per turn. Bedlam will actively reward you for selecting fewer troops than suggested and, should you reach your mid-game stride, doing so is perfectly viable. You can recruit epic characters out in the wasteland so long as you can defeat them first, driving you into difficult battles because the reward of success outweighs the risk of defeat. The combination of these brutes alongside your now veteran defenders, coupled with any possible new Dozer weapons you might have picked up along the way will slowly start to make Bedlam feel manageable. Until you run out of fuel. Or food. Or both. Or those nomads you invited onboard turn out to be assassins and attack you from the inside out. Or gas starts leaking into the living compartments and melts your passengers. 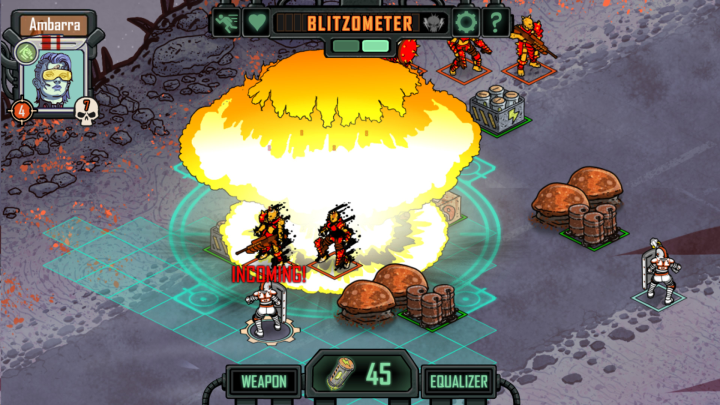 These are risks that need to be taken, because being strong enough to hold your own is only one of your concerns. You need to explore the wasteland in order to scavenge resources, but the wastelands arent keen on being scavenged. Theyre full of awful mutant monsters and people whod be quite excited to wear your head as a hat. Not every group of people you come across is going to offer recruitable characters or goods to trade; sometimes theyll just want to bludgeon you to death and steal your stuff. Rarely will you be in a position where you can just drive past these instances, because you could always use some more fuel, or top up your power supply, and that dodgy fellow waving you down might just be the answer to that. Or hes a diversion and youre about to be ambushed.

Death finds you a lot of ways in Bedlam. Sometimes it finds you some way into an epic four-part boss fight, as you try and down the wasteland king. Other times it comes fifteen minutes after you start wandering about and realize you've bitten off more than you can chew. You need to build success off a mountain of your own broken corpses, learn where you went wrong and hope youre not forced into making the same mistake again. Bedlam is a difficult game and, even if you come in ready for that, you still need to be prepared to cry now and then. Or scream. Or rage. Or all the above.

If you enjoyed this Skyshine's Bedlam review, you're encouraged to discuss it with the author and with other members of the site's community. If you don't already have an HonestGamers account, you can sign up for one in a snap. Thank you for reading!

© 1998-2021 HonestGamers
None of the material contained within this site may be reproduced in any conceivable fashion without permission from the author(s) of said material. This site is not sponsored or endorsed by Nintendo, Sega, Sony, Microsoft, or any other such party. Skyshine's Bedlam is a registered trademark of its copyright holder. This site makes no claim to Skyshine's Bedlam, its characters, screenshots, artwork, music, or any intellectual property contained within. Opinions expressed on this site do not necessarily represent the opinion of site staff or sponsors. Staff and freelance reviews are typically written based on time spent with a retail review copy or review key for the game that is provided by its publisher.