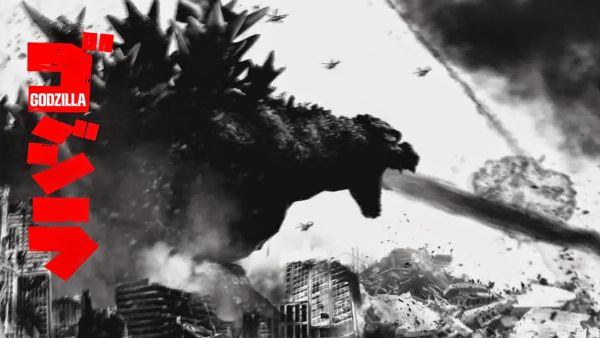 It usually isn't difficult to spot an utterly horrid game. Most abysmal titles reveal a complete absence of quality within the first few minutes. In recent memory, though, I can think of only one product that started off as mostly inoffensive and from there soured to the point of absolute repugnance: Godzilla on PlayStation 4.

Before you mount the old "Well, you've got to be a Godzilla fan to appreciate this" defense, understand that I am a Godzilla fan. I have been since my toddler years, but still I'm displeased with this particular take on the IP.

Your first impression might be that Godzilla is a half-baked action title along the lines of Rampage. You enter a Japanese city, smash its buildings, lay waste to its massive generators, and collect "G-Energy" to grow. Such destruction would be terrific if the game felt or looked contemporary, but watching each tower shatter into nondescript bits or melt into the ground hearkens back to the Gamecube era. In some ways, you feel like you're playing Destroy All Monsters Melee, but with HD visuals and a huge mechanical tweak. Things get cheesier when you watch a monster's limbs pass harmlessly through a building, suggesting that proper collision detection wasn't a priority during development. Such an approach might've been acceptable circa 2002, but nowadays, watching a monster wreck a building by swiping at the air above it reminds a person of production values that belong in a digital-only budget title, not a full priced retail release.

The JSDF unloads myriad shells in an act of homeland defense while you go to town on the buildings, but as in the movies, their efforts prove futile. Even when they increase the threat level and roll out the "big guns," projectiles just bounce off of you. Meanwhile, you're left practically uncontested while you button mash skyscrapers to death, acclimating yourself to a horribly counterintuitive control scheme as you go. Remember Left and Right on the analog stick? Well, forget about them, because they're useless now. Instead, you've got to maneuver Godzilla using the shoulder buttons, which cause him to slowly rotate. I'm sure some folks might read that and develop kaiju hard-ons in response, because the control scheme sounds like it could allow Godzilla to play like Giant Monster Simulator 2015. The only problem is that the beasts in the Toho films that inspired this game were much more mobile. That point sinks the notion that Godzilla is even a halfway decent simulator. Remember: this is the same Godzilla who executed a flying dropkick against Megalon, did a Michael Jordan-style high jump onto Megaguirus, and even boxed Gigan on an episode of "Zone Fighter." Here, though, Big G and his cohorts (even the more agile types like Jet Jaguar and Final Wars Gigan) all handle like tanks. This doesn't count as a faithful kaiju simulator any more than a rerelease of the NES Top Gun would count as a modern flight simulator.

Above all, though, Godzilla is a horrible fighting game. In every stage, a different monster from Godzilla's rogues gallery makes an appearance. Over time, the radioactive reptile is thus pitted against Mothra, Rodan, one of several versions of Mechagodzilla, Destoroyah, Hedorah, and a whole slew of other Toho-licensed names. Sadly, brawling with opposing kaiju is a slog that amounts to simply spamming your most effective means of offense (selected from a not-so impressive list of around five) and occasionally utilizing a breath attack until victory results. 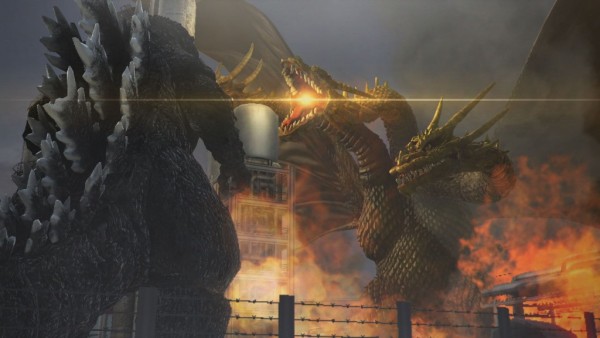 Godzilla's limitations become most apparent when you square off against multiple opponents. In my case, I battled Kiryu and the high tech warship Gotengo and got spanked hardcore. The biggest issue with the game's fighting mechanics is the way you lack an acceptable means of mitigating damage. Since the control response is so stiff, you can't out-maneuver your foes' attacks. When Kiryu let loose his entire ordinance, I had to take it like a champ, sometimes while Gotengo was busy firing a laser into my back. If Kiryu executed his spinning kick, I couldn't block it. Sure, I had the option to interrupt the blow with a super-powered area blast, but doing so consumes energy that requires time to replenish. In other words, skill can't save you from the game's handful of unfair onslaughts.

Unless you triumph by luck, your only recourse is to upgrade your character. After each playthrough, you acquire materials depending on which monsters you defeated, usually gaining one or two items per altercation. Typically, you finish the campaign and receive few of the goods you desire, forcing you to take on the whole bland experience from the top in hopes that you'll be fortunate enough to encounter the creature that possesses whatever you need. Unfortunately, I found that I could only beef up one stat or special attack on a given kaiju per playthrough, which is daunting indeed when you realize that the evolution chart is quite large.

All that I have described above merely qualifies as "injury," though. Next, get ready for the "insult." If the prospect of spending dozens of hours farming items just so you can pass a certain scuffle doesn't tickle your fancy, you can instead attempt a different mode of play. One of them, King of the Monsters mode, serves as a fighting tournament. Yeah, we've already been over how much brawling sucks in this game... Versus mode is-- wait, that's just multiplayer fighting, isn't it? Well, you could hit up the monster field guide to read about all of the behemoths featured in the game, except that dozens of sites online feature superior monster profiles so why bother? Diorama Mode allows you to use figures you've unlocked with materials acquired via Evolution Mode, along with settings you've nabbed by eradicating whole cities, to-- wait, that requires still more vapid hours spent in urban destruction, along with more item farming?

Yeah, every single mode of this game is worth skipping

Godzilla gets very little right. It's a tedious Rampage clone, combined with an underdeveloped simulation title, spliced with a broken fighter. That's three despicable games in one. There are, however, two elements the developers got right. The first is the character models, which look precisely like their counterparts. From the immensity of King Ghidorah's wings to the way the muck hangs from Hedorah, the kaiju visually look great at least until you see them in motion. The only other applause Godzilla gets from me is prompted by the use of composer Akira Ifukube's scores, which brings back fond memories of Toho's golden era. Sadly, neither of those two factors make Godzilla play any less like a shovelware title tricked out to look like homage to old school Godzilla. Perhaps someone forgot that they were marketing this title to Godzilla fans who also happen to be gamers, and merely focused on pleasing the former...
1/5

If you enjoyed this Godzilla review, you're encouraged to discuss it with the author and with other members of the site's community. If you don't already have an HonestGamers account, you can sign up for one in a snap. Thank you for reading!

© 1998-2020 HonestGamers
None of the material contained within this site may be reproduced in any conceivable fashion without permission from the author(s) of said material. This site is not sponsored or endorsed by Nintendo, Sega, Sony, Microsoft, or any other such party. Godzilla is a registered trademark of its copyright holder. This site makes no claim to Godzilla, its characters, screenshots, artwork, music, or any intellectual property contained within. Opinions expressed on this site do not necessarily represent the opinion of site staff or sponsors. Staff and freelance reviews are typically written based on time spent with a retail review copy or review key for the game that is provided by its publisher.