Despite knowing about the Zaxxon name for the better half of my gaming life, it was something I never bothered giving the time of day to. You might find that quite odd, especially when I tell you the name piqued my interest several times, first when I knew of Zaxxon 3D and its use of the Sega Master System's 3-D Glasses as a kid, and later when Sammy's Viewpoint and Zaxxon's Motherbase 2000 not only drew comparison to the 1982 game, but also to each other. Now that I think about it, I chalk this up purely to being nitpicky, since I pretty much judged the game from a distance with a screenshot or two, thinking it as just another typical shoot'em up. Though, after digging around a little bit about Zaxxon's historic importance, I was astonished that the game was home to a few firsts of the medium. The most significant one being the game credited as the first to use axonometric projection, or the isometric view as most know it as, hence the name Zaxxon. Get it? Zaxxonometric!

The view isn't just for show, either, as it's intentionally designed to be a challenge as you take your spacecraft through two asteroid fortresses that eventually lead to a showdown with the robotic menace known as Zaxxon. Now, the view alone for most of the game isn't what makes it difficult, but when you throw in the ability to change your plane's elevation with the help of a height meter, that's where things start getting tricky. With this added element, you need to fly over brick walls, through holes, and dive down to the surface where all the turrets, missile silos, and planes reside. But why risk moving below to score points when you can breeze above? Well, your craft has a constantly-draining fuel gauge, so you need to sink in order to destroy fuel tanks, and if you want extra lives, all the major points, like turrets and satellites, are on ground level. And for a final countermeasure, hovering at the top of a fortress for too long results in a sudden appearance of a homing missile shot from Zaxxon! 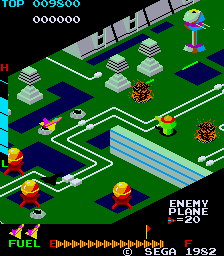 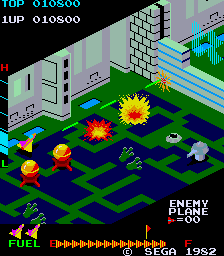 It all sounds very robust for such a "primitive" product, and if you were to play it for the first time, chances are the game is going to feel very overwhelming; not even a minute into Zaxxon, you're tasked with learning to use elevation sufficiently and quickly, dodge half a dozen missiles coming out of silos with the aid of your ground shadow (another innovation), dive while avoiding turrets aimed in your direction, and consciously be aware of your fuel. Make it to the second asteroid fortress, and be subjected to a series of holes you need to fly through with minimal timing. Determining the height may seem impossible, but there's an obvious trick that must be done, so it's a matter of how fast you can do it and how confident you are with points on the ground between the brief intervals.

Survive the two long stretches in the fortresses, outlive the encounter with Zaxxon, and you're back to the beginning. However, this time your fuel gauge dries quicker and certain obstacles make maneuvering a little tougher. When it comes down to it, the game is all about outpacing your eventual doom, raking up as many points as possible through isometric strips of impending doom. Though, the game has issues when it comes to, if you haven't guessed by now, positioning your height correctly, especially when it comes to aiming at specific objects. It's less of a problem in the fortresses, but becomes a complete mess in the space segment located between those fortresses, since opposing ship formations zoom in and out of different altitudes. I shouldn't have to tell you how frustrating this is, and it turns into a cluster when they start firing projectiles. Even once you have some solid practice with the game, that part is still a huge, unnecessary pain.

So, let's talk about Super Zaxxon. The reason it took this long to mention is because this follow-up is substantially identical to the original version, at least from a design perspective. Despite having recolored the structures from blue to green, remodeled some objects to look slightly different, and replaced the robotic Zaxxon with a cartoon-ish dragon Zaxxon, the layout of the fortress levels are the same. However, the tiny changes that were made does have an interesting impact on the game flow; the most immediately noticeable one being the increase in speed of the auto-scrolling, meaning you now have to weave in and out of danger with little to no reflex lag if you want to see anything beyond the first fortress. Another distinctive alteration has to do with the space segment, which has been swapped out for a tunnel area that forces all moving objects to stay at ground level. 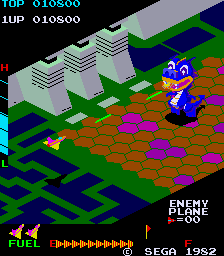 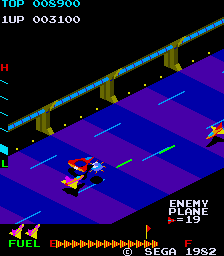 Now, the other reason I took so long to bring up Super Zaxxon is because all the things that made Zaxxon a unique title is instantly overshadowed by the extreme frustration of dealing with those two new additions. Super Zaxxon goes at such an unwarranted rapid pace to the point of being outside the realm of enjoyable, regardless of what one thought of the original version. If you've played even a bit of the first game, you can usually get past the starting fortress without a scratch in this edition, but the success rate of flying through the holes in the second fortress while collecting fuel is a very painful experience. That is... if you can make it over the tunnel section. You'd think having everything on a single plain would make it easier, but the tunnel somehow manages to be worse than space! The speed at which enemies move, combined with the weird angles they come at you from, together with the strange hit detection, as well as being in your face when spawning from a lost life, is absolutely infuriating...

It was not uncommon for arcade games to have expansions released shortly after, with such examples as Pong Doubles and Space Invaders Part II, not to mention Capcom taking it to the extreme in later decades; though, the intent of these revisions, if you take out the money equation, was to make a better product with some new additions, even if the improvements appear minor in some cases. If that's what the goal was when developing Super Zaxxon, then consider it a colossal failure, because it still amazes me that two simple adjustments could hurt a game's foundation so dramatically. I used to wonder why Super Zaxxon wasn't mentioned in the same breath as the original game, and how Zaxxon got a lot more love in the porting department throughout the years. Not anymore. Hell, I don't even talk about Super Zaxxon that much in this review!

If you enjoyed this Super Zaxxon review, you're encouraged to discuss it with the author and with other members of the site's community. If you don't already have an HonestGamers account, you can sign up for one in a snap. Thank you for reading!

© 1998-2020 HonestGamers
None of the material contained within this site may be reproduced in any conceivable fashion without permission from the author(s) of said material. This site is not sponsored or endorsed by Nintendo, Sega, Sony, Microsoft, or any other such party. Super Zaxxon is a registered trademark of its copyright holder. This site makes no claim to Super Zaxxon, its characters, screenshots, artwork, music, or any intellectual property contained within. Opinions expressed on this site do not necessarily represent the opinion of site staff or sponsors. Staff and freelance reviews are typically written based on time spent with a retail review copy or review key for the game that is provided by its publisher.