I've been a Mario Party fan since the ridiculously addictive first installment in the series released on the Nintendo 64, but these days I'm finding it increasingly difficult to maintain interest in the franchise. Part of the problem is the fact that lining up schedules among my group of adult friends has become so difficult. That's not Nintendo's fault, but when my buddies and I finally manage to assemble for some multi-player gaming and discover that Nintendo streamlined a lot of the fun out of the experience, well, that's hard to take.

Things most visibly started on a downhill path with the release of Mario Party 9. That's when someone in charge at Nintendo decided a new approach was in order, rather than a return to the fundamentals. The solution was to drop participants in a vehicle that then transports them around the board in a group, rather than letting them run around the board on branching paths. This revision was presumably meant to speed up the game's pacing, which had been brought almost to a crawl as each new sequel introduced time-consuming additions. I can appreciate the intent, but the end result felt too restrictive. 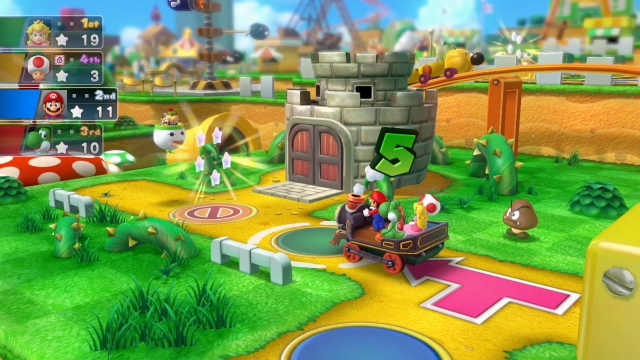 A year or two ago, I tried playing Mario Party 9 with my friends. We quickly grew bored of the experience and popped in Mario Party 8 instead, at which point we proceeded to have the good time we'd anticipated all along. More recently, I got together with those same friends and we decided to give Mario Party 10 our attention. Happily, the results were mostly favorable. The newest installment, though certainly not on par with the N64 and GameCube editions, is an encouraging step in the right direction. It simply lacks staying power.

In the basic party mode that lies at the core of the experience, players are once again deposited in a single vehicle. Each human or AI-controlled player hits spinning dice blocks to determine the turn order, and from there you all ride together along a path that leads toward the finish line. Your objective is to collect the most mini-stars along the way to the goal, typically by playing mini-games or by passing through star gates. Periodically, you have opportunities to grab dice blocks that let you modify your rolls. Suppose you're about to pass through a gate, but ahead of it there are a bunch of spaces that lead to penalties. In that case, you might want to roll two dice at once in hopes of skipping over them, or you may prefer to roll a single dice that potentially won't advance the vehicle at all. A nasty space typically only impacts whoever happens to be driving, which means that every competitive player's goal is to screw over his or her teammates except for sometimes. That's an interesting dynamic, and the courses are designed to facilitate some tense moments, but I still miss the freedom that was offered in the best of the first 8 console titles. 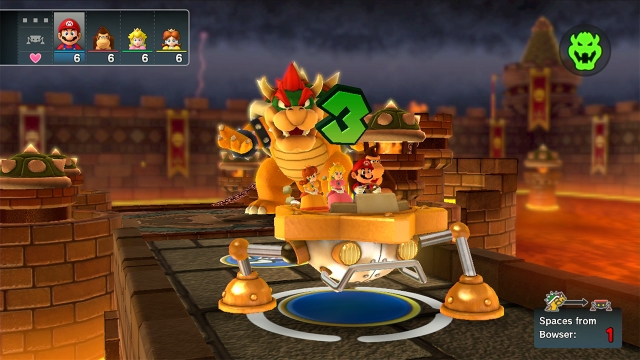 I also miss feeling like I'm playing a digital board game. In Mario Party 10, since you're no longer performing laps like in Monopoly, the experience feels more like a guided tour through a few points of note that will be roughly the same every time. On one board, for instance, you'll race along a series of airships and try to advance only when doing so leads you along safe spaces. On another, you must through a huge corridor while contriving to land in protected recesses to avoid Bowser's flames.

Speaking of Bowser, there's a new mode devoted to the infamous antagonist. One player uses the Wii U gamepad and messes with the other players, who quickly advance through a course and try to maintain a safe distance from the King of the Koopas. It's a nice diversion, but Bowser moves so quickly that the other players are at a real disadvantage, even with three of them rolling dice. A few low rolls practically guarantee that Bowser wins. There's not a lot of strategy to any of it.

Because the game released in 2015, it also features a mode that supports a number of Nintendo's popular amiibo characters. In this mode, which requires at least one compatible figurine from the Super Mario series (not the Smash Bros. run), players separately run laps around a square board with no branching paths. It's as close as Mario Party 10 ever gets to the classic design, but too limited to qualify as a return to form. There's also the cost to consider. If you want to join a multi-player game but you lack a compatible amiibo, you miss out on some helpful bonuses. It's like jumping into a game of Monopoly, but your friends collect $200 when they pass "Go" and you don't. 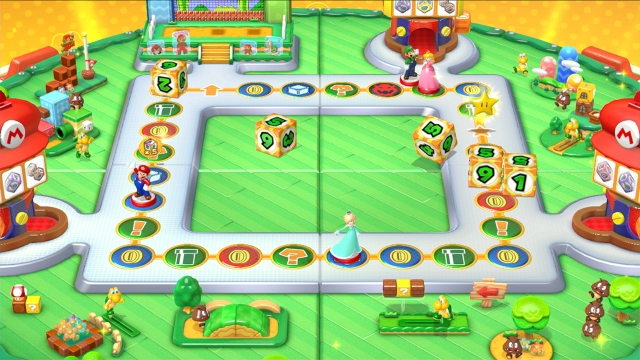 Whatever mode you try, Mario Party 10 at least boasts a decent selection of mini-games. They're standard by this point, slight variations on stuff you did in the previous titles, but that's expected. There are only so many ideas for unique events, after all. The ones offered here are attractively presented and easy to control, with goals that are simple to grasp. As usual, everyone can read instructions ahead of time, and you can practice before making a "real" attempt. There are a few stinkers that do come down almost entirely to luck, sure, but they're the exception.

As for unlockable content, there really should have been more of it. Mario Party 10 feels like the start of an experience, not the entirety. I can't help but wonder if someone thought more boards could be developed and added later as DLC. There are only around four proper boards available. There also are unlockable characters, but Spike and Toadette--though welcome--don't do enough to pad a roster that by today's standards feels surprisingly small. There's also the option to play any mini-games that you have already encountered, which is welcome but standard, and another event that lets you play through up to seven quick mini-game rounds before the winner is determined based on coin count.

Mario Party 10 is a competent new entry in the Mario Party franchise, but it doesn't seem to have been built to last. There aren't enough distinct boards, and although the new modes on offer seem cool on paper, they're executed half-heartedly. The amiibo integration in particular is too limited to justify the necessary expense. This newest Mario Party will certainly get the job done if you're desperate for something you haven't played before, but otherwise you'll be better served by returning to one of the classics.
3/5

If you enjoyed this Mario Party 10 review, you're encouraged to discuss it with the author and with other members of the site's community. If you don't already have an HonestGamers account, you can sign up for one in a snap. Thank you for reading!

© 1998-2020 HonestGamers
None of the material contained within this site may be reproduced in any conceivable fashion without permission from the author(s) of said material. This site is not sponsored or endorsed by Nintendo, Sega, Sony, Microsoft, or any other such party. Mario Party 10 is a registered trademark of its copyright holder. This site makes no claim to Mario Party 10, its characters, screenshots, artwork, music, or any intellectual property contained within. Opinions expressed on this site do not necessarily represent the opinion of site staff or sponsors. Staff and freelance reviews are typically written based on time spent with a retail review copy or review key for the game that is provided by its publisher.