Minigames, by virtue of their given title, are known to be very easy and short experiences, so by theory, it should be incredibly simple to crank out a collection of fun ones, right? Certain products seem to pull it off without much of a problem, like some of the Mario Party releases, or Sega's long-forgotten Action & Puzzle series, but unfortunately, the rest of the lot is filled with games whose quality constantly hover around the average-to-poor scale. Clearly, it requires some extra effort into making these enjoyable and sustainable, and they shouldn't be the exemption to the rule just because they're meant to be quick diversions; they need to be minor distractions in which people can and would jump back into when there's time to kill.

When I first played through Heart Beaten, a title which features women cruelly breaking up with a man at the start of each minigame, it apparently seemed to understand the replay concept mentioned above. I felt this minutes within when I entered the second minigame, titled Hammer, where the goal is to destroy the heart with a metaphoric hammer. There are several twists though, like the ground on which the heart is placed on changing height after each crush, not to mention the strict time limit, which ranges anywhere from seven seconds to five seconds depending on the game. Then there's the actual hammer, needing first to be stretched out horizontally, guessing how long it has to be in order to reach the heart. 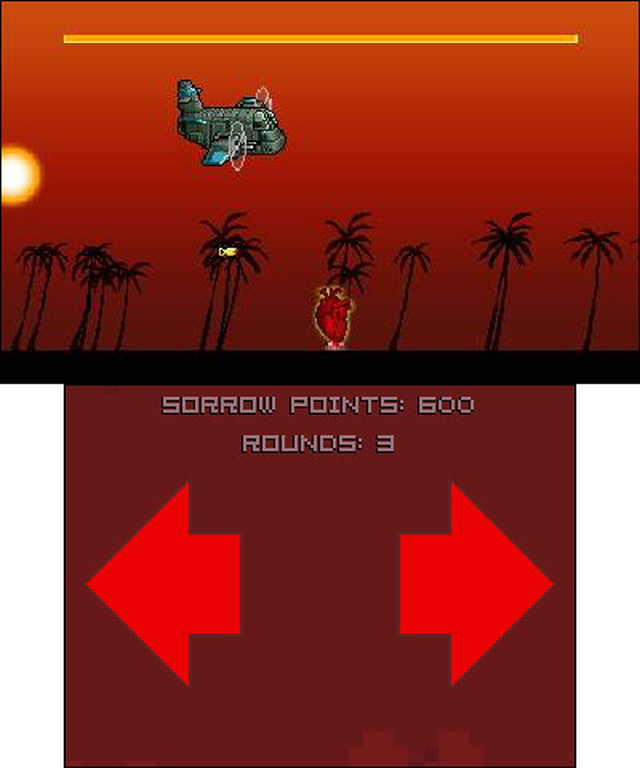 It's still absurdly simple after all those restrictions, but when working in unison, they lend a surprising amount of oldschool-style replay value to the minigame. They're constantly challenging the mind, forcing one to stay on alert, because if you become too complacent, it's suddenly over, not to mention there's no congratulations or special reward waiting for you at the end of each minigame. Shoot, when you exit a minigame after eventually losing, you're treated to a downbeat, funeral-esque tune and text explaining the guy spent years alone before opening up! Instead, the only pride you'll get out of this title is beating the bronze, silver, and gold high scores, and from there, constantly dethroning your own. So if you're the kind of gamer that loves unlocking tons of stuff after completing the minimalist of endeavors, then Heart Beaten is your worst nightmare.

More deceptively-easy minigames follow suit in testing your quick reflexes, such as Blend, tasking you to place plugs from a blender (guess what's inside?) into power outlets within the time limit. It starts out laughably mundane... until the blender starts mysteriously having more than one plug, each differing in color that need to be put in their matching outlets. Then there's Squash, where a heart flies through a series of machine presses, each engrained with a letter corresponding to a button on the 3DS; this one needs no further explanation other than the hearts start flying at faster speeds. Another minigame, Colors, is easily the most creative and mind-straining of the bunch, because you're presented with hearts of varying colors, and you must hit the one matching the text's color at the top of the screen in, of course, a firm time limit. The catch? The actual text is always the name of another color.

In essence, they're mimicking what a lot of good oldschool games were designed as: they start out easy, then quickly becoming both hard and addicting to the point where each lose is followed by, "One more try. Just one more!" This is usually then followed by a series of embarrassing failures, as fatigue eventually takes over, and from there, the true test of willpower begins! Which is why, with much regret, I can't extend this praise to the rest of Heart Beaten. As mentioned, the people behind this title clearly know how to make solid minigames, so it's bewildering that the remaining batch fails to match that quality. 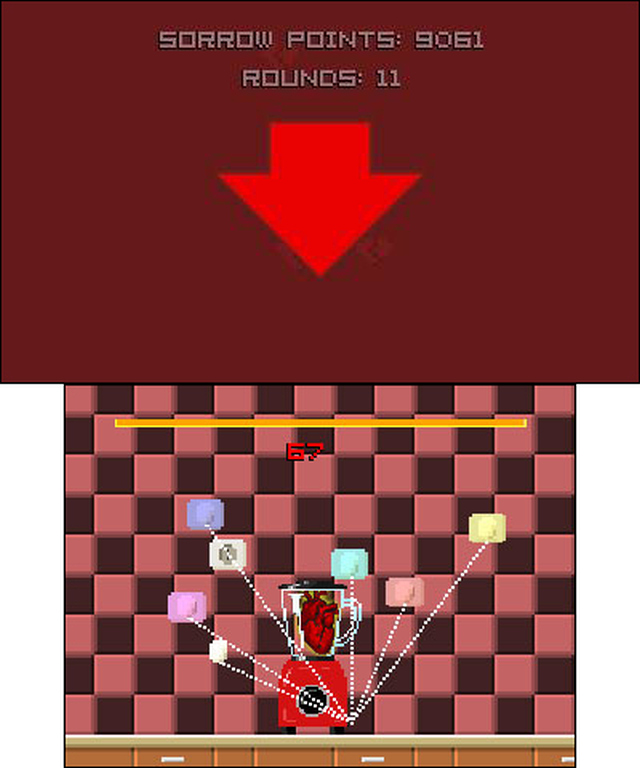 Interesting to note, the ones that fail to make an impact are usually micro versions of more fleshed-out games. Race, for instance, is an overhead car minigame that's very reminiscent of Spy Hunter, except now you just shift left and right to dodge oil spills while running over hearts. Woo. Also, S-Type is a horizontal shoot'em up where you continuously defeat a giant heart that shoots back at you in very predictable patterns. The heart eventually picks up the pace, but it still takes a long time before the minigame becomes a challenge. Further stretching the boundaries of the imagination comes Move, which tries very little to hid the fact that it's basically Duck Hunt and the bonus clay pigeon game mixed into one. Though, to be fair, it does throw more at you much quicker.

So, if you were keeping count, then so far I've mentioned seven minigames from Heart Beaten. Now get this: there's only 15 minigames. Worse, one of them is remixed two more times, and insultingly, it's not a good one to begin with, since you're just tapping the screen to hit a heart. Well... that now makes ten minigames mentioned. With this very odd divide in quality, the whole product comes off as if the people behind the game only had a few solid ideas, then went, "Okay, let's just toss in a few generic concepts to round out the package." I wasn't expecting some kind of masterpiece from a minigame compilation with a tiny price tag and a small library, but it could've been a nice, albeit average, title if a little more effort been put into it.
2/5

If you enjoyed this Heart Beaten review, you're encouraged to discuss it with the author and with other members of the site's community. If you don't already have an HonestGamers account, you can sign up for one in a snap. Thank you for reading!

© 1998-2020 HonestGamers
None of the material contained within this site may be reproduced in any conceivable fashion without permission from the author(s) of said material. This site is not sponsored or endorsed by Nintendo, Sega, Sony, Microsoft, or any other such party. Heart Beaten is a registered trademark of its copyright holder. This site makes no claim to Heart Beaten, its characters, screenshots, artwork, music, or any intellectual property contained within. Opinions expressed on this site do not necessarily represent the opinion of site staff or sponsors. Staff and freelance reviews are typically written based on time spent with a retail review copy or review key for the game that is provided by its publisher.