Amnesiac protagonists waking up in bleak post-apocalyptic worlds are nothing new in fiction, yet this is where Dead Synchronicity: Tomorrow Comes Today bases itself. The caravan Michael wakes in is filthy and in hefty disrepair, the bed he crawls out of discoloured with blood splatters, the mattress stained and spoilt. It's explained to him, by a very calm and polite man, that the world he once knew has been wiped away. He describes atrocities and moral degradation in the tone of someone recounting overdue library books. He tells you that you were found, broken and forgotten, in a ditch and that he and his family took you in. Perhaps you'll be fooled by his serene and matter-of-fact recounting on the death of the world and underestimate the situation. Then he locks you out of his room and leaves you to explore the world outside of the trailer. Your innocence won't last long.

There's a tear in the sky that wasn't there before. It appeared after The Great Wave wiped out the old world and replaced it with the new. There's no power, no security, no hope. A once powerful businessman huddles by a barrel fire, hacking up lungfuls of bile, guarding the shopping trolley full of his worldly possessions with his life. He'll chat with you to pass the time, but spits vile promises of your demise should you dare mess with his long worthless things. Sirens blare and a twisted parody of emergency medical aid arrives, shooting the healthy and dragging the ill, kicking and screaming, into their ambulances never to be seen again. Sometimes, violent static drips into existence and, in little bubbles of insanity, the entire world changes to something more broken, more desolate, before reality catches up and normality regains a foothold. 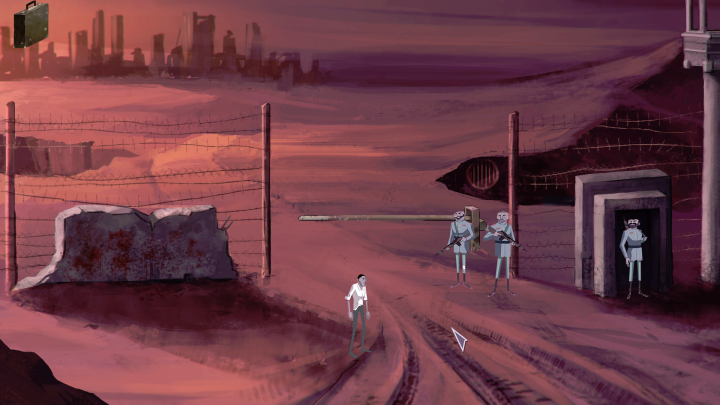 Dead Synchronicity pulls no punches when it comes to introducing you to its New World. The refugee camp you awake in is patrolled by half-mad thugs with assault rifles who take macabre pride in the blood-soaked wall the almost daily executions take place in front of. They crack a crazed half smile and tell you they've named it the "Wall of Shame" and it's where people who forget the command structure find their brain fragments drying. You're just a rat among the junk, and leaving the camp without risking a bullet to the back of the head isn't an option. Take another turn and, hidden beneath rusting cars and worthless electronics, a mentally ill girl too disturbed to understand what's going on is sold to anyone who has the money.

The New World is morally bankrupt, survived only by those willing to either swallow or abandon their humanity and has to be uncomfortably explored by a protagonist attempting to piece his life back together, trying to hold on to a set of values hes not even sure he used to subscribe. Michaels road to remembrance has him trading blood-soaked favours that scratch away at his past, revealing confusing snatches of jumbled information that do little but force him further down the rabbit hole. His quest to uncover his past may not be original, but it takes on an almost Noir-like feel when juxtaposed against the ferocious psychosis around him.

That Dead Synchronicity is genre-shockingly desolate is a sentiment I cant quite get behind; adventure games have been home to the horrific for as far back as I can remember. Harlan Ellisons adaptation of I Have No Mouth and I Must Scream has been around since 1995, while it was only a few years back that The Cat Lady reminded us how psychological horror is supposed to be done. Perhaps the kindest thing I can say about Tomorrow Comes Today is how its able to hang with such titles without undue effort and even manages to outperform them in instances. Rather than check off completed chapters or provide a pat on the back for reaching milestones, achievements are gained by applying irrelevant lateral adventure logic to situations or reference materials like the books and films that helped inspire the game. The solutions that do work force you down a grim and depressing path, but never stray into the ridiculous; youll sometimes not want to undertake in the actions that drive you forward, put youll just have to if you want to progress. 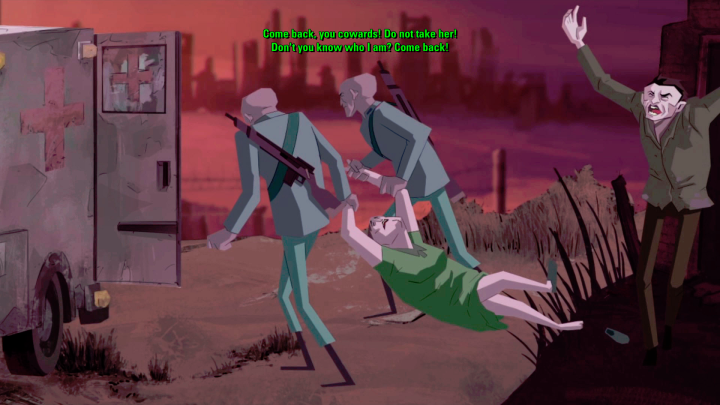 Its mercilessly captivating while it lasts, then its abruptly over, ending on an unsatisfying cliff-hanger, waiting to herald in a concluding chapter that probably shouldnt exist. Maybe its time to just accept this practise from Kickstarted adventure games, so common has it become, but Im just not quite able to swallow it yet. The fifth Broken Sword had to slice a game not meant for two parts in half to satisfy Kickstarter goals and, while that left a bad taste in the mouth of even the more adamant Revolution follower, the finished product turned out well enough to soothe over most bad feelings. Other projects like Broken Age are still in a limbo between absolution and outrage, which could very well be where Dead Synchronicity sadly finds itself. It took me around eight hours to battle my way through to the end (a respectable chunk of that spent trying to tick off the brilliantly abstract achievements) and now Im left hoping  rather than knowing  that Michaels suffering will find conclusion.

Its a weird place to be. You should play Dead Synchronicity: Tomorrow Comes Today. You should play it if youre an adventure fan, for the things it does right and the old ideas it smugly turns on their head. You should play it as a horror fan to see just how much youd be comfortable with should the world end tomorrow and atrocity becomes the new norm. Just, also, play it as an optimist and hope all the grotesque promise isnt duly squandered.
4/5

If you enjoyed this Dead Synchronicity: Tomorrow Comes Today review, you're encouraged to discuss it with the author and with other members of the site's community. If you don't already have an HonestGamers account, you can sign up for one in a snap. Thank you for reading!

© 1998-2020 HonestGamers
None of the material contained within this site may be reproduced in any conceivable fashion without permission from the author(s) of said material. This site is not sponsored or endorsed by Nintendo, Sega, Sony, Microsoft, or any other such party. Dead Synchronicity: Tomorrow Comes Today is a registered trademark of its copyright holder. This site makes no claim to Dead Synchronicity: Tomorrow Comes Today, its characters, screenshots, artwork, music, or any intellectual property contained within. Opinions expressed on this site do not necessarily represent the opinion of site staff or sponsors. Staff and freelance reviews are typically written based on time spent with a retail review copy or review key for the game that is provided by its publisher.