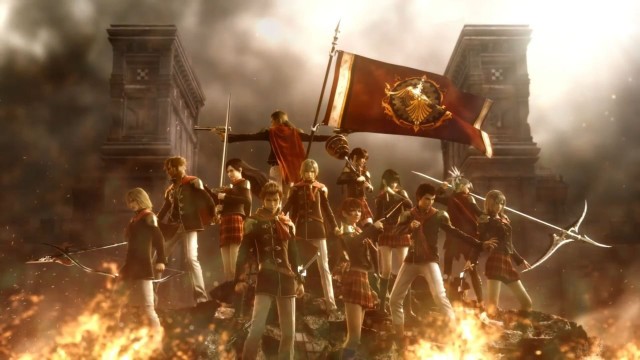 The once-triumphant Final Fantasy brand has been in an awfully confused state for a good decade now. Two of the last four mainline entries have been MMOs, and Square-Enix spent two whole side projects trying, unsuccessfully, to dig themselves out of the hole that they fell into with Final Fantasy XIII. At this point, you'd think a back-to-basics approach would please everyone. Yet Final Fantasy Type-0 HD, the long-overdue localization of the PSP title from 2011, is at its best when it's not trying to live up to its namesake. It works as the sort of fast-paced, tightly-controlled action romp that you'd half expect to see produced by Platinum Games. It's considerably less successful with the elements you'd usually associate with the series: the drama, the scope, the world-building, and the production values. Unfortunately, those elements get forced on you too often when all you want to do is throw cards at people.

It's hard to summarize Type-0's combat since there are, in effect, 14 different ways to play it. The plot centers on a group of SeeD-esque cadets at an elite military academy. They appear to be combat prodigies, as evidenced during the opening sequence when they play a key role in driving off an invading force, and are quickly employed to do their government's nasty work, leading battles and infiltrating enemy strongholds. Each of the students  a dozen original classmates and two transfers  are playable, and each wields a different weapon and thus invites a unique style of play.

Many of them fall into familiar categories, of course. There are two gunners and one archer, while the melee-centric students have predictable traits relative to their chosen weapons. The swordmasters deal quick strikes while the mace-wielder delivers hard, heavy blows. The woman with the whip can unleash wide attacks while the spearman makes pointed, deliberate strikes. Square-Enix gets goofy with a couple of them, naturally; the main character (or, at least, the guy on the cover) throws playing cards at people, while another girl attacks with musical notes. No, seriously. Her primary method of attack is to trod around playing the flute like she's doing the Bremen Mask march. 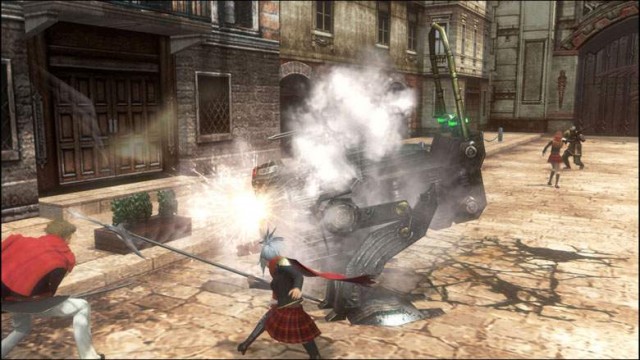 A lid for every pot, I guess, and Type-0's wide range of play styles seems like an overwhelming amount of learning to do, especially when figuring in each character's extensive skill trees. You'll develop favorites, though, and at least the game lets you settle into a groove, right?

Well, no, and that's kind of the cool part. When your character dies in Type-0, that's it. He or she is out for the remainder of the mission. You can swap cadets at any time, and you'll need to do that whenever you fall, since that cadet won't be available again until the next level. Over the first couple of hours, I grew quite comfortable with Ace, the card guy. I got into a consistent pattern of throwing up magic barriers, volleying cards at enemy soldiers and then letting loose a few randomized buffs whenever my AP racked up. When he died for the first time, suddenly I was forced, on the spot, to familiarize myself with an entirely new moveset and carry out the remainder of the mission with it.

So as overwhelming as it may seem to be given 14 vastly different playable characters all at once, the sharp difficulty and no-respawn rule make it impossible to get far in Type-0 without getting to know the cast very well and keeping them all in good shape. The game's checkpoints are extremely infrequent, and I have to believe that this was intentional, to dissuade players from simply rebooting saves whenever their favorite cadets die. Type-0 is full of satisfyingly tense (and usually non-scripted) moments in which things do not go according to plan and you're forced to do the best you can with what you have. The controls are universal  every student has one basic attack, two spells and a defensive move  so being pulled outside of your comfort zone is always a hurdle that can be overcome.

It doesn't really play out like traditional Final Fantasy. Mid-mission, it feels less like a JRPG and more like a character action game, whizzing you fluidly from one encounter to the next with several showy set pieces and boss battles per level. There's a much higher demand for raw, physical skill than is expected in most Final Fantasy titles, particularly when it comes to the risk-and-reward counter system, which involves players carefully studying and reacting to enemy movements. In peak form, it's exhilarating stuff, probably the most outright thrilling that any game in this series has ever been. 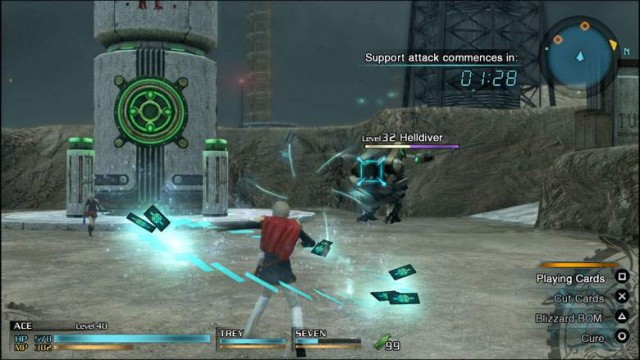 That's why it's a shame that Square-Enix couldn't resist doing their usual routine here. This is a tough game, and so the only way to feasibly keep your party up to par is to  ta-da!  grind to oblivion. That, in and of itself, is not the problem. The problem is that for as exciting as the story missions are, everything outside of those missions feels plodding and undercooked. The game's got this massive overworld that it doesn't seem to know what to do with; most of your productive time is spent in the central hub and most of the cities either have nothing of note or can only be visited during plot-related events. World travel feels like prolongation, and the random battles absolutely do not work in this format. Type-0's combat lends itself well to unpredictable environments full of cover and winding corridors. When you're just fighting a couple of stray monsters in an open field, it digresses to formless button mashing.

Type-0 actually has a timer in between story missions; invoking memories of last year's Danganronpa games, players are invited to spend this time socializing with other students or engaging in side activities. Since grinding is necessary to keep your cadets in fighting shape, partaking in quests would seem to be the ideal option. Most of the quests are relatively dull, though, and even worse, most of them don't even award experience. You'd think that would be the number-one rule, and yet it's totally possible to venture out into the overworld, kill X number of Y enemy, and get nothing more than a single item as payment. Grinding in the traditional manner is a pain, since you've got 14 characters to worry about, and having them all equally battle-ready is kind of important.

So my honest advice is to just play on the lowest difficulty and spend as little time on the grind as you need to. The story missions will still be plenty challenging, and focusing solely on those is the best way to experience Type-0.

Unfortunately, the other kink in Type-0's quest-heavy focus is that this isn't a world that I ever became invested in, no thanks to the game's dreadful presentational values. For sure, there's potential here. The plot is singularly focused on the ongoing war and presented as a documentary, which is a neat hook, and Type-0 clearly embraces its status as the only M-rated Final Fantasy game to make some statements about violence that the other entries have been too tame to explore. This is a gruesome game. The opening cutscene depicts a soldier dying alongside his chocobo, both absolutely drenched in blood, and it's deliberately jarring to witness such a traditionally adorable icon of this series in such a gritty light. Square-Enix was onto something here. 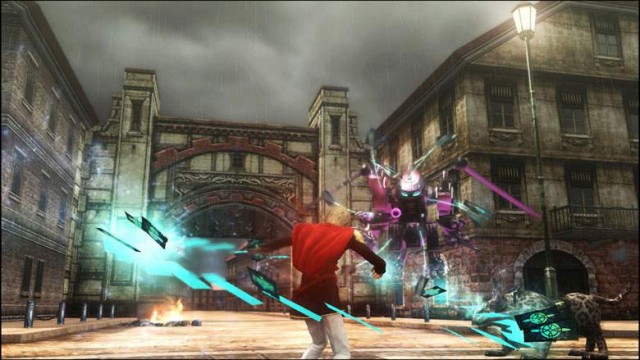 But the dialog is just uniformly awful. Most of it either seems like it was translated too literally or trips over itself trying to be "hip." (Get a load of this guy ending every sentence with "yo" like he's Jesse Pinkman.) And while no voice actors could sell this stuff, the English cast is absolutely embarrassing. I'm suspicious that these issues are specific to the localization, and if so, it's disappointing to see Square-Enix so completely botch an entry in a series that's long set a cinematic bar.

In fact, the whole port job feels very minimum-effort to me. I know this was a PSP game, but the remastered version's muddy textures and stilted animations look terrible by last-gen standards. It also doesn't translate terribly well to a proper controller  there's only one movement speed, and the camera often seems to forget who it's working for. We managed to figure out all the way back in 1998 how a lock-on system should work, and yet Type-0 still has trouble keeping the player character between the camera and the target.

If it's true that a good number of people were just buying this for the Final Fantasy XV demo, well, there are worse games to be stuck with, believe me. The basic combat's a pleasure, and the narrowly-focused story missions are gold for it. But it's so uncommitted to what it does well that it's shorter than just about any other Final Fantasy game to date and still manages to feel bloated. Taking into consideration the terrible dialog and underachieving port job, Type-0 is still worth playing, but I feel a bit sorry for anyone who paid full price for this and honestly expected a product in line with current-gen, AAA standards.
3/5

If you enjoyed this Final Fantasy Type-0 HD review, you're encouraged to discuss it with the author and with other members of the site's community. If you don't already have an HonestGamers account, you can sign up for one in a snap. Thank you for reading!

© 1998-2020 HonestGamers
None of the material contained within this site may be reproduced in any conceivable fashion without permission from the author(s) of said material. This site is not sponsored or endorsed by Nintendo, Sega, Sony, Microsoft, or any other such party. Final Fantasy Type-0 HD is a registered trademark of its copyright holder. This site makes no claim to Final Fantasy Type-0 HD, its characters, screenshots, artwork, music, or any intellectual property contained within. Opinions expressed on this site do not necessarily represent the opinion of site staff or sponsors. Staff and freelance reviews are typically written based on time spent with a retail review copy or review key for the game that is provided by its publisher.