It wasn't all my fault that I couldn't get very far in videogames when I was a kindergartner. I'll admit that I was pretty bad at them, but there were extenuating circumstances. Not only were the 8-bit titles I attempted to play in general harder than what became available later, there was also no saving. I would fire up the NES, get as far as I could in however many hours my mom let me play that day, and quit, only to try those same levels again tomorrow. The roguelite in general is a throwback to the experience of playing those games at that age, with its difficulty, its emphasis on repetition and skill improvement, and, of course, randomization filling in for one's childhood ignorance and forgetfulness. Sure, it's not a perfect analogy, but it's difficult not to recognize the relationship when playing a game with 8-bit designs like Risk of Rain.

The premise is simple enough, at least at first. Risk of Rain sets you up as a survivor of a starship crash who must find the teleporter in each 2D level to travel to the next area. The first character available, the Commando, has a few basic moves: he can perform a standard shot with his weapon, perform a piercing shot to hit multiple enemies at once, rapidly fire a sustained burst, and he can execute a quick dodge. All except for the first require a cooldown of a few seconds, and mastering when to use these abilities, and the most effective ways to string them together, is the player's first step. 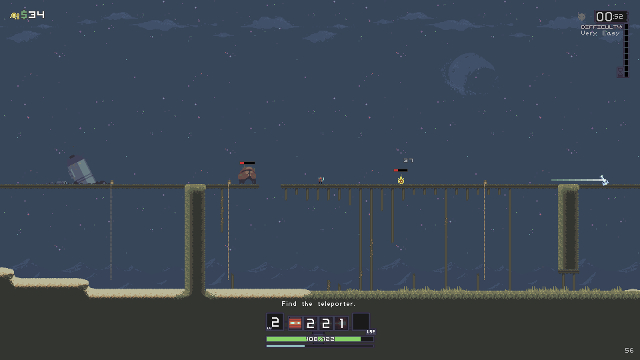 The next is to figure out exactly what Risk of Rain expects of you, and here is where your troubles begin. Enemies spawn randomly until the player reaches the teleporter, at which point a boss monster is summoned and the rate at which regular enemies spawn rapidly increases. Survive for ninety seconds, and all spawning stops. Take out the boss, and all the other remaining enemies to activate the teleporter. Some bosses, like the slow moving Colossus, can be avoided until the easier enemies are taken care of, while others, like the titanic Magma Worm or the teleporting Imp Overlord, will chase you all through the spawning period and won't let up until dead.

If you've survived this far, it's time to go through the sanitized level and purchase all of the treasure chests you can find and afford to open with the gold those enemies dropped. Chests contain random items which grant permanent abilities, from the mundane, such as HP increases, to the game changing, like increased jumping abilities that open new areas and rockets that provide a chance for a long range hit with every attack. And most importantly, abilities stack. If you get four double-jump granting items, you'll be able to jump four additional times. Get none, and you'll go through the entire game with a measly single hop. Both outcomes are equally likely, but most long playthroughs will see at least some vertical growth either from more jumps or from a jetpack. There are also drones to find, which surround the player with helpful extra firepower or automatic healing.

From here, the gameplay in Risk of Rain expands geometrically. 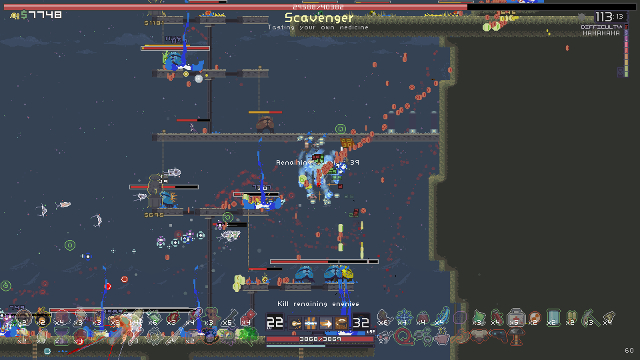 There are six levels to go through in Risk of Rain, and if that sounds small, it's not. Light randomization provides some variety in maps (eleven in all), but the real difference comes in the number and combination of enemies that start to sprout up as you progress. In Risk of Rain, the game clock is tied to the difficulty gauge, which is always going up. As it increases, so does the number and difficulty of spawning enemies. The first time a boss spawned without me hitting a teleporter, I was killed immediately. After half a dozen spawned at once, I lowered the overall difficulty setting (distinct from the timer) for my next playthrough. I was eventually able to reach the final level, which proved far too difficult on my first few tries. This is where the titular risk comes into play. On the penultimate level of each playthrough the player has a choice: go back to a previous level and try to outpace the ever-increasing difficulty by stacking powerups, or go on to the final level at the current difficulty. It can be a difficult decision, and the randomized item pickups provide no guarantee of success if one chooses to go backward.

Achieving various goals throughout the campaign unlocks new characters. These aren't mere palette swaps, each plays differently than the others. Take the Huntress, with her unique ability to attack without slowing down at all, even when running away from her target. Or consider the Enforcer, able to place down his riot-shield for full invincibility, but only in one direction. When playing the Enforcer, find a place to get your back to the wall and make your stand...just watch out for flying and teleporting enemies, whose abilities now seem so much more deadly than when you played as the nimble Commando. Risk of Rain is full of little surprises like this, design quirks that make more sense as you get deeper into the gameplay. It's like a Magic Eye puzzle slowly coming into focus, and when it happens, it's awesome.

In my favorite session with Risk of Rain, I was playing as the slow moving robotic Loader. With no dodging ability, the Loader relies on an invincibility skill that lasts three seconds and takes five to cooldown. Incredibly, I got the rare Alien Head item, which lowers cooldowns, twice. Stacking meant that the invincibilty skill was ready to use again before its effect wore off. I was completely and totally invincible, and giddily cycled through the levels gaining power until my trigger
finger started to hurt from spamming invincibility and I decided to sail through the finale with an absurd cache of powerups and a small army of drones. Dozens of bosses fell at my feet as I made my way to the final encounter, and I cackled like a madman the whole time.

Risk of Rain isn't quite perfect. The player characters are tiny, for instance, which can be annoying. The Linux version has struggles with controller support. Troubling bugs exist, which make it possible to fall through the floor now and then. These issues aren't too awful, but they're noteworthy, and definitely a problem. In general though, Risk of Rain is a beautiful piece of work. It's filled with all the challenge and surprise that I only imagined into the games I played as a kid. Once again, I find myself repeating a series of levels every day. Only now, those levels are actually showing me something new.
4.5/5

If you enjoyed this Risk of Rain review, you're encouraged to discuss it with the author and with other members of the site's community. If you don't already have an HonestGamers account, you can sign up for one in a snap. Thank you for reading!

© 1998-2020 HonestGamers
None of the material contained within this site may be reproduced in any conceivable fashion without permission from the author(s) of said material. This site is not sponsored or endorsed by Nintendo, Sega, Sony, Microsoft, or any other such party. Risk of Rain is a registered trademark of its copyright holder. This site makes no claim to Risk of Rain, its characters, screenshots, artwork, music, or any intellectual property contained within. Opinions expressed on this site do not necessarily represent the opinion of site staff or sponsors. Staff and freelance reviews are typically written based on time spent with a retail review copy or review key for the game that is provided by its publisher.