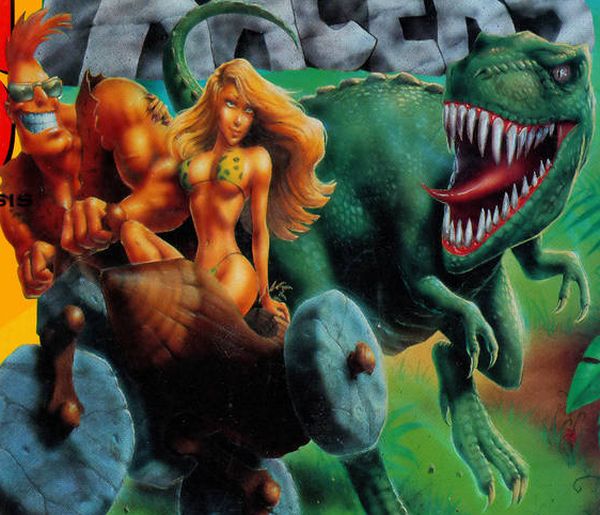 I experienced a single moment of delight when playing BC Racers, a Stone Age-themed racing title developed by Core Design. Whilst scrolling through the roster, I caught a glimpse of a familiar gut stretching a leafy green bottom. On the screen before me sat the one and only Chuck Rock and his toddler son, waiting to challenge Chuck's diametric opposite Gary Gritta and a slew of other prehistoric competitors. Don't get me wrong; I'm not saying I had a tremendous fan-gasm or anything. It was just soothing to recognize a particular sprite amongst a group of nobodies in what I figured would likely be a lousy racing title.

Big surprise: that's precisely what BC Racers is...

Joining Chuck and son in this outing are other pairs of early humans inspired by modern musicians, with names like Brick Jagger, Bob Hardly, Jimi Handtrix, Granite Jackstone, and Sid Viscous. This seems to imply that the game places a firm emphasis on its musical elements, when it actually features a pretty dull soundtrack. For instance, the tune you hear during character selection sounds like a dreary, antiquated ditty that you might expect to find playing on a phonograph. Calling it an ill-fitting selection for a racing title would be an understatement. It's an early indicator of the sort of quality of music you can expect from BC Racer's forgettable score. 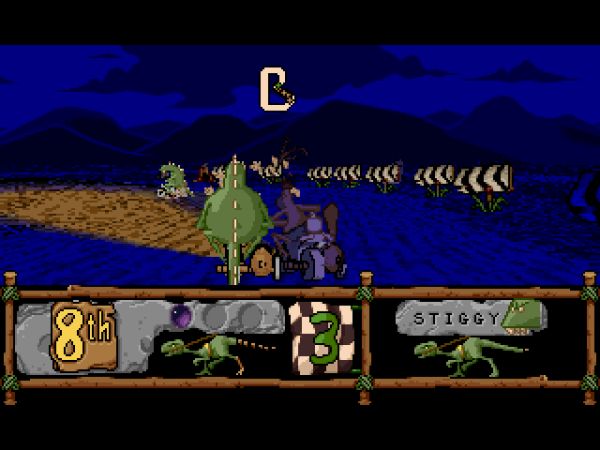 Settling on a duo can be tough. As with any racing game, the stats vary for each couple, theoretically providing you with an assortment of personalities who possess distinct playing styles, advantages, and weaknesses. For example, Granite and her partner Tina Burna are the fastest twosome, which is offset by their crappy defensive capabilities. Because of this, they can only withstand a few blows before it's lights out for them. Although it might sound as though each racer is useful in his or her own way, the truth is that the whole roster sucks. I say this because BC Racers is not set up to allow just anyone to win. Slower competitors don't stand a chance against their swifter adversaries.

Don't believe me? Go ahead and play as Chuck Rock and son. Watch in horror as every opponent passes you. No matter what tactic you dispense in your quest to receive a checkered flag, you can't seem to take the lead for very long. This is because Chuck's speed is pitiful and he has nothing to compensate for it. Even if you initiate your turbo thrusters, you still have to navigate the course while struggling with Chuck's horrible handling, and then get lucky enough to take the lead. Eventually your boost subsides, which is when Granite and Tina usually blow past you for the win.

It's clear that the game is attempting to mimic Super Mario Kart, but it fails to do so. In Mario Kart, you could attain the lead position without relying on statistics alone. This is because that game offered impressive weaponry and provided you with plenty of surprises and shortcuts that you could use to your advantage. BC Racers, on the other hand, sports only one offensive skill and it's about as effective as a square wheel. Now and then an opponent might pull up on your ride side. If that happens, you can press a button to launch a melee assault that temporarily stuns your foe. That's it. You basically have a rudimentary attack at your disposal that relies on an arbitrary condition, and it unfortunately doesn't cause enough damage to be worthwhile. 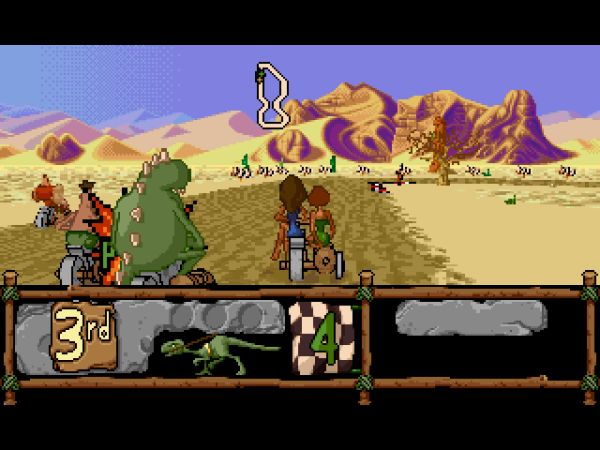 If you've been following me up to this point, then you may have realized something dire. The Sega 32X didn't come with its own controller because it was an add-on platform, and it therefore borrowed the Genesis/Mega Drive pad. I've mentioned or at least hinted at three functions that require button pressing: acceleration, turbo, and attack. Genesis only had three buttons. Wait, how do you brake?

If there's one racing faux pas that grinds my gears, it's when developers assign the brake function to Down on the control pad. Have you ever attempted to brake around a curve while using such a setup? It's maddening, mainly because it's difficult to repeatedly shift your thumb between two directions so as to regulate how much or how often you wish to turn and/or brake. More often than not, you end up careening out of control and drifting into either the audience or a hazard. Remember, your vehicle dies after its body sustains enough damage, leading to a depressing "game over" screen. That's where you learn that the game only supplies you with a few continues, so you need to mitigate bodily harm as much as possible. That's tricky to do when braking is more of a liability than a safety mechanism.

If at this point you've begun to shed tears over what could have been an excellent racing title, then I shall implore you not to lament. Even if the game bore functional play control and a balanced cast of competitors, it'd still be a middling experience. I say this because BC Racers showcases only a handful of trite, yawn-inducing stages. I will admit, though, that the first level at least looks gorgeous, decked out with a bright yellow sun against a fiery crimson skyline. Aside from that it's your average, no-frills course. Nearly every subsequent track is also standard fare: an icy road, a desert complete with tufts of sand that slow you down, a jungle with a troublesome river, and even a valley surrounded by lava. In other words, skipping this game means missing out on stages offered by every other cartoony racing title ever. 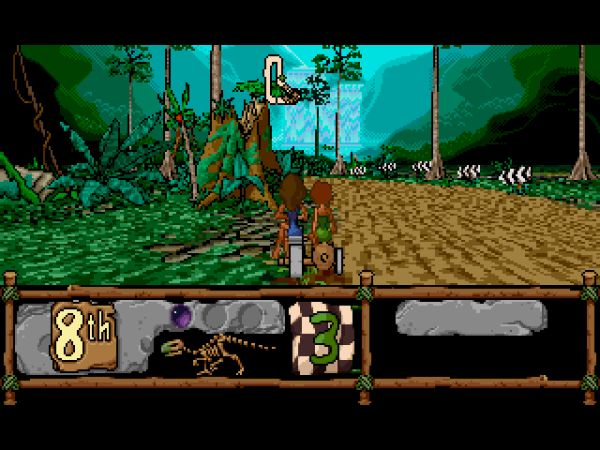 In all honesty, I never expected BC Racers to be any good. It's hard to locate an obscure game that's above par, especially a racing title. Consider also that I could probably count the number of at least decent caveman-themed games on one hand, and you might be able to understand my low expectations for BC Racers. As I had predicted, the game is plagued by shoddy development and tacked on concepts borrowed from a vastly superior hit released on a rival platform, not to mention a poorly thought out control scheme. Don't fool yourself into believing that this game might be able to supplement Super Mario Kart. Just play that instead and leave BC Racers in the dust.

If you enjoyed this BC Racers review, you're encouraged to discuss it with the author and with other members of the site's community. If you don't already have an HonestGamers account, you can sign up for one in a snap. Thank you for reading!

© 1998 - 2022 HonestGamers
None of the material contained within this site may be reproduced in any conceivable fashion without permission from the author(s) of said material. This site is not sponsored or endorsed by Nintendo, Sega, Sony, Microsoft, or any other such party. BC Racers is a registered trademark of its copyright holder. This site makes no claim to BC Racers, its characters, screenshots, artwork, music, or any intellectual property contained within. Opinions expressed on this site do not necessarily represent the opinion of site staff or sponsors. Staff and freelance reviews are typically written based on time spent with a retail review copy or review key for the game that is provided by its publisher.