The Captain didn't choose the zee. Growing up in Fallen London on your own is a death sentence, so if you had no one else, you ran with gangs. Small, vicious gatherings of urchins that tried to stay alive through sheer will and weight of number  but the time would come when you grew too tall and too old to find acceptance among them. The Captain could no longer depend on life in the gutters, so all that was left was the zee.

All went well for a spell. He took a fellow outgrown urchin with him out upon the unknown waters surrounding London and eked out an existence. Creeping out from the chocked docks of the fallen capital, he ferried the damned to their final resting place at Venderbight and battled rogue pirate vessels to reap their stolen cargo. By slowly plotting out the underground seas, he slowly established trade routes and carved out safe passages of exploration, always ready to douse lights and vanish into a fog bank should mammoth angler-crabs or ship-eating living icebergs disturb the calm waters. 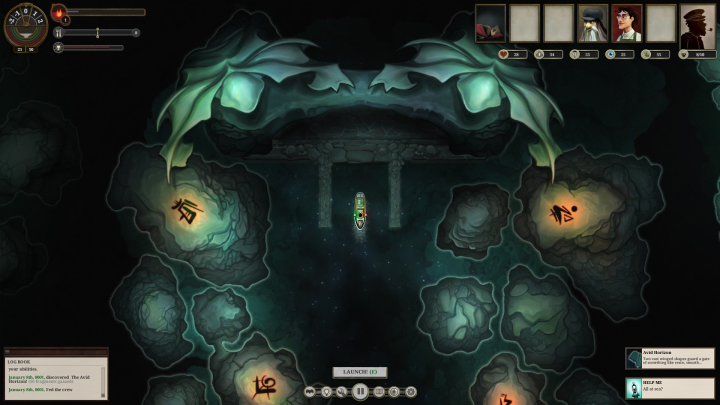 He explored the docks for the Admiralty in exchange for coin and fuel. He traded stories of whimsy and loss with the Alarming Scholar. His boat was slow, and trying to keep atop expenses was a grind, but newer areas opened up as his courage grew and he sneaked further and further from safe shores. He befriended the sisters who lived on the isolated island of Hunters Keep; he worked among the mail-rodents of Nuncio; he helped with the gruelling, unending deconstruction of The Salt Lions.

Maybe it was one thing that changed the Captain, or maybe it was the accumulation of misery that befalls any who spend their time exploring the zee. Some say it started the day he lost his officer, putting her ashore on Khan's Shadow. The same day, he learnt the news of his lover's death when he returned to London's docks. The whispers started then; that he had been cursed by the salt. That sins preformed for the sake of his men on the zee had come back to haunt him. He was at Hunter's Keep when it was set ablaze, unable to make any sense of the possessed azure-eyed maid between her weeps and snarls, only able to drag one charred and broken sister alive from the flames of that day. He became harder to approach, less willing to socialise in the pubs and docks of London. He actively sought out danger among the waves. His meticulously carved avenues of safety became forgotten and ignored and he set his sails for the darkness and the unknown. 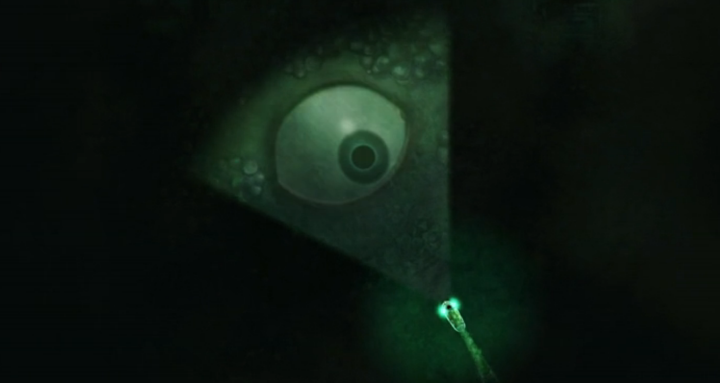 His returns to London became more and more sporadic, his supplies dangerously low and his crew submitting further and further to the grips of terror. They spoke of iron-clad sharks appearing in the deeps, of the earth rumbling and massive eyes opening beneath the waves. They spoke of sea turtles luring sailors in with apparitions of beckoning women. They spoke of a machine that seared their eyes and threatened their minds. They spoke of discovered logs reporting purples fires, upside-down houses and dolls with buttons for teeth. Then they drank and drank and, like men walking towards their own execution, slowly shuffled up the gangplank and back onto their ship.

It was the moth that was to seal their doom.

You could hear the echo of its giant wing beats for miles around, but it was in the faltering light of The Ragged Crow that they caught their first glimpse of it. Sailing past the welcoming lights of Mount Palmerston, they pursued it into uncharted waters. Soon, they were beyond the small comfort of the Crows beacon, their pinprick light searching frantically for the creature. Food and fuel started to run low, but if they had turned back then, they would have made port. They would have been safe. But the Captain wanted to go just a little further in search of his quarry. And then the blizzard hit.

None can rightly guess at what came first; the hunger or the mutiny. The blizzard slowed the ships progress to a crawl, trapping them in a nightmare of whipping ice and snow. It strained the ships engine; it sapped the crew of their strength and their will to live. The food had gone; they were hungry and desperate.

Some of the crew sided with the Captain, perhaps out of misplaced loyalty, perhaps through knowing with cold certainty that there was no escape for them by doubling back. Maybe if they pressed on they would discover a new port; maybe if they found and slew the moth, they would find its corpse edible. The mutineers fell and for the first time in days there was food to be had. 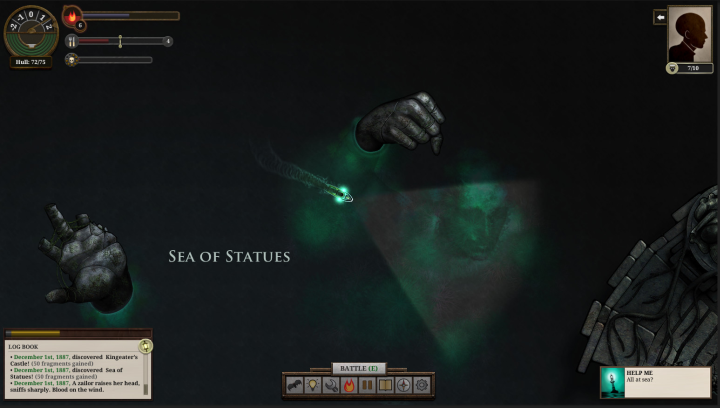 Madness covered the ship like an epidemic. The ships light had been extinguished to try and save fuel so they dove into the darkness blind. The Captain stood on the prow, listening for the distant thud of the moths massive wings and watched impassively as his crew lost their minds. One thought she heard the bells of London ringing off port and dove overboard to greet them. No one tried to stop her, and then there were less of them. When their macabre food supplies had perished, another sacrifice had to be made. And then there were less of them.

Those that remained slowly delved onward, though they no longer knew their direction. Horrifying visions visited them each night, the deck given voice to muffled screams and sobs. The Captain stood unwavering on deck, steering ceaselessly into the void. The fuel dried up next; the ship was robbed of life. At the mercy of the waves, with no hope of ever escaping the blizzard, what was left of the crew embraced insanity. Another mutiny failed, more crew turned on each other, and more broken minds flung themselves into the unforgiving water or became the next grotesque meal.

Then the thudding resumed. It was distant at first, as if mocking the impotency of their hunt, but increasing in volume with violent succession. Their doomed expedition had concluded; but it was the moth that had found them.

If you enjoyed this Sunless Sea review, you're encouraged to discuss it with the author and with other members of the site's community. If you don't already have an HonestGamers account, you can sign up for one in a snap. Thank you for reading!

© 1998-2020 HonestGamers
None of the material contained within this site may be reproduced in any conceivable fashion without permission from the author(s) of said material. This site is not sponsored or endorsed by Nintendo, Sega, Sony, Microsoft, or any other such party. Sunless Sea is a registered trademark of its copyright holder. This site makes no claim to Sunless Sea, its characters, screenshots, artwork, music, or any intellectual property contained within. Opinions expressed on this site do not necessarily represent the opinion of site staff or sponsors. Staff and freelance reviews are typically written based on time spent with a retail review copy or review key for the game that is provided by its publisher.