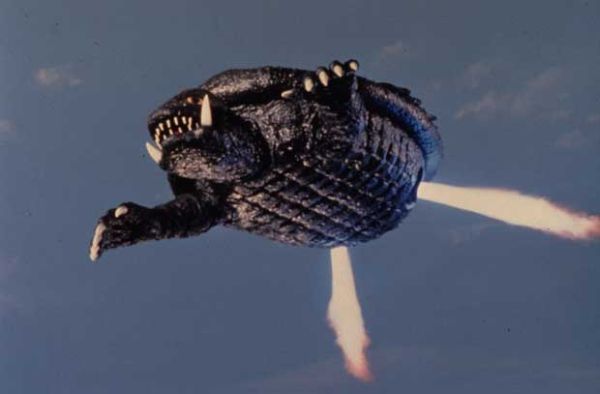 I've been a fan of the ludicrous Gamera franchise since I was a Kindergartener. This shouldn't surprise those of you who might know me, as I have a penchant for ridiculous and hilariously bizarre films. I mean, we're talking about a series of motion pictures starring a tremendous, heroic turtle who retracts his legs into his shell and uses his "limb holes" as jet thrusters, thereby allowing him to spin through the air.

Even Gamera's adversaries are outrageous. In the early '70s, for instance, he battled a gigantic talking shark from outer space who could hypnotize people. Prior to that, he went toe-to-toe with a blade-headed quadruped equipped with remotely controlled shurikens that were hidden beneath fleshy flaps near its skull. Heck, I've at times wondered if Gamera's creators didn't simply pin a plethora of random words to a wall and launch darts at them as a means of determining what his next opponent would be. I'd like to believe there was at least the possibility of seeing the beloved reptile take on an immense undead kitten with chainsaws for legs and a marsupial-like pouch that exudes molten lava.

If there's anything I enjoy as much as kaiju movies, it's retro gaming. When I discovered that a Gamera Game Boy title--called Gamera: Daikaijuu Kuuchuu Kessen--exists, I nearly fainted. I had to catch a glimpse of the so-called "Guardian of the Universe" rendered in black and green, regardless of the voice in my head that I continually suppressed:


Remember that Godzilla portable game you played several years ago? This one's going to be worse. Trust me!

I should have listened... 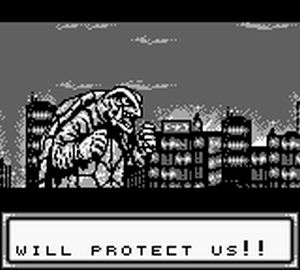 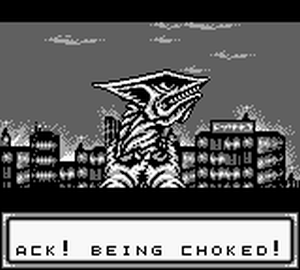 Gamera is a cinematic fighting game, a genre that's pretty much nonexistent outside of Japan. Rather than allowing you to control the shelled protector in real-time combat, the game plays out like a turn-based RPG. It prompts you to choose a command, providing you with a menu detailing Gamera's available maneuvers and the corresponding button combinations. After you've settled on an action, your foe quickly selects one as well and the game generates a cutscene based on the interaction. Using a system similar to rock-paper-scissors, the game then decides which creature managed to dominate the exchange and deals damage to the unsuccessful combatant. Roughly eighty percent of the time, though, the result is a stalemate

...and therein lies Gamera's fatal flaw. Landing a blow is based entirely on luck, so there's no intellectual process or skill involved as you opt for a particular attack. It doesn't matter which one you pick most of the time anyway, since your rival tends to either deflect it or dodge it and walk away unscathed. You have no way of knowing when this will occur, so your only viable scheme is to go for a technique that sounds cool and pray it connects. Unfortunately, even if you wound your target, it's likely you'll only scrape off a trifling percentage of his hit points.

I recall nearly turning the game off for good when battling the first stage's enemy, the winged menace known as Gyaos. As cheesy as this might sound, I then remembered how perseverance is a recurring theme in the movie series. I figured then that I should stick it out, if only so I could warn other fans to beware of this title. After ages of watching the flying behemoth evade my claws and block my bashes, I managed to dispense enough punishment to incapacitate him. I celebrated by my hard fought victory with a dry, wicked cackle and a meaty middle finger salute to the screen. I then put my feet up and awaited my next competitor--

"You've got to be kidding," I said. Because I'm the gaming equivalent of a masochist, I suffered through another eternity of near misses and countless sighs. Call me crazy, but I don't recall a single Gamera film that featured fight scenes with boatloads of failed attempts at violence. 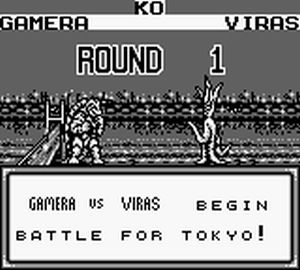 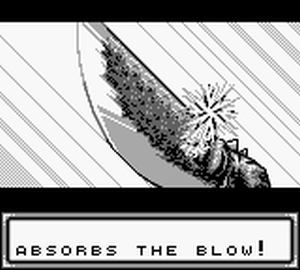 Thankfully, by the time I reached the second beastie, a titanic cephalopod named Viras, I learned a very effective tactic for dealing with pests: spam the fireball. You see, your move set shifts depending on your current location in relation to the villain. While standing just a wee bit back from him, you can cough up fireballs that possess a higher success rate than most offensive options. What's more, the move negates almost any incursion your challenger initiates, while dealing a noticeably elevated amount of damage. So basically, the best strategy is to continually utilize the same action until you're blue in the face. I'm not sure what's more tedious: repeating one command ad nauseam, or performing a variety of mostly useless maneuvers.

Maybe I should consider the next point an act of mercy, but the monster lover in me can't mask his disappointment just the same: Gamera offers only four levels, with merely three different kaiju to face. Three. The fourth stage is a rehash of the first one, without any added challenge or recognizable visual touch-ups. I didn't think it was possible, what with this game's lackluster quality, but it managed to even further disappointment me. I'm not convinced that the developers couldn't have converted another of Daiei's colossi into sprite form. Cripes, even a newly invented brute would have been preferable to redoing the introductory stage.

Of course, given how slack the game's pacing tends to be, those four levels feel like dozens of clashes. Gamera: Daikaijuu Kuuchuu Kessen drags so much that I can't even recommend it to fellow fans of the franchise. Heck, suffering through the insipid eighty-five percent stock footage of "Gamera: Super Monster" would be a less painful way to spend an afternoon. If this game accomplishes anything, it proves that not even B-movie brands are safe from shovelware adaptations.
1/5

If you enjoyed this Gamera: Daikaijuu Kuuchuu Kessen review, you're encouraged to discuss it with the author and with other members of the site's community. If you don't already have an HonestGamers account, you can sign up for one in a snap. Thank you for reading!

© 1998-2020 HonestGamers
None of the material contained within this site may be reproduced in any conceivable fashion without permission from the author(s) of said material. This site is not sponsored or endorsed by Nintendo, Sega, Sony, Microsoft, or any other such party. Gamera: Daikaijuu Kuuchuu Kessen is a registered trademark of its copyright holder. This site makes no claim to Gamera: Daikaijuu Kuuchuu Kessen, its characters, screenshots, artwork, music, or any intellectual property contained within. Opinions expressed on this site do not necessarily represent the opinion of site staff or sponsors. Staff and freelance reviews are typically written based on time spent with a retail review copy or review key for the game that is provided by its publisher.