Some of you might have heard of RayForce/Gunlock/Layer Section/Galactic Attack, and those of you comfortable enough with the shoot-em-up genre to have enjoyed it should go to Steam right now and purchase the hell out of KAMUI, which earns its pretentious use of a full caps title through sheer awesomeness. For the unaware, back when scrolling shooters were the big thing, headline games where developed with such sublime skill theyre still held in reverence some decades later. The R-Types, the Thunder Forces, the Daruises--but not every notable release could be balanced upon the pedestal, and thats where RayForce/Gunlock/Layer Section/Galactic Attack exists; a brilliant series just outside the blinding spotlight.

Lets pause to do something about that name. RayForce/Gunlock/Layer Section/Galactic Attack had the unfortunate habit of having a new title slapped on it for every port it got so Ill stick with the original release name for the Japanese arcades. While it never reached the heights that some games of a similar quality did, Rayforce attracted enough of a following to prompt two direct sequels and, eventually, inspired the homebrew developer team of Siter Skain to produce KAMUI. 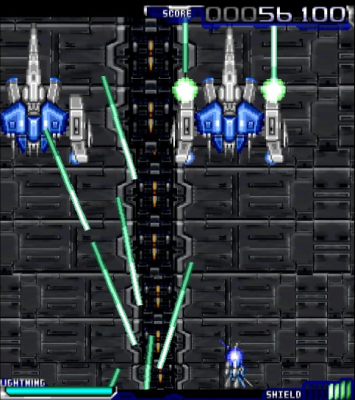 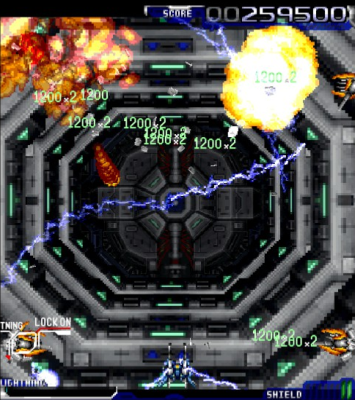 Both horizontal shooters share many similarities. Each game exists on two layers, one section that your ship can engage with its primary weapons, and a lower section that can only be targeted with the use of a secondary attack. In both cases, it means constantly having to decide which layer possesses the greatest threat and needs to be dealt with, all the while being pelted with bullets from both. KAMUI takes that idea and runs with it; youll not get far in the game if you dont learn how to switch between the two on the fly; you cant use your primary weapon to plug away at fighters existing at the same altitude as you at the same time as firing auto-homing lightning bolts at the sneaky buggers lurking beneath you. Staying alive becomes a dance of sorts, asking you to dart between split second bursts of one attack to clear yourself a path before having to switch back to the next to stay on top of advancing threats. Leave one plane for too long and it may clutter up with more laser beams and cannon fire than you can handle.

KAMUIs obligatory lone fighter is purposefully sluggish and unwieldy. It should be noted that it isnt supposed to be a bullet hell shooter where you have a defined hit box and are asked to plot imposable paths through a labyrinth of death. But times will come when theres more artillery on screen that youll be able to physically avoid. Some of the time, that could be chalked up to your inability to clear the screen of hostiles but there are points when youre backed in a corner and theres no way to dodge the wall of bullets coming at you. Or out-manoeuvre multiple homing plasma blasts. Or get out of the explosive range of an area-of-effect missile. So youre forced to dig into the secondary feature of the secondary weapon; unleashing a huge electric blast that destroys all incoming bullets and craft.

So, heres the problem; your primary weapon kind of sucks, and power-ups only bolster it to cover more screen rather than dial up its punch, so destroying the big threats means you need to use the electric burst for more than just creating a safe haven. BUT! Each time you drain the lightning meter that powers it, you have to wait for it to it to refill before you can use your homing attack and cause any damage to the bottom layer. The result is a frantic argument with yourself on how to best to use your resources; blasting your way through that slowly advancing pink starburst of neon death might mean youre unable to take out the incoming fleet of ships ascending through the clouds, or silence the platoon of rapid-firing tanks smugly pelting you from below. 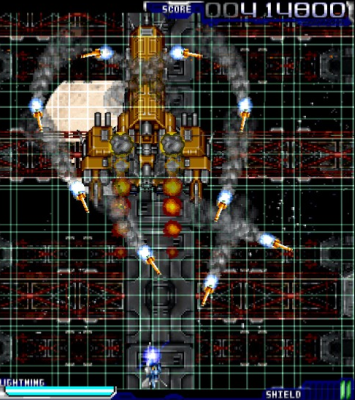 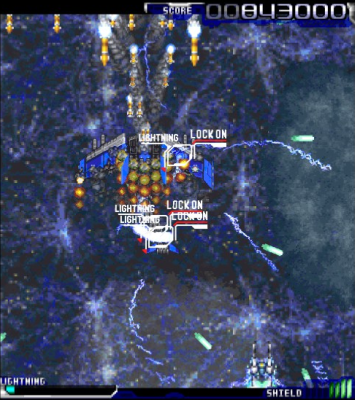 The meter doesnt take long to recharge, which means you have access to screen-clearing destruction after only a handful of seconds, but when the screen fills with bullets, only a handful of seconds is too long. Even here, KAMUI is generous, doing away with the one hit=death shtick and giving you a shield that can absorb numerous blows before you forfeit a precious life. Even on the hardest settings, nothing feels unfair and every death is technically avoidable; you were too focused on one layer and the other became unmanageable, or you mismanaged your lightning gauge and found yourself impotent at exactly the wrong time. The bosses that bracket each level can have individual weapons taken on and destroyed to soften their onslaught, or you can brave crescendos of offence in an effort to go right for the weak spot. A massive disposal bot lurking at the bottom of a mineshaft has numerous metallic tentacles that it can either spear you with, or shoot beams of glowing red laser from. Smash the side armour and blast at their base, fry them with electric bursts where they stand, or ignore them and hope youre quick to react when they dart forward without warning. Super computers throw holographic battles made real at you should you find your way into their underground lair. Finish them off, and it takes you on itself, where you have the unenviable choice between trying to whittle down its defences or pelting it directly with homing lightning. Cant do both  got to hurt it to win. Got to defend yourself to live.

Even little details like how the stages connect together are clever in design; theres no obligatory rolling out of background tropes like the jungle level or the factory level just so boxes can be checked. KAMUI is a seamless journey stitching each of the six stages to each other, offering a rare glimpse of chartable progress from cloud-covered sky, through depths of earth into the outer reaches of the planet to take on an orbiting weapons platform. Its a real labour of love that not only does credit to its esteemed source material but manages to out-perform it. Its more forgiving, more fluid, more concise. It only has one bloody name. Thats a definite plus.

If you enjoyed this KAMUI review, you're encouraged to discuss it with the author and with other members of the site's community. If you don't already have an HonestGamers account, you can sign up for one in a snap. Thank you for reading!

© 1998-2020 HonestGamers
None of the material contained within this site may be reproduced in any conceivable fashion without permission from the author(s) of said material. This site is not sponsored or endorsed by Nintendo, Sega, Sony, Microsoft, or any other such party. KAMUI is a registered trademark of its copyright holder. This site makes no claim to KAMUI, its characters, screenshots, artwork, music, or any intellectual property contained within. Opinions expressed on this site do not necessarily represent the opinion of site staff or sponsors. Staff and freelance reviews are typically written based on time spent with a retail review copy or review key for the game that is provided by its publisher.