Darksiders II, the follow up to the well-received original and the swan song of THQ, is a relic at only a few years old. A sprawling single player game that runs on fantasy and the rule of fun, Darksiders II has zero pretension. It takes elements from games from years past and dresses them up with a 90s comic book aesthetic and ethos. Remember Joe Madureira? He wrote and drew Battle Chasers, which, other than Spawn, is perhaps the most 90s comic book series of all time. Readers of this website will perhaps know him better from his work on the covers of North America's PlayStation Magazine. Darksiders II has its entire world designed by Madureira. As you might expect, it is not a game for adults, or even adults in tune with their inner child. It is a game meant to appeal to the inner 14-year-old.

And I, for one, am fine with that.

It takes a certain kind of confidence to make a game that wears its influences on its sleeve. Darksiders II takes its cues from sources as diverse as The Legend of Zelda, Portal, and Shadow of the Colossus, among many others. That's not an easy thing to pull off. How can one game world possibly incorporate so many elements without seeming like the pieces were just thrown together? There are two key elements that make Darksiders II work: size and atmosphere. 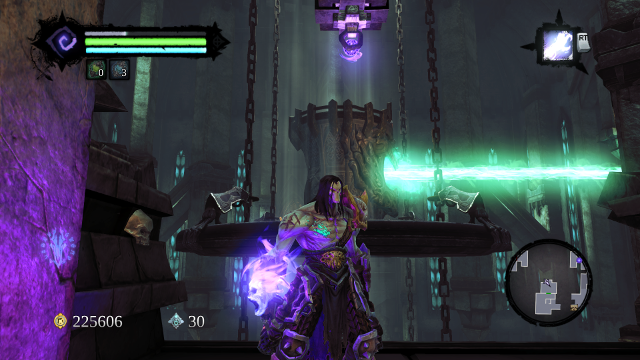 The first element is obvious: for disparate gameplay elements to gel, they all need room to breathe. Darksiders II does a particularly great job here. The hub worlds the player character travels through are enormous, and long dungeons filled with puzzles and combat dot their landscape. If the player simply dropped into a Legend of Zelda inspired dungeon and left after a few minutes of puzzles, the effect would be jarring. Thankfully, the dungeons are so large and so plentiful that, had they been put together with nothing in between, they still would have formed a perfectly acceptably sized and entertaining game. With some tuning, Darksiders II could have dropped the dungeons entirely and become a pure action title. What Darksiders II achieves by adding an open world filled with other things to do is the feeling that one is playing multiple complete games that are all mixed together. 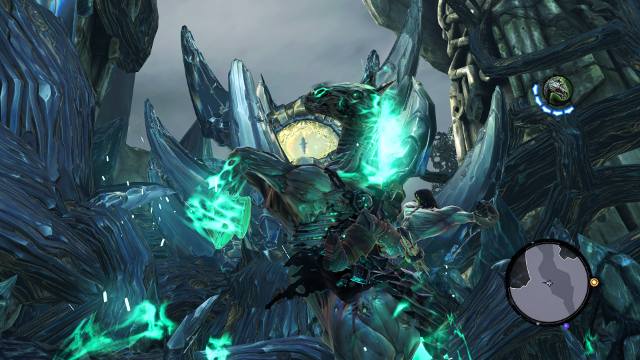 Roaming through an enormous land on a horse is entertaining enough in and of itself, providing that horse is a flaming demon meant to help ring in the apocalypse and the player has the option to battle myriad foes on horseback in the neverending quest for experience and equipment. A shameless, simplified ripoff of a battle from Shadow of the Colossus serves as one exciting payoff to all that riding, and is perfectly positioned to stimulate the player right around the halfway point of the game.

The second element, atmosphere, demands equal attention. Darksiders II takes the universe of the first game and expands it, with the player again taking on the role of a horseman of the apocalypse. The design across disparate environments maintains a remarkable consistency, whether Death is strolling through the lush, beautiful first world, or questing in the land of the dead. Say what you will about the 90s EXTREME comic book era, but the best of that era's creators knew how to make stimulating visuals that were also beautiful. The environments through which Death travels would have fit in wonderfully in that time's first batch of Image comics, particularly a world of the undead featuring living floating fortresses complete with gigantic snapping dragon heads.

Darksiders II reminds me most of another game that featured a hub world and didn't mind accusations of unoriginality: Jak II. Where Jak blended Nintendo 64 era platforming, Tony Hawk skateboarding and Grand Theft Auto city navigation, Darksiders II blends the influences of popular games from throughout the second half of the '00s. Unlike that game, Darksiders II does not bear the burden of being a sequel to a family friendly title, and manages to avoid a tonal conflict. It builds on its predecessor in every way. 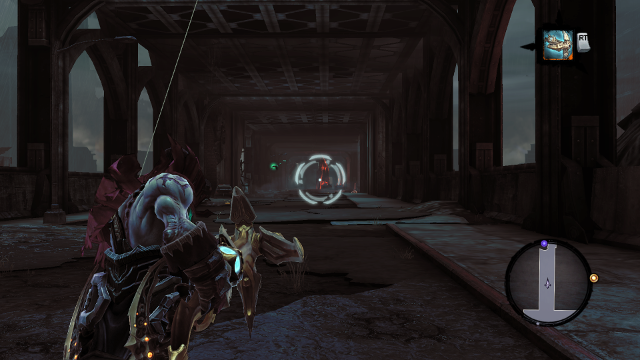 Sure, there is a weak segment in which the game becomes a third-person shooter about killing zombies, but it is brief. The designers, mercifully, chose to make it almost impossible to fail said segment if the player equips a certain item that all players will already have at that point. This area is the major gameplay failure in this entire title, and with this item equipped should take no more that an hour of your time. I shudder to think at the frustration it would have caused without that item. I would hazard a guess that it was thrown in after some play testing precisely to make this segment easier. Rule of fun prevailed, and turned what could have been a game ruining section of play into merely a bad one.

Overall, however, there can be little debate that Darksiders II is bigger, more beautiful, more interesting, and more fun than the game that came before. If you want to get lost in a well made single player experience, you simply cannot go wrong with Darksiders II.
4.5/5

If you enjoyed this Darksiders II review, you're encouraged to discuss it with the author and with other members of the site's community. If you don't already have an HonestGamers account, you can sign up for one in a snap. Thank you for reading!

© 1998-2020 HonestGamers
None of the material contained within this site may be reproduced in any conceivable fashion without permission from the author(s) of said material. This site is not sponsored or endorsed by Nintendo, Sega, Sony, Microsoft, or any other such party. Darksiders II is a registered trademark of its copyright holder. This site makes no claim to Darksiders II, its characters, screenshots, artwork, music, or any intellectual property contained within. Opinions expressed on this site do not necessarily represent the opinion of site staff or sponsors. Staff and freelance reviews are typically written based on time spent with a retail review copy or review key for the game that is provided by its publisher.