Sometimes, when reviewing a game that's pretty average if one looks at it as the sum of its parts, a good approach is to start off by discussing a point where the title rises above itself to provide a genuinely cool experience. With the Sega-CD's Sol-Feace, that's easy, in particular because it turns an element of shooters that I've grown extremely tired of seeing into a legitimately intense moment. 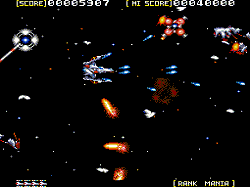 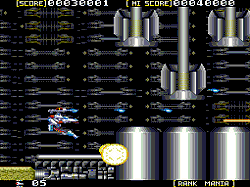 For nearly three full levels of this game, things are decent, but nothing special. Sol-Feace is a horizontally-scrolling game, but eschews the slow pace and tricky designs of a Gradius or R-Type title in order to provide fast action that approaches "bullet hell" at times. The early stages worked to ease me into things and to let me know things would be a bit more frenetic than I was expecting, but otherwise didn't really do anything to impress me.

The third level was the same for the most part, and after beating a mid-boss that looked like something out of a Gradius title, I was mostly resigned to a fate of muddling through another bland game. Then the music shifted into something a lot more intense as a gigantic serpentine creature barreled onto the screen like an All-Pro linebacker smelling the quarterback's blood. After I dodged that freight train of a creature for a bit, it settled on the right side of the screen and started firing large, exploding bullets at me. All it took was this frenetic and memorable encounter to get me interested in Sol-Feace again.

From there, the game was able to prevent that interest from perishing by occasionally tossing me additional fun moments like the one I mentioned. The next stage was one of those "move around the gigantic spacecraft destroying all its guns" levels that pop up from time to time. With the exception of one nasty little trick, this was a pretty short and simple stage that ended with me blasting a central core and flying off to the right as the massive behemoth exploded. And then, with bursts flaring around me and my guard down, a smaller vessel flew onto the screen from behind me and stole one of my lives by slamming into me.

Survive that little trick and that small rock-like ship suddenly will expand into a grotesque monstrosity that provides its own series of challenges, leading to another fun and challenging boss fight. And, as the game progresses, things just become increasingly difficult. The problem for me was that, at times, some of that difficulty was of the fake kind. When playing a shooter, I'm used to the challenge coming from two diverse factors, depending on the game. 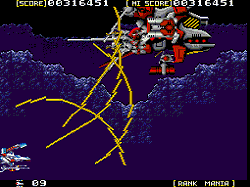 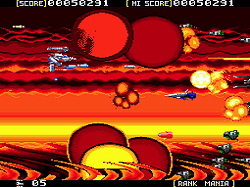 First, we have the twitch difficulty, derived from tons of bullets being on the screen in a fast-paced setting. Simply put: be quick or be dead. People with slow reflexes will find themselves getting shredded by the enemy onslaught immediately, as they won't be able to move quickly enough to find the holes in the bullet waves. On the other hand, there's the memorization difficulty, where levels are convoluted and one's success is often determined by how well they know what's coming up next, so they can be in the best position to survive.

Sol-Feace takes things a step further by tossing both factors together. Now you have to know what to expect, while also possessing the reflexes that will allow you to dodge an onslaught that is constantly threatening to overwhelm you. For the opening quartet of levels this combination wasn't too bad, with only a few dicey areas I found a bit frustrating, but the final three prove to be real monsters.

The fifth stage sends you flying through narrow corridors while being chased by enemy ships that occasionally fire missiles, but are more likely to take you out by randomly charging at you kamikaze-style. To keep away from them, you'll want to position yourself around the middle of the screen (if not slightly further to the right), but that makes it tougher to react to any twists and turns in the course. While hitting a wall isn't fatal, getting scrolled off the screen by one certainly is. And if you do graze one of the walls, you will temporarily careen out of control, making it very easy to inadvertently send your ship into a bullet or enemy. 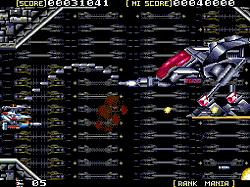 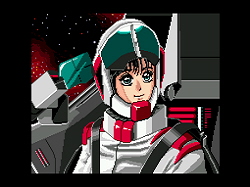 Little annoyances like that pop up regularly as the game approaches its conclusion. Maybe it's these blob-like things that periodically envelop your ship in the sixth stage, slowing you down to a crawl until they evaporate -- making it a lot tougher to dodge all the regular attacks. Or perhaps it's the hellish intro to the final, boss-heavy stage, which puts you back into narrow corridors where, this time, you have to dodge between indestructible, erratically-moving green globes. Oh, and let's not forget about the fun trick the fifth stage's boss pulls on you. The fight itself was a lot of fun, as I had to dodge lasers and a ton of bullets to destroy a bunch of machinery, but after beating it, a lengthy explosion follows. You have to stay on guard until the computer takes over the controls to whisk you to the next level, as you can still be shot down by bullets for a good 10 seconds or so. Apparently, Wolf Team likes Kaizo Traps a lot more than I do...

While my feelings about Sol-Feace wound up being mixed, I still must say that, after the first couple stages, I had no idea I'd find so much to say about it. Whether I found it interesting because of some very effective and tense moments or because it seemingly was going out of its way to annoy me, I still found it interesting, which isn't something I thought I'd be saying in the early going. Visually, this game looks decent, but isn't anything special. As you'd expect from a CD game, the music is good, but the only other additions this bit of Sega technology provided for was a lengthy and dull animated cutscene that you can view by waiting on the title screen, along with a "blink and you'll miss it" cutscene as your reward for beating the game.

Your ship isn't particularly special, either. Much like in R-Type, you quickly gain a power-up that gives your ship a lot more firepower, and then you can collect icons to alter that weaponry. That extra firepower comes in the form of two "arms" that can be adjusted to shoot at varying angles. This is neat in theory, but in execution during a fast-paced game, I found it worked more along the lines of "Looks like something tough's coming upuh, why is my top arm at a 45-degree angle? I didn't do that, did I?" than something I found consistently helpful.

Sol-Feace has its moments and its flaws, both of which serve to make it more memorable than the average shooter of its era. I can't see it being one of those shooters I regularly come back to, because of how annoying those flaws could be, but I will fondly remember those places in which Wolf Team was able to put all the pieces together to create something fun and memorable. While this game essentially defines "mixed bag", its best parts at least make it worth a bit of one's time.
3/5

If you enjoyed this Sol-Feace review, you're encouraged to discuss it with the author and with other members of the site's community. If you don't already have an HonestGamers account, you can sign up for one in a snap. Thank you for reading!

© 1998-2020 HonestGamers
None of the material contained within this site may be reproduced in any conceivable fashion without permission from the author(s) of said material. This site is not sponsored or endorsed by Nintendo, Sega, Sony, Microsoft, or any other such party. Sol-Feace is a registered trademark of its copyright holder. This site makes no claim to Sol-Feace, its characters, screenshots, artwork, music, or any intellectual property contained within. Opinions expressed on this site do not necessarily represent the opinion of site staff or sponsors. Staff and freelance reviews are typically written based on time spent with a retail review copy or review key for the game that is provided by its publisher.