And of course a prophesized FPS messiah to one day reign over them all; I think its called Half-Life 3 or something. All incredibly popular examples of manly first-person shooters which I have no intention of covering any further. Many apologies.

Instead its time to start digging beneath the mountain of todays teabagging dudebros and unearth the once beloved remains of Kyle Katarn, RoboHitler, and John Romeros head on a pole. Look upon their mighty works and despair, for these former kings of the genre have long since found themselves mercilessly bludgeoned to death by a crowbar wielding physicist, presumably because they lacked regenerating health. This was before we had those niggling details like checkpoints, narrative and cohesive level structure, instead being subjected to wave after wave of sprawling, switch laden mazes in search of fiendishly hidden keys. Uphill. In fifteen feet of snow. With fiendishly hidden yeti attempting to devour us. 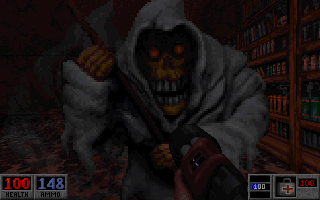 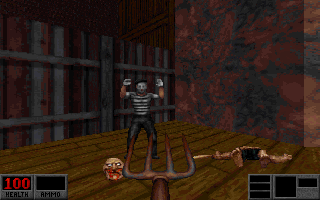 But to be perfectly honest, I was never a huge fan of these games. I mean if youre going to waste untold hours of your life hopelessly lost in some nonsensical labyrinth you could be playing Daggerfall instead and at least get to be a vampire spellsword assassin who rides a cool horse and inadvertently unmakes reality. That being said Ill make an exception for Build engine favorites like the outrageously crass Duke Nukem 3D and its less celebrated spiritual successor Blood, a humorously sinister outing that you might just fall in love with provided you enjoy abusive relationships. (If youve read any of my other reviews, clearly you fall into this category.)

Thus begins the tale of Caleb, an immorally immortal gunslinger straight out of the old west whos essentially Clint Eastwood by way of The Undertaker. A valued enforcer for the Unspeakable Cult of the Fallen God Tchernobog, he and his equally sadistic lady love were eventually betrayed and butchered (without references) because it turns out that the Father of Lies is kind of a dick. This state of affairs having done little to improve his disposition, our saint of killers subsequently claws free from his grave into what appears to be the 1930s looking to redecorate the walls with their collective entrails. 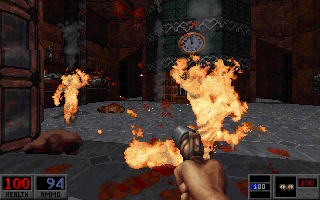 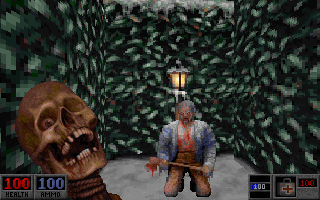 Of course the fact that Calebs unholy rebirth kicks off with a line from Army of Darkness suggests that this game isnt going to play its horrific atmosphere totally straight, and sure enough youll find more laughably excessive carnage and shout outs to cult horror movies than you can shake a freshly torn spine at. Take the veritable army of zombies that are incessantly tunneling out of the walls to charge you with pickaxes, all the time moaning for a taste of your delicious brains. You cant even turn your back after putting one down because its probably going to revive itself until you finally blow its head clean off and start punting it around like some sissy Briton footballer. The gibbering robed cultists prefer to gang up on you with Thompsons blazing but by whipping out your trusty flare gun you can start your own sort of blaze as they careen to and fro screaming It burns! It burns! before finally crumbling into ash.

When youre not busy chucking sticks of dynamite at hapless mimes you can also amuse yourself trying to pick out all the references that litter each area like so many barrels of Trioxin, from the iconic whispers while taking a dip in picturesque Crystal Lake to the haunted hedge maze complete with a frozen Jack Nicholson. The zombie infested shopping mall endlessly loops ear melting elevator music just like Dawn of the Dead; regrettably this never culminates in a pie fight against burly bikers. Even the Duke himself is hanging around, prompting our hero to start prodding him like a macabre tetherball. 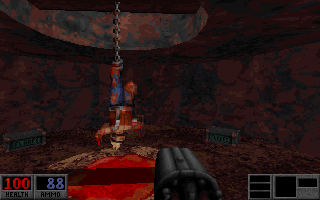 Shake it, baby.
Unfortunately people frequently criticize Blood for being less solid than Duke3D, by which they mean this game is fucking impossible. Even the easiest difficulty features ridiculous hordes of monsters mobbing you at every turn, any one of which can absolutely ravage your health in the blink of an (evil) eye. Swarms of disembodied hands that crawl around squeaking Ill swallow your soul are only amusing until the first time one of them latches onto your throat at the speed of light and the entire screen starts going dark  and I dont even want to remember the hellhounds that incinerate you the moment they appear. Stop making me remember!

Your survival depends on immediately switching back and forth between your arsenal for just the right weapon in each situation, scouring the map for all of the secret power-ups, and possibly checking the internet for a list of cheat codes. Dont worry; I wont publicly shame you or anything. Thats what Facebook is for. These sorts of hijinks arent exactly unexpected coming from a PC shooter of this era, the difficulty simply being as exaggerated as its content  hence in 1997 I would have been playing GoldenEye instead. Horror aficionados should give it a go for all the gooey bits, but veteran space marines will probably find that Blood is exactly their type.

If you enjoyed this Blood review, you're encouraged to discuss it with the author and with other members of the site's community. If you don't already have an HonestGamers account, you can sign up for one in a snap. Thank you for reading!

© 1998 - 2022 HonestGamers
None of the material contained within this site may be reproduced in any conceivable fashion without permission from the author(s) of said material. This site is not sponsored or endorsed by Nintendo, Sega, Sony, Microsoft, or any other such party. Blood is a registered trademark of its copyright holder. This site makes no claim to Blood, its characters, screenshots, artwork, music, or any intellectual property contained within. Opinions expressed on this site do not necessarily represent the opinion of site staff or sponsors. Staff and freelance reviews are typically written based on time spent with a retail review copy or review key for the game that is provided by its publisher.