I was not impressed with FEAR.

Sure, it's a solid first-person shooter with fantastic enemy AI and a riveting tale, but it didn't make the most of its intelligent foes. A good portion of the campaign consisted of battling test tube terrorists over and over again in about the same fashion. Also, a creepy girl sometimes appeared, along with other scary, but otherwise benign, sights. It wasn't until the game's climax that it began to pick up, and just as I was beginning to enjoy the ride, the story concluded with a cliffhanger. A facetious thought surfaced, and I snickered: "Maybe they'll improve the experience in the expansion packs." Yeah right. Expansion packs are never superior to the initial campaign.

FEAR: Extraction Point kicks off in much the same manner as its predecessor. You wander through shadowy hallways, you gun down clones, and build a small arsenal. The slow-motion capability, a la Max Payne, makes a return in this adventure as well. Although all of the original staples show up to play this time around, something is altered from the previous outing. When you stumble upon a collection of adversaries, they aren't always in the same arrangement. In the previous campaign, firefights broke out in spacious locales with plenty of obstructions to duck behind. This time around, there isn't always enough breathing room while in battle. Foes dart out from behind hallway corners or catch you unawares amidst a labyrinth of crates. Should you forget to scan any balconies in a certain hospital late in the campaign, scores of bullets will enter your body, fired by unseen assailants. You'll burst into a tiny laboratory and walk face-first into a shotgun blast that strips away oodles of your precious vitality, or charge into the cold night and stumble upon a small contingent that was hidden by bits of the environment. Let's just say that the quick save feature becomes your best friend not long after you begin the expansion. 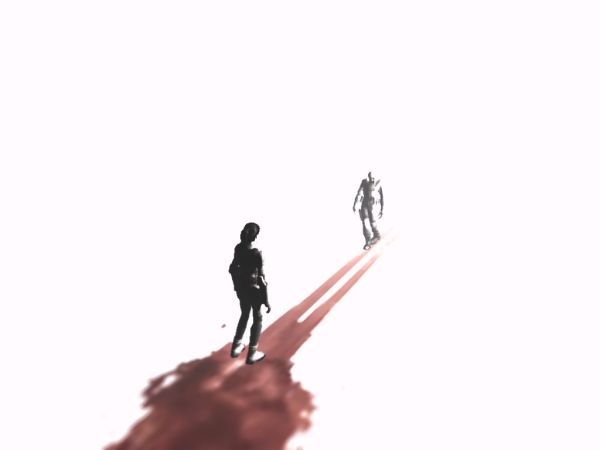 Bottom line: whoever developed Extraction Point was using more than smart goons to sell their expansion pack. They actually gave enemy arrangement some thought, and I found myself loving FEAR's various frays this time around, rather than sighing and applying roughly the same strategies repeatedly. My favorite situations were the ones where I felt hopelessly outgunned. I recall one predicament in which droves of terrorists stormed my location, leaping over fences and bleeding out from a nearby warehouse. Try as I might, they always got the better of me. After a few minutes of tinkering, planning, and tossing out numerous portable turrets, I was eventually able to fell the squads and advance, but man, was it a hell of a showdown! I'd drop one sucka, whirl around to off two more, take a bullet, slink into a distant corner, run headlong into another adversary who also met an untimely end, but not before plugging a lead reminder of our encounter in my body, lob a few grenades, then hope that the remaining forces wouldn't surround me.

What's even more pleasing about Extraction Point is that its horror elements don't feel tacked on this time around. Rather than glimpsing disturbing imagery now and then, demons arrive early on and express an interest in tasting your flesh. That's when your brandish the shotgun and give them what-for. Of course, the slow-moving specters from the original game are not your only paranormal woes. Extraction Point introduces semi-invisible goblins that dance around the vicinity, occasionally speeding towards you to chomp your sweet skin before skipping off into the farthest corners of the room. Perhaps the most intense scenes, though, include surreal romps through a ghostly alternate dimension that offers details regarding Alma's background. 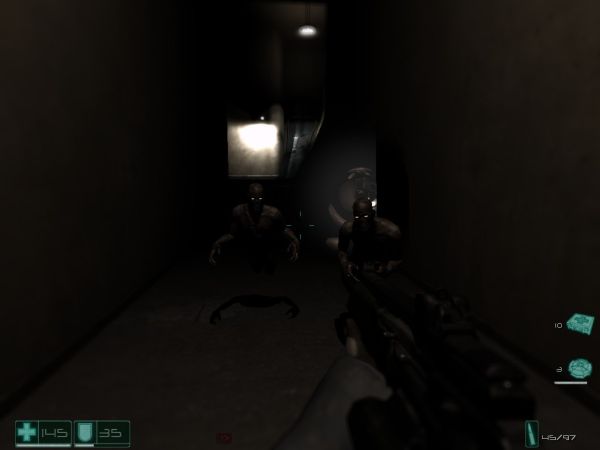 Understand, though, that I'm not saying that Extraction Point is perfect. Do you recall the powerful intellect that FEAR is supposed to be known for? Well, it's not always on full display this time around, as Extraction Point's nemeses are occasionally idiots. I've experienced instances in which patrolling gunners didn't spot me, regardless of the fact that I was right in front of them. What's even worse--or better, depending on your perspective--is that the clones this time around suck at throwing grenades. For instance, during one scuffle, they attempted to flush me out of an office by tossing an explosive through a window. The throw was way off, and the grenade struck a wall just before exploding, thereby setting off nearby flammable chemical barrels. After the initial din subsided, the only sounds were the dying screams of an immolated clone and one of his cohorts calmly instructing him to "keep it down."

Rather than ruing upcoming sessions with FEAR: Extraction Point, I actually looked forward to playing the expansion when I had the chance. This is actually the only time that I can say that I enjoyed a extra package more than its predecessor. It's just a shame that the events that transpire in Extraction Point were not ultimately adopted into the series' canon. A side campaign this effective should have easily been included in the overall storyline.
4/5

If you enjoyed this F.E.A.R.: Extraction Point review, you're encouraged to discuss it with the author and with other members of the site's community. If you don't already have an HonestGamers account, you can sign up for one in a snap. Thank you for reading!

© 1998-2020 HonestGamers
None of the material contained within this site may be reproduced in any conceivable fashion without permission from the author(s) of said material. This site is not sponsored or endorsed by Nintendo, Sega, Sony, Microsoft, or any other such party. F.E.A.R.: Extraction Point is a registered trademark of its copyright holder. This site makes no claim to F.E.A.R.: Extraction Point, its characters, screenshots, artwork, music, or any intellectual property contained within. Opinions expressed on this site do not necessarily represent the opinion of site staff or sponsors. Staff and freelance reviews are typically written based on time spent with a retail review copy or review key for the game that is provided by its publisher.