When seeing a title such as Corporate Lifestyle Simulator, chances are you imagine a game like Football Manager, where you go through countless screens of text selections, then sit back and watch the action play out on the pitch. Or maybe you're thinking of a game with a Sims-like set-up, working your character up in the business world by clacking away at the computer, talking at the water cooler, and going to meetings? Well, if your guess was close to any of those choices... then you'll be surprised when I tell you this is a pure action-fest, complete with 2D, oldschool pixel art on an isometric plain. Taking control of a mild-mannered worker of SuperCorp, your protagonist is thrust into a situation that forces him to battle countless employees-turned-zombies with his bare hands! 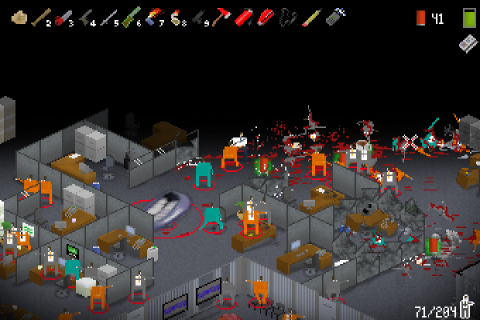 As much as I would have preferred a Die Hard fantasy setting with terrorists over the very worn out opposition of the undead, I'm usually willing to concede if the premise seems interesting enough. Well, using the word "interesting" is probably a bit extreme in this case, since CLS pretty much has you kill zombies nonstop for 27 stages. While starting out with just your hands, a wide assortment of weapons eventually make their way into your inventory, from a baseball bat and a stapler that sprays out its stock, to a handgun and shotgun. Occasionally, as well, there are timed power-ups that drop from the walkers, like unusual stuff such as shurikens and fire projectiles, or damage multipliers. There's even a 10X that rarely drops... which I luckily obtained in the final boss fight; suffice it to say, that sucker went down within seconds.

Going along with the blood and guts is the means to wreak havoc on the environments: busting vending machines, flinging chairs through glass, burning cubicles, and even breaking the kitchen sink. All this while fighting your way to the exit and rescuing humans with unique titles like Bud - Mouse Wrapper or Tina - Vending Machine Architect. They provide backup with their punches and kicks, but ultimately fall if surrounded. Shoot, the game even admits they're just meat shields! Now, when you combine the violent deaths of the walking dead with the wanton annihilation of office property, the game is a sight to behold in all its mock-Atari graphical glory. I know there are gamers out there who despise the retro look in some recent titles and wish the "fad" would die, but it's moments like these where I just want them to appreciate how something can still look pretty cool with such simplicity.

Though, one thing I won't defend about CLS are its jokes that usually fall flat and constantly make me squirm. It really feels like the person who made this just went for all the pop culture references he knows and jammed them in the game as random one-liners and cutscenes. Sometimes your protagonist just outright says the lines, like "Say hello to my little friend!", "Ice, ice, baby!", and "No soup for you!!", but he modifies them in other instances, such as "Livin' la vida zombies!" or "Can you smell what the dude is cooking?" Either way, listening to him go on like this for 27 stages is really cringe-worthy, especially when shouting quotes every five seconds. Graciously, you can turn the Dude Tough Talk volume (actual name) to mute in the options, and even more, you can skip the obnoxious, deadpan, self-aware cutscenes that play at the start of every stage. 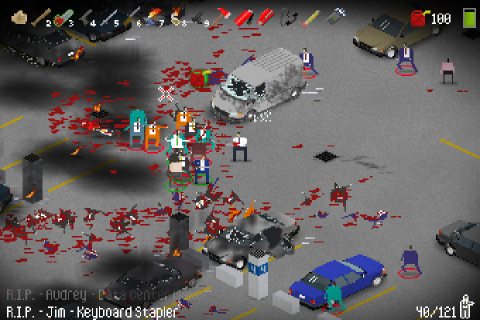 Ultimately, too, the mechanics and design of the game are severely lacking anything beyond just nonchalantly killing off zombies in huge office rooms. If you're strictly looking for something that doesn't evolve past a simple slaughter-fest, then sure, CLS satisfies, but I had hoped for a bit more variety to go with it. The rogues gallery is just business suit zombies, with some slightly stronger than others to kill based on color. There's tiny variations, like giant mouth floor traps or rainbow suction holes (because video games), but these barely show up as is, so I wonder why they're included at all. And outside the quirky, supernatural boss fights, there isn't even that much strategy involved when battling flesh-eaters; simply keep your distance if you have a projectile weapon, which can fire through walls, or make sure you don't get surrounded with a melee weapon, which is very easy to do since you move fast.

Another contributing factor I think helps the game feel bland and repetitive is the disappointing damage ratio of your weaponry. Like, when I first got hold of the chainsaw, I was gleefully rushing towards my first zombie with it, then got completely bummed when it took just as long to kill as with a bat, an item you get in the very early stages. This pattern sadly continues throughout the game's run, and it's not really even the weapons' fault; CLS seems to mimic a trait that some RPGs have a terrible habit of doing, where, whenever your character levels up, enemies also level up to keep things equal. The weapon's strength is basically cancelled out because a stronger zombie type is immediately introduced to counter. I'm not saying make all the enemies super weak, but there needs to be some type of balancing act, like minimizing ammo usage for the stronger weapons to make them "special moves" or something. Anything!

That's not to say that CLS is a lazy product, since effort has been placed in certain aspects. Though, usually in areas I'm not elated about, such as the outrageous amounts of one-liners. The levels also change up sometimes, like when you have to navigate a dark office or parking lot with just a flashlight, but not as much variation as you'd wish in 27 stages. The techno-ish soundtrack is pretty bangin', fitting surprisingly well with the chaos, and as I write this, I'm actually contemplating purchasing a download. I just would've liked a little extra fulfillment in areas that needed the love. And a two-player mode would've been awesome, now that I think about it. But, if you downright want some mindless action, which I consider humorous considering the subject material, then think about giving Corporate Lifestyle Simulator a shot. If you do, remember: you can mute the jokes. 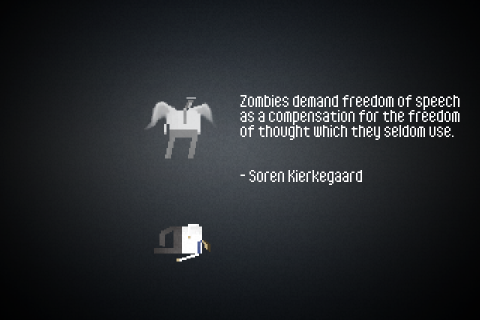 If you enjoyed this Corporate Lifestyle Simulator review, you're encouraged to discuss it with the author and with other members of the site's community. If you don't already have an HonestGamers account, you can sign up for one in a snap. Thank you for reading!

© 1998-2020 HonestGamers
None of the material contained within this site may be reproduced in any conceivable fashion without permission from the author(s) of said material. This site is not sponsored or endorsed by Nintendo, Sega, Sony, Microsoft, or any other such party. Corporate Lifestyle Simulator is a registered trademark of its copyright holder. This site makes no claim to Corporate Lifestyle Simulator, its characters, screenshots, artwork, music, or any intellectual property contained within. Opinions expressed on this site do not necessarily represent the opinion of site staff or sponsors. Staff and freelance reviews are typically written based on time spent with a retail review copy or review key for the game that is provided by its publisher.