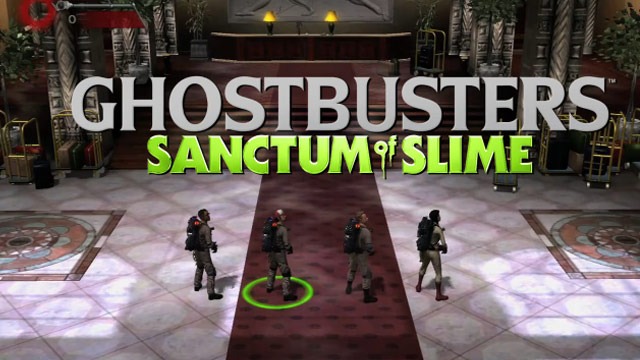 Everything that's wrong with Ghostbusters: Sanctum of Slime is on full display in that particular level. Outside of that ordeal, the game seems like nothing more than a mediocre shovelware action title. It sports an overhead view and plays like most zombie-filled shooters released over the past few years, and little of Sanctum of Slime's content will strike you as a major flaw or a poorly implemented concept. Then you reach Level 10, a stage that can best be described a perfect storm, and you realize just how horrible the game truly is.

The first indication of things going south, at least mechanically, comes when you realize that Sanctum of Slime is chiefly a co-op game. Blasting through its campaign solo is pretty much suicide, and not because you're alone, but because you have three complete imbeciles watching your back. Your partners have a tendency to obstruct your beams, preventing you from properly nailing your targets. This is especially frustrating when you're attempting to slay massive contingents of undead foes, as your compatriots prevent you from efficiently thinning the oncoming crowd of ghouls. Worse, your friends love jumping into legions of baddies without any care for self-preservation. As you can imagine, they often wind up incapacitated. 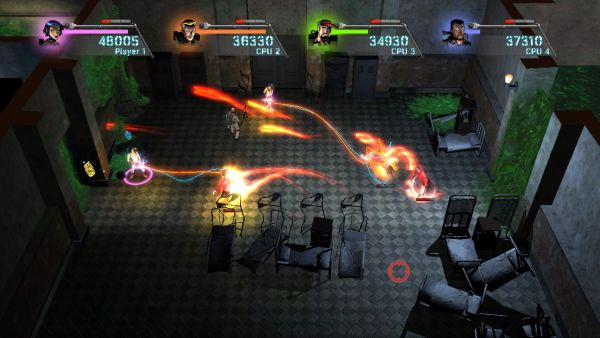 Oh, but that's not the worst of your cohorts' stupidities... You don't actually realize how dumb they are until you perish. When a character falls, any of his partners--even those controlled by the computer--can revive him in a fashion similar to Left 4 Dead. Should all four players fall, the game ends and you must restart the battle in which you're currently engaged. That might sound like a fair enough system, until you watch your computer-controlled allies attempt to resurrect you. Sometimes the they decide to do so when your dying body is surrounded by specters. Instead of preserving themselves, which they ought to do, they fly into the throng and begin to administer CPR until the spirits murder them as well. In other occasions, I've noticed my buddies would not fully commit to reviving me when they easily could have. For instance, one Ghostbuster came to my aid, began the revival process, then quit halfway into it to open fire on an enemy that wasn't anywhere in the vicinity. Heck, there was even an occasion in which an ally ceased reviving me so he could revive a different teammate.

The obvious solution is to not die, right? Ha, if only... Not only are your adversaries plentiful in Sanctum of Slime, but even the weakest goons can dish out a fair amount of damage. For example, there are slime-covered zombies called "snombies," which can drop you with two or three blows. There are even some beasts who can easily one-shot you, sometimes with attacks that appear to be standard swipes or jabs. Suffice it to say that, thanks to immense crowds, idiotic partners, and crushing blows, you will die a lot, no matter how well you play. 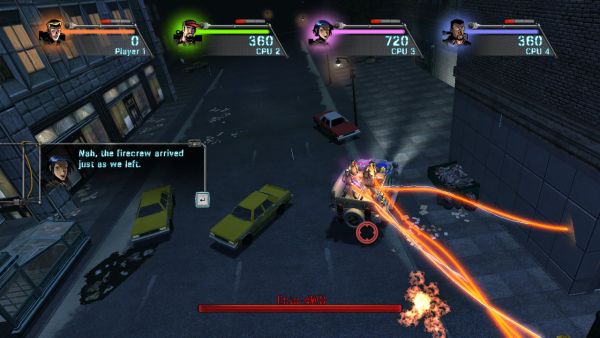 Similar shooters tend to provide you with an arsenal crafted to handle a variety of situations. Sanctum of Slime, on the other hand, equips you with three weapons, two of which are terrible, and none of which are useful for controlling the aforementioned crowds. Along with the classic red proton beam, you also get a yellow "shotgun" blast and bouncy blue orbs. The former is the worst of all, as its fire rate is insanely slow and it deals very little damage. Taking out even minor foes requires scores of shots and a lot of time, something you can't always afford when you've got a massive horde of undead creatures surging towards you. Blue balls (heh heh), on the other hand, fire a tad faster and dish out a bit more pain, but are unreliable in terms of accuracy. Half of the time, they miss their target or nail an obstruction.

Forgoing the two sucky weapons is not an option. You see, the only way to defeat most enemies is to nail them with a shot corresponding to their color scheme. In other words, red snombies only vanish if you give them a taste of the red beam. Furthermore, your opponents seldom come in a single flavor per fight, and you'll find yourself repeatedly switching between the three blasters, struggling to keep your head above water while avoiding their devastating attacks. Worse yet, the game has a tendency to auto-target ghosts, which leaves you constantly attacking phantasms with the wrong colors.

All of the above factors come to a head in a horrifying way once you reach the tenth mission and its humongous legions of spectral foes. Dealing with that stage's seemingly endless onslaught becomes tiresome when A) you have to continually switch weapons every few seconds, B) some of your arsenal is slow as all get out, not to mention weak; C) you're constantly taking hefty amounts of damage, D) you can't rely on your moronic allies, who are either always dead or too stupid to properly revive you; and E) you can't keep the crowds down for anything, either because you lack the tools to do so or because the game won't stop auto-targeting the wrong enemy. I almost rage-quit the game because of level ten, and not just because it was a difficult stage... 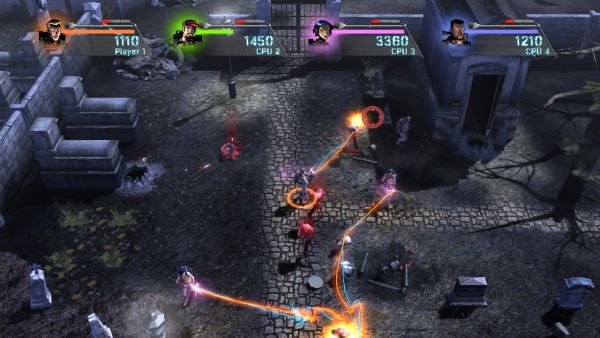 Sanctum of Slime is your standard, linear, no-frills action title. Each level flows like this: you enter a dull room, you blast a bunch of ghosts, you exit the dull room, you enter a drab chamber, and the process begins anew. The game's all around design is banal and lazy.

Out of all the sins that Ghostbusters: Sanctum of Slime commits, though, I saved the worst for last. Ponder on this: why do gamers play licensed titles? What's the best part about playing games starring characters like Batman or Drizzt or Godzilla or Daryl Dixon or Hannah Montana? I think it's because such games give fans the opportunity to admire their favorite characters by assuming their roles. Now imagine playing a Batman game where the protagonist isn't Batman, or even Robin. Instead, it's some contrived vigilante who happens to inhabit Batman's universe. That's what occurs in Sanctum of Slime. If you've been wondering up to this point why I haven't referenced Peter, Ray, Egon, or Winston, it's because they've been relegated to supporting cast. Instead, you control one of four newly hired rookies, created exclusively for Sanctum of Slime. They're not the classic Ghostbusters, or the Extreme Ghostbusters, or even Filmation's Ghostbusters. Instead, you get to select from a quartet of characters who have nothing to do with the franchise, added to the brand for absolutely no good reason.

When a license title fails to deliver on even the most basic front--allowing the player to assume the role of one of the main characters--that's a sure sign that the game will blow. And believe me, Ghostbusters: Sanctum of Slime certainly does.
1.5/5

If you enjoyed this Ghostbusters: Sanctum of Slime review, you're encouraged to discuss it with the author and with other members of the site's community. If you don't already have an HonestGamers account, you can sign up for one in a snap. Thank you for reading!

© 1998-2020 HonestGamers
None of the material contained within this site may be reproduced in any conceivable fashion without permission from the author(s) of said material. This site is not sponsored or endorsed by Nintendo, Sega, Sony, Microsoft, or any other such party. Ghostbusters: Sanctum of Slime is a registered trademark of its copyright holder. This site makes no claim to Ghostbusters: Sanctum of Slime, its characters, screenshots, artwork, music, or any intellectual property contained within. Opinions expressed on this site do not necessarily represent the opinion of site staff or sponsors. Staff and freelance reviews are typically written based on time spent with a retail review copy or review key for the game that is provided by its publisher.