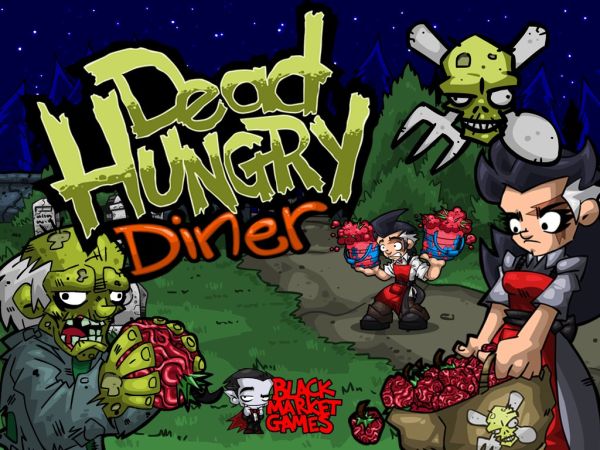 I've never been one to dismiss a title that seemed geared towards mobile gamers. Although I wouldn't say I'm big into casual games, I do dabble in that field from time to time. Were it not for these excursions, I wouldn't have discovered a fantastic distraction like Dead Hungry Diner, in which you assume the role of a pair of orphans, Gabby and Gabe, who run a late night restaurant that caters to all manner of monstrosities.

Running such a joint wasn't originally in the youngsters' plans. You see, they live in a town plagued by zombies, vampires, werewolves and the like. Initially, the only defense the burg had against the forces of darkness was a prima donna creature slayer named Vanda. That changed when the monster-serving duo found themselves outside the orphanage past curfew, and a herd of living corpses cornered them. Out of desperation, they tossed a brain-shaped berry at a ghoul, who devoured the morsel, tossed the kids a coin, and vanished. Realizing that the town's monster problem could be remedied by feeding the hungry beasts, the twins thus decided to open the aforementioned eatery, unfortunately cutting into Vanda's workload--and thereby depriving her of the fame she sought. 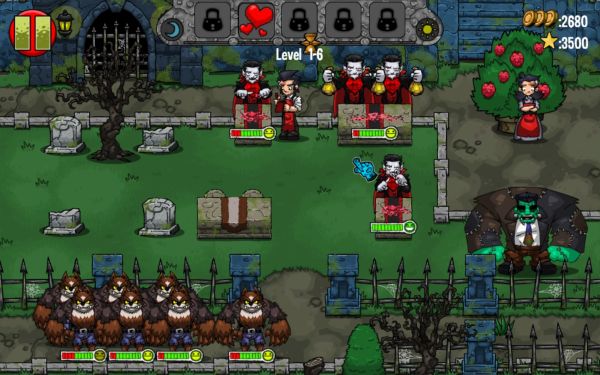 Waiting on demons may sound a tad complicated, but it's actually quite simple. When a creature arrives, you seat it and wait for it to finish browsing the menu. After it's decided on what it wishes to eat, you take its order, deliver it to your sibling, and wait until the dish is prepared. Once it is, you can then nab it and deliver it to the customer. After noshing on brain berries, the monster will pay its bill and leave a dirty table for you to clean, which you accomplish by clicking on it. The trick is to pull off as many of the same actions in a row as possible, thereby building bonus multipliers. For instance, if you clean three tables in a row, you'll snag a "times two" and eventually a "times three" multiplier, boosting your score all the more. Scoring enough bucks brings you closer to earning the minimum amount of cash needed to complete the stage, so combos are essential, especially later in the campaign.

Of course, you seldom deal with just one fiend at a time. Monsters tend to arrive in pairs, and even trios. In order to properly seat them, you have to place them at a table that suits the size of their entourage. Sure, you can sit a single zombie at an extra long table, but should a trio of banshees make an appearance, they may have to wait a while before dining. This can be troublesome, because monsters tend to storm off when they become too irritated. That's less money for you, and a slight chance that you may fail the stage.

To make matters worse, some monsters are naturally tough customers. For example, red zombies and banshees grow impatient quickly, which can cause you to lose their patronage if you don't serve them in short order. As if the situation couldn't grow any grimmer, some creature types don't get along well, and thus can't sit next to one another. Vampires, as it turns out, hate werewolves. Seating them within close vicinity of each other can cause a fight to break out, which then leads to Frank--the twins' bouncer, who resembles Frankenstein's monster--booting them out of the eatery without collecting payment. Thankfully, some monsters can be placated by placing them next to a species they admire. Werewolves, as you can imagine, love skeletons, and will ignore any nearby vampires when seated next to the bony beasts. 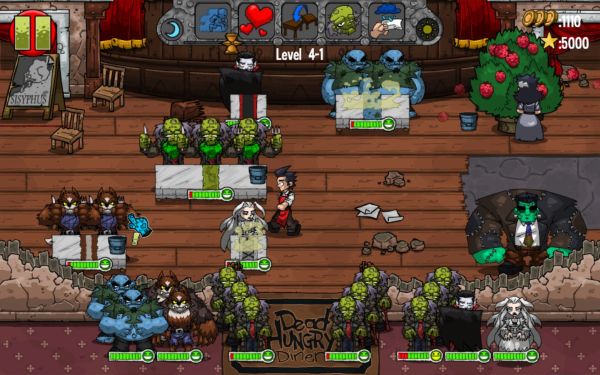 There is one more trick to aid in keeping you out of hot water: magic. As you advance through the game, you collect coins that can be used to purchase and upgrade spells, each of which is incredibly useful. Some will allow you to transform any monster type into a zombie, thereby allowing you to seat anything next to them. Another ridiculously boosts your speed, allowing you to take orders and serve grub almost instantaneously. One that I found especially helpful improved a creature's mood, which kept it from growing irate. Best of all, if you cast that spell on a line of unseated monsters, they all benefit from it instead of just a clique of beasts.

If there was any problem that I had with Dead Hungry Diner, it was that there was a lot to remember for such a casual game. At times, it was almost stressful trying to run a tight ship while recalling a plethora of obscure rules. It wasn't a huge problem, though, as I eventually managed to adapt to the game's fast pace and even finish the campaign.

In fact, I found the game engaging enough that I was terribly hooked on it. I would come home from work and all I could think of was padding downstairs to sneak in a quick session, which usually turned into an extended one. You're constantly planning, plotting, using your brain on the fly, and attempting to reconcile mistakes. Time seems to go out the window while you rush to keep up, daring yourself remain above water and not let the torrent of starved prowlers overwhelm you. For me, it was almost zen-like. I went into a zone, focused on what was ahead of me, and before I knew it I heard the tone signifying that I had met the minimum amount of cash to pass a stage. 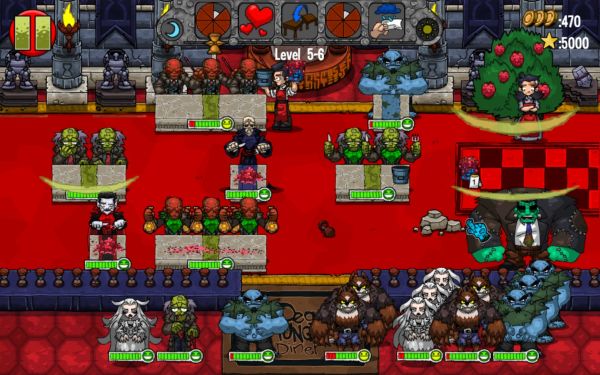 A title like Dead Hungry Diner shouldn't last long. Thankfully, the game wraps up before it grows tiresome, taking up around four hours total. Although I was glad to be done by that point, I will say that I greatly enjoyed those four hours. Dead Hungry Diner is not a game that begs to be turned into a major project. It's a title you save for a rainy day, allowing you to forget about your cares for a few hours so you can hang out with some ogres, zombies, and mummies. That sounds like a perfect afternoon to me.
4.5/5

If you enjoyed this Dead Hungry Diner review, you're encouraged to discuss it with the author and with other members of the site's community. If you don't already have an HonestGamers account, you can sign up for one in a snap. Thank you for reading!

© 1998-2020 HonestGamers
None of the material contained within this site may be reproduced in any conceivable fashion without permission from the author(s) of said material. This site is not sponsored or endorsed by Nintendo, Sega, Sony, Microsoft, or any other such party. Dead Hungry Diner is a registered trademark of its copyright holder. This site makes no claim to Dead Hungry Diner, its characters, screenshots, artwork, music, or any intellectual property contained within. Opinions expressed on this site do not necessarily represent the opinion of site staff or sponsors. Staff and freelance reviews are typically written based on time spent with a retail review copy or review key for the game that is provided by its publisher.